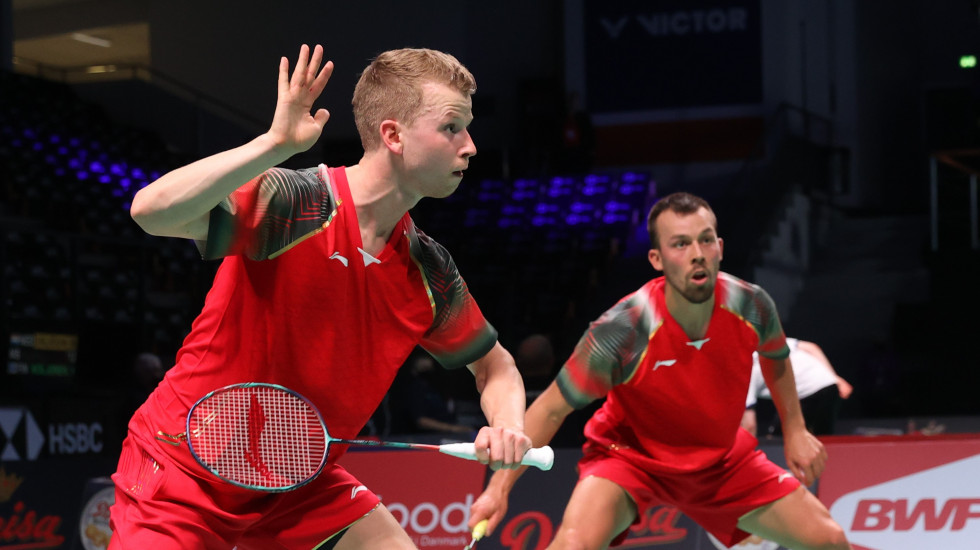 Home favourites Kim Astrup and Anders Skaarup Rasmussen got straight back to it after a long hiatus from tournaments with a straight-games win at the DANISA Denmark Open 2020 today over Canadian men’s doubles duo, Jason Anthony Ho-shue and Nyl Yakura.

Having last played at the YONEX All England Tournament in March this year, the return to badminton is as special to the fans, as it is to the players.

“It feels great to be back playing here at the DANISA Denmark Open 2020. It’s a good first win for Anders and I. We are satisfied with performance today and we look forward to our match on Thursday,” said a delighted Astrup.

Astrup and Rasmussen took the first game on fine form, but the second saw the Canadian duo fight back to lead 15-11 at one point.

“We were just fighting it out at one point, but we took some deep breaths and remained calm and adjusted a bit. I think we played fine. There’s no harm in struggling for a short period,” revealed Rasmussen post-match.

It’s been a good while since BWF have been able to host tournaments with a global pandemic on. Asked how training has been for the players during the enforced break, Astrup laughed saying, “We feel match fit, but it has been a very long period of just practicing and no travelling.

“We are very happy to be back on court and playing tournaments again.”

“I think there are a lot of new measures for this tournament to happen and we are doing our bit to encourage everyone to stay safe, but when you’re on court, you’re maybe used to some different opponents . We have the same goal as always, which is to be as good as possible, and hopefully claim some victories,” said Rasmussen.

Not since 2010 has a Danish men’s pair taken the title on home soil at the Denmark Open. The duo, in sync said “they hope to go all the way”.

So how much does a home advantage really help?

“We feel we have a lot of supporters in the arena, at home, behind screens cheering for us and staying safe. There may not be the usual full stadium, but we can feel the support and love,” Astrup replied with a big smile.

“Being a leftie for Kim is an advantage – he can hit harder because the racket is closer to his heart,” quipped Rasmussen.