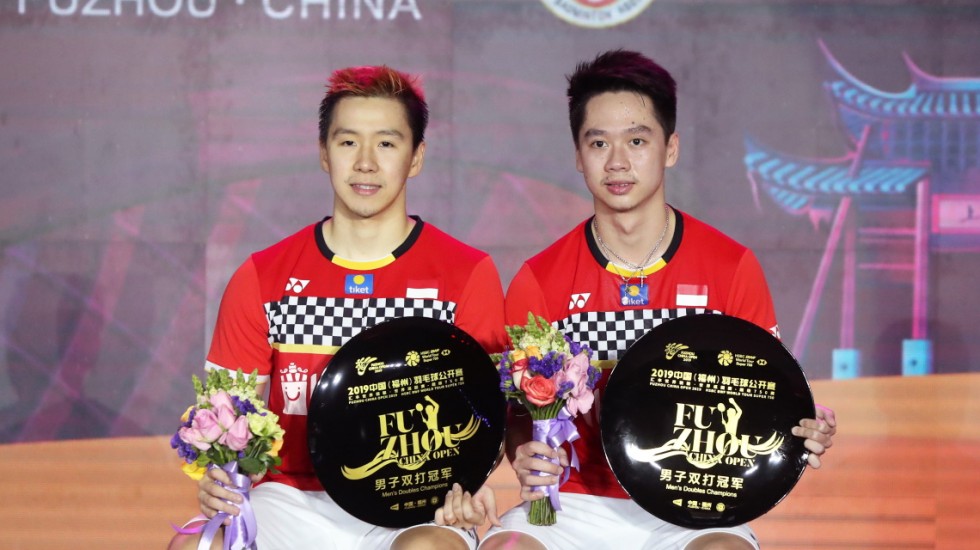 The Minions were on fire yesterday in the men's doubles final.

Once the keenly-contested opening game was in their bag, it turned into a Minions show. The Japanese cracked under the pressure of high-flying Indonesians, whose quick-fire returns and outrageous interceptions never gave them any breathing space.

“In the second game, Kevin won a lot of the rallies and they played in a hurry too, so they immediately lost their focus,” said Gideon.

“We are happy with our performance, we feel we could enjoy the game and perform quite well. At the beginning of the year, we felt that we were not on track, but we worked on our problems and overcame them. We want to keep learning and improving.”

“We are certainly happy to win this tournaments four times, it’s extraordinary,” said Sukamuljo. “We keep trying to maintain our motivation and do not want to be easily satisfied.”

The only surprise of finals day was the mixed doubles match, which saw second seeds Wang Yi Lyu and Huang Dong Ping pick up only their second victory in 12 clashes against world champions Zheng Si Wei and Huang Ya Qiong. It was perhaps the most below-par performance of the world champions over the last two years.

The match was the shortest of the five finals, ending 21-14 21-13 for Wang and Huang. The world champions were below their best, unable to crank up their energy levels, but refused to give any excuses.

“Everyone is improving fast and our standards are on par, so it boils down to tactics. We made many errors today and were on the back foot most of the time,” said Zheng.

In women’s doubles, second seeds Yuki Fukushima and Sayaka Hirota outgunned fourth seeds Lee So Hee/Shin Seung Chan 21-17 21-15 in 49 minutes. It was their fourth title of the season and their first since the Indonesia Open in July. They thus became the first Japanese women’s doubles pair to win the China Open in Fuzhou.

“It has been a while since we last won a title, so I’m very happy,” said Fukushima.

“At the French Open, the Koreans were very strong and aggressive, so we were actually a bit fearful. This time round, we overcame the fear and played hard. I defended well when our opponents were attacking relentlessly. This is the area of my game that I’m happy with today.”