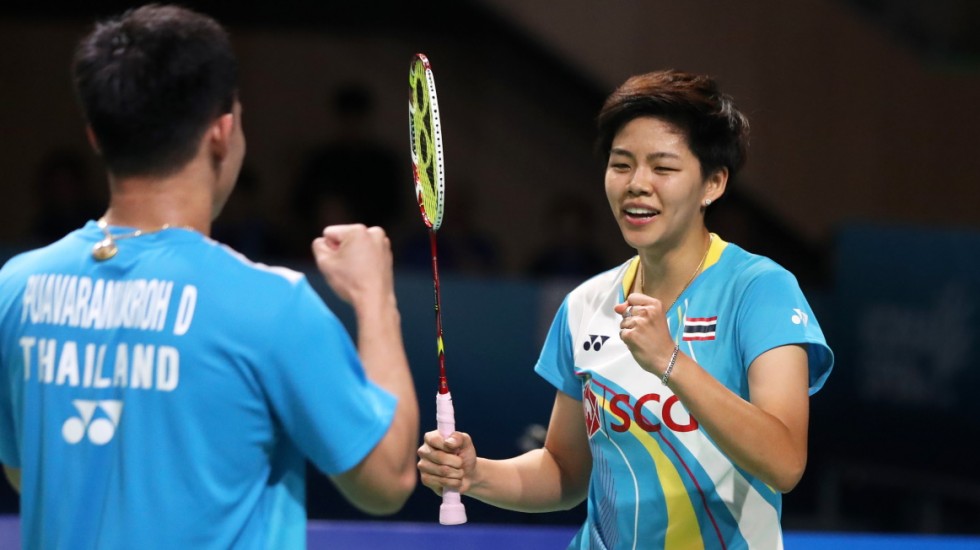 The Korea Open is only the second title this year for Puavaranukroh and Taerattanachai.

Zheng Si Wei and Huang Ya Qiong’s spotless record in finals this year – six wins from six finals – came to an end yesterday at the Korea Open 2019 where they ran aground against Dechapol Puavaranukroh and Sapsiree Taerattanachai in just 34 minutes, 21-14 21-13.

In beating Zheng/Huang, the Thais became the first pair to record two victories over the world champions, and the first from their country to win the Korea Open in any category.

It did take an extraordinary effort from the Thai pair though, and an inconsistent show from their rivals, for the historic win to materialise. Taerattanachai was in her element, and with her electric movement at the front, she overshadowed Huang Ya Qiong – no mean feat. Puavaranukroh converted most of the opportunities that were set up, his angled smashes regularly punching holes in the Chinese defence.

The usual intensity was somewhat missing from Zheng and Huang, and the Thais converted the fourth of their ten match points, reversing the one-sided verdict from their last meeting in the World Championships final.

“We’re happy because we won our second World Tour title,” said Taerattanachai. “In the World Championships, we didn’t play to our plan and defended a lot. This time we attacked and they were forced to defend. We now have more confidence and we just want to try out best at every event.”

Huang acknowledged that they didn’t quite anticipate what unfolded.

“We were not in a good situation. Our opponents’ speed was higher than ours, and they were better than us overall. We need to have a detailed review and watch the video and prepare well for next time,” said Huang.

This was only the second title this year for Puavaranukroh and Taerattanachai, their first being the Singapore Open, where they incidentally beat Zheng/Huang in the semifinals.