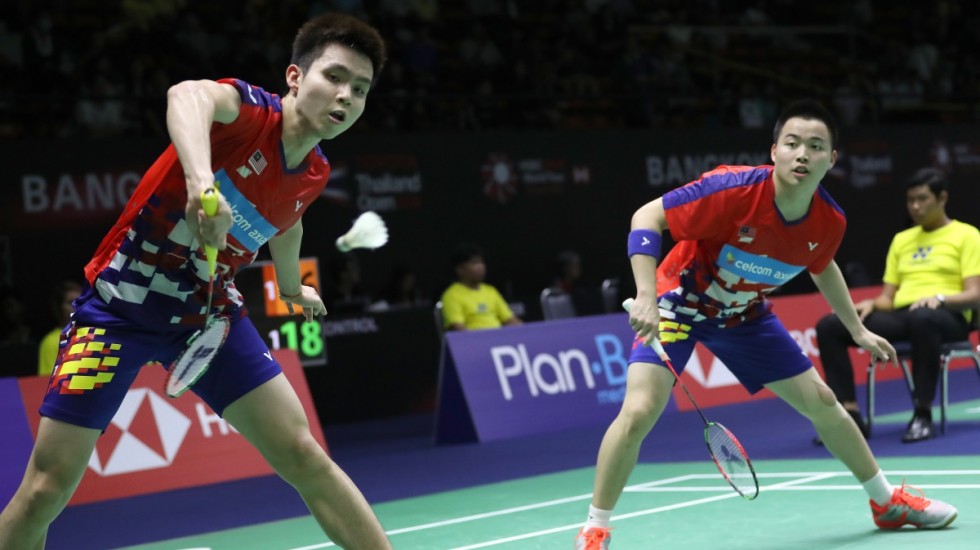 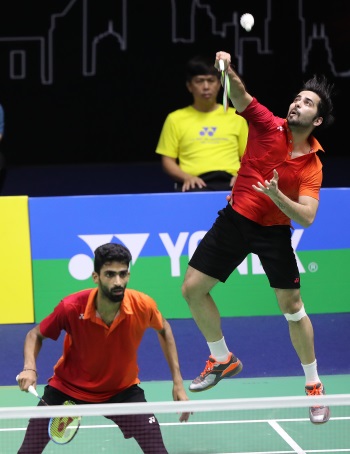 round match at the TOYOTA Thailand Open 2018 today in Bangkok.

The Japanese survived a cracker of a battle against India’s Sumeeth Reddy and Manu Attri. The match was poised on the edge for over an hour before the Indians blinked first to give the Japanese victory at 22-24 21-13 21-19.

The Indians were unintimidated by their higher-rated opponents, maintaining a quick tempo in the exchanges and managing to keep the attack, much to the frustration of Endo and Watanabe. The lightning-quick Watanabe was kept quiet, with Reddy dominating the net, while Attri was tireless at the back. It was Endo’s greater experience that helped the Japanese edge ahead at the death.

Reddy was disconsolate despite the fine game he’d had: “Maybe it was one of our best matches. We’d played some matches like this a couple of years back, but it’s one of our good tournaments after a while.

“We’re getting our rhythm back. The important thing is we should’ve got those two points (at the end), that was the point of all the training. We’ve watched their matches, but we went in without specific plans, as it’s different on court, and you need to respond to what happens. Endo played a good game today, he was the one who kept pressure on us.”

No.2 seeds Lee Jhe-Huei and Lee Yang of Chinese Taipei exited the event to Malaysia’s Aaron Chia/Soh Wooi Yik (featured image) in three games, but the result was no surprise to the vanquished pair as Lee Yang has only recently come back from mandatory military duty and they haven’t had time to practice. 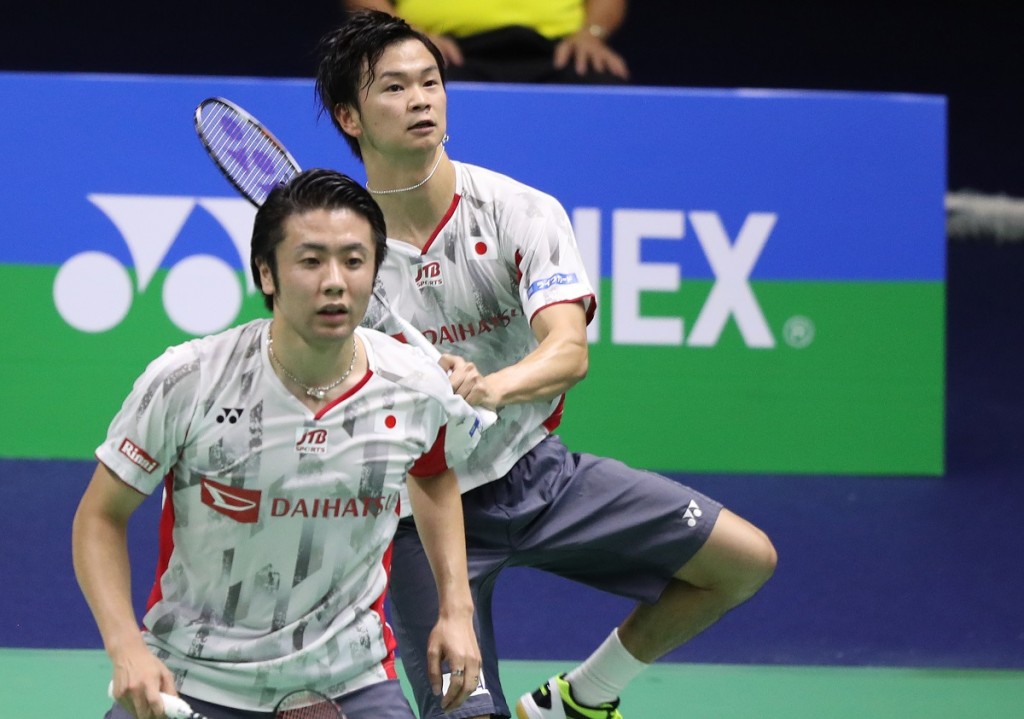 It was a disappointing day for Chinese Taipei in the category, as No.6 seeds Lu Ching Yao and Yang Po Han followed their compatriots out of the event, losing 21-17 21-15 to Indonesia’s Wahyu Nayaka Arya Pankaryanira/Ade Yusuf Santoso. However, Liao Min Chun/Su Ching Heng did ensure Chinese Taipei’s presence in the quarter-finals, where the fifth seeds take on top seeds Takeshi Kamura/Keigo Sonoda (Japan).

Women’s Singles seventh seed Beiwen Zhang had a roller-coaster ride in her second round against Indonesia’s Dinar Dyah Ayustine. Having won the opening game, Zhang was down by a long way in the second at 2-11 and 10-17. The USA player recovered her wits and was eventually a comfortable winner at 21-16 19-21 21-11.

“It was so hard to play with the wind – everything was going out, and I couldn’t control anything in the second game,” said Zhang. “It was much more windy today compared to yesterday. My serves were going out by a metre. I’m happy with the way I recovered. 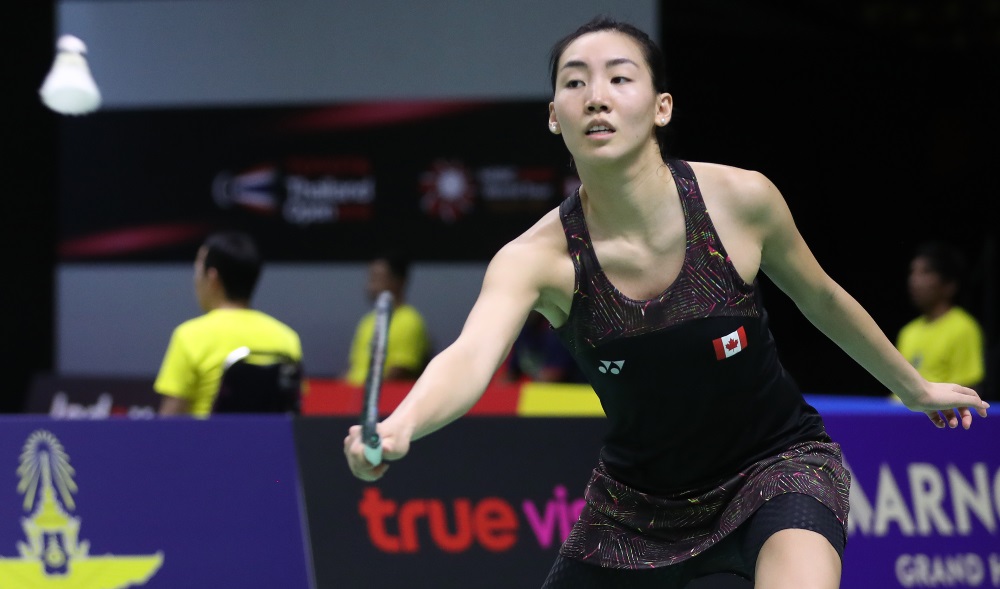 As an afterthought she added: “Maybe I think too much on court. I have a coach in Singapore now and so I want more. It’s not that easy. Even if he tells me what to do, it’s hard to step up. After winning the India Open, I want to be at that level, so it’s the pressure from within. Against these kind of players, I’m in a rush, I want to finish the game fast, but it shouldn’t be like that. I have to be patient.”

Li was through after a tight finish against home favourite Busanan Ongbamrungphan. The Canadian had 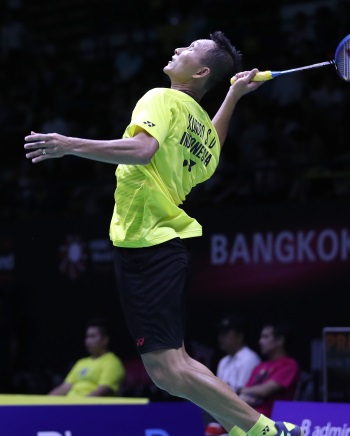 the lead throughout the decider, but Ongbamrungphan stayed in sight, saving two match points before faltering on the third, 15-21 21-12 21-19, to help Li make her first World Tour quarter-final this year.

“Overall, I was able to keep my calm even when I was making mistakes,” said Li. “She had the crowd and I tried to focus on my game. I tried not to think of the score.

“This is my first quarter-final in a World Tour event this year. It feels good. I always lose in the Round of 16 and I have a lot of chances. This is one of them and I’m happy I finally got to the quarters. Physically I’m okay, but mentally it does get exhausting to play so many tournaments, but I have to make sure I practice and adjust as well as I can.”

Indonesian veterans Sony Dwi Kuncoro and Tommy Sugiarto showed there was plenty of fight left in them still, as they made the Men’s Singles quarter-finals.

Kuncoro, who started in the qualifying draw, made short work of fourth seed HS Prannoy (India), 21-18 21-14, in just 35 minutes, while his compatriot showed characteristic stubbornness in fighting past local hope Tanongsak Saensomboonsuk, 19-21 21-18 21-16.

It was a good day for Thailand in the category, with three Thais – Khosit Phetpradab, Suppanyu Avihingsanon and Kantaphon Wangcharoen – making the quarter-finals. Phetpradab won an eventful battle over England’s Rajiv Ouseph; the Thai saw his opponent save five match points in the opening game, but kept his head to gain the lead, and built on that momentum to an easy second game victory: 23-21 21-13.

Two Japanese – Kanta Tsuneyama and Kenta Nishimoto – made the last-eight with three-game victories. While Tsuneyama saw off the challenge of India’s Parupalli Kashyap, 21-18 18-21 21-19, Nishimoto prevailed over Chinese qualifier Lu Guangzu 21-16 20-22 21-19. 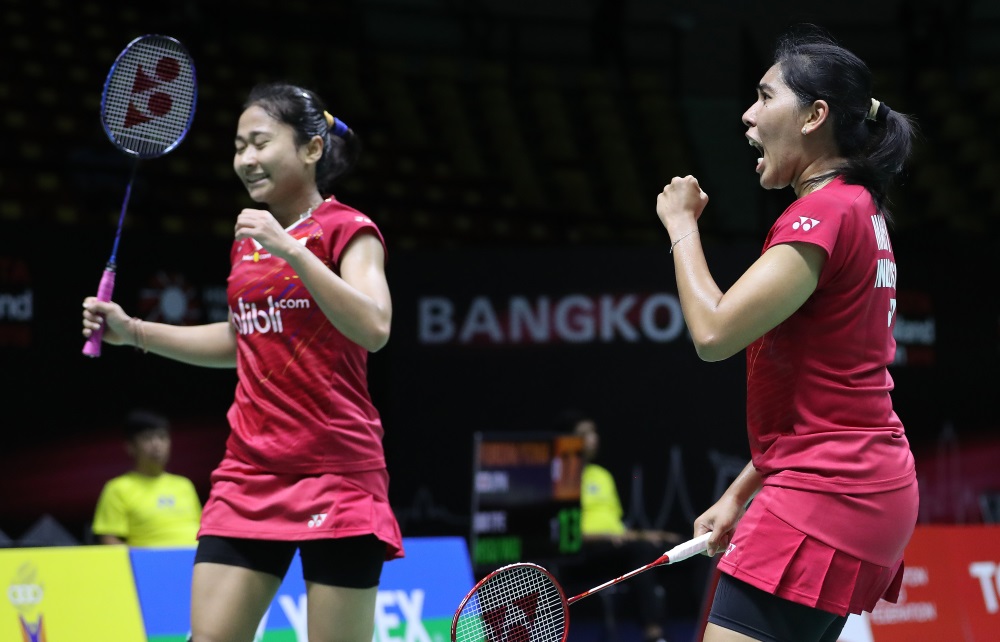 Japanese domination of Women’s Doubles was starkly in evidence, as all five of their pairs booked quarter-final spots. The only pair of the five to be extended to three games was Naoko Fukuman/Kurumi Yonao, who were stretched by Chinese Taipei’s Hsu Ya Ching/Wu Ti Jung, 12-21 21-17 21-14.