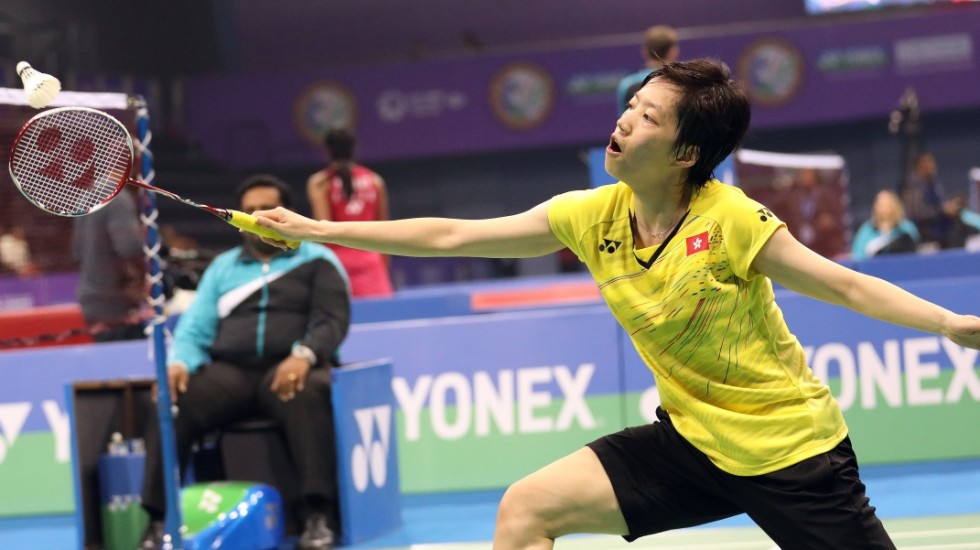 Carolina Marin to enter the semi-finals of the Yonex-Sunrise India Open 2018 today.

And with Beiwen Zhang causing more ripples with a straight-games defeat of home favourite Saina Nehwal, Friday was an eventful day in Women’s Singles.

Cheung (featured image) caught Marin off-guard in the opening game and kept a tight leash at the end of a tense second game to make her first semi-final since the 2017 Macau Open in November. The Macau Open, however, had been an aberration through much of 2017, as Cheung had fallen in several first rounds. The 24-year-old Hongkonger couldn’t hide her delight at getting the better of Marin, and rated this the best win of her career.

“Last year I didn’t do so well, so there was a lack of confidence,” said Cheung. “It’s the first time I’m beating an Olympic champion, so this is the biggest win of my career. I made a couple of semi-finals in 2016 but last year wasn’t so good. Last year was frustrating for me because I didn’t play well in many tournaments.

“Today I didn’t think too much. So this year I hope I can start well, and today I beat Marin and I feel my confidence is coming back. I think sometimes it’s normal to have peaks and lows and I just persisted and hoped I could break through soon and happy I could do it. I felt I was quite determined today. I felt my chances were coming and I tried to keep calm.”

Marin’s compatriot Beatriz Corrales raised visions of a Spanish upset after she took a game off home heartthrob Pusarla V Sindhu, but the Indian shrugged her off early in the third and it was one-way traffic from there: 21-12 19-21 21-11. The semi-final will be a battle of current and former India Open champions as Pusarla takes on Thailand’s Ratchanok Intanon, who had little trouble against Hong Kong’s Yip Pui Yin, 21-11 21-11.

Pusarla’s was only one of two wins for the hosts, who witnessed most of their contenders bite the dust. Nehwal was totally off-colour against Zhang and crashed out in 32 minutes. Even Zhang seemed surprised at the quickness of Nehwal’s capitulation, and the USA player revealed that she herself was far from fit due to a foot injury she suffered in early January.

Verma ran into defensive wall Iskankar Zulkarnain of Malaysia, who continued his remarkable run from the qualifying rounds into the semi-finals. The Malaysian was last in a semi-final over a year ago.

“It’s my first semi-final since the China Open (2016), it will give me confidence,” said Zulkarnain. “It’s been tough for me because the fans and management have pushed me to get good results. Coach Misbun came to the team seven months ago; he’s like my father. We talk all the time, and we’re quite close. It’s made a big difference to me in this tournament.” The quarter-finals in the top half saw Chinese Taipei’s Chou Tien Chen blow away Sai Praneeth 21-15 21-13, while China’s Qiao Bin was just as dominant over Parupalli Kashyap. Zulkarnain’s semi-final opponent will be China’s Shi Yuqi, who enjoyed a one-sided victory over Chinese Taipei’s Wang Tzu Wei.

The fifth seeds found themselves fending off a blitzkrieg from the hard-smashing Rankireddy; before the momentum could completely swing, however, Pedersen asserted herself at the net and picked off a series of points to put the Danes on top. The only solace for the home crowd, apart from Pusarla’s win, was that of Pranaav Jerry Chopra/Sikki Reddy in Mixed Doubles. The Indians held off China’s Han Chengkai/Cao Tong Wei 21-8 21-13 and will next face Christiansen/Pedersen.

In Women’s Doubles, Greysia Polii and Apriyani Rahayu were stretched in the early part of their quarter-final by compatriots Rizki Amelia Pradipta/Della Destiara Haris, but the early slog paid off and Pradipta and Haris were worn down by their attacking compatriots: 21-16 21-9. Polii/Rahayu face Pedersen/Rytter Juhl, while the other semi-final will see young Chinese Du Yue/Li Yinhui against Thailand’s Jongkolphan Kititharakul/Rawinda Prajongjai.

China also have a young pair in the Men’s Doubles semi-finals – Han Chengkai/Zhou Haodong, who face Denmark’s Kim Astrup/Anders Skaarup Rasmussen. The top half will be an all-Indonesian clash between Marcus Fernaldi Gideon/Kevin Sanjaya Sukamuljo and Mohammad Ahsan/Hendra Setiawan.