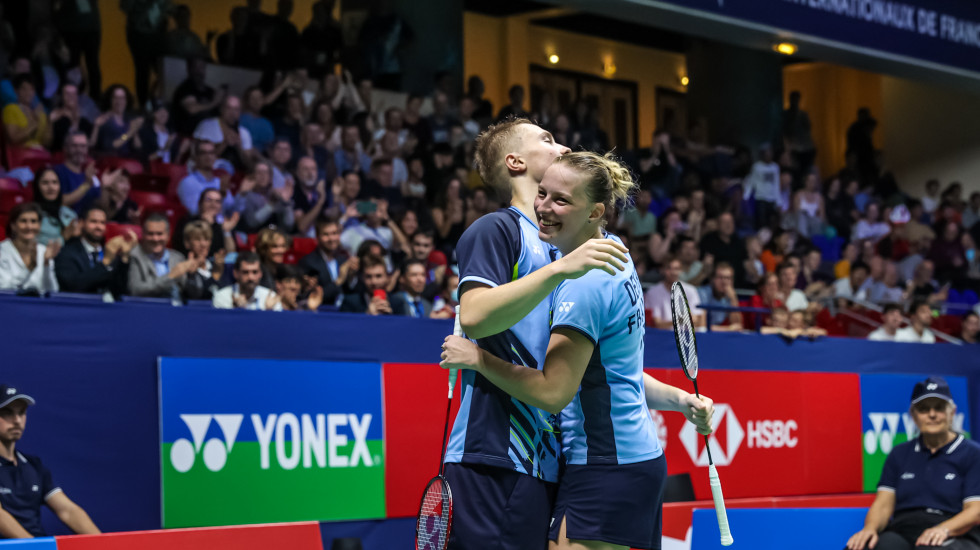 A raucous applause greeted Thom Gicquel/Delphine Delrue after downing Lee Jhe-huei/Hsu Ya Ching in straight games for their maiden first round win at the fourth time of asking on home soil.

The world No.7 mixed pair debuted in 2016 but lost in the qualifying rounds the first two years. In 2019, they didn’t make past their opener. Seeded sixth at YONEX French Open 2022, the 21-12 24-22 win comes on their return to Stade Pierre de Coubertin after three years.

“Wow, that was crazy, a huge crowd, and a lot of noise,” exclaimed an ecstatic Delrue.

“I’m feeling all the emotions right now. A long time since we played here and a first win in the main draw. We are here to fight to win.”

Gicquel added: “Being French and playing a home tournament, it adds more pressure but it’s great to secure a first round win.”

Chants of “Dede” and “Thom” were heard around the arena when they were one game point down, on a knife’s edge with a potential decider in sight.

“In the last few tournaments, we always held a lead of five or six points but couldn’t finish those off. I was struggling with my serve and feeling shaky but I knew my family and friends were in the crowd. I wanted to do this for them, for us. The winning feeling at the end was great,” said Gicquel.

The French Open has not produced a home champion since 2005 when Elodie Eymard/Weny Rahmawati won women’s doubles and Nabil Lasmari combined with Indonesian Eny Widiowati for the mixed doubles crown.

Asked if they could go all the way, Gicquel said: “We take things match by match, but of course we’d love to win the title. Anything is possible.”

“He’s been playing well this year,” said the former world No.1. “But I’ve had an injury and that was a good test to see where I’m at and understand what areas I need to work on.”

The Indian will play Rasmus Gemke in round two after the Dane defeated Nhat Nguyen in straight games.

“He seemed tired and slower than usual so that was my good luck.” – Sitthikom Thammasin on defeating Denmark Open winner Shi Yu Qi

“Every match is a new challenge. We don’t hold on to the past and try not to think too much about the future.” – Huang Dong Ping on ousting world No.1s Dechapol Puavaranukroh/Sapsiree Taerattanachai in the first round for the second week running

“I spent last night watching our defeat to them at Japan Open on my phone so I entered the court knowing what to do.” – Rehan Naufal Kusharjanto‘s pre-match tactic against Goh Soon Huat/Lai Shevon Jemie

“I wasn’t sure if the crowd were watching us or the French mixed doubles on Court 2, but to our surprise, they were cheering for us.” – Yang Po Han after he and Lu Ching Yao collected their first win in four attempts against Marcus Fernaldi Gideon and Kevin Sanjaya Sukamuljo

“No, no, don’t tell me. I just want to take one match at a time.” – Lee Cheuk Yiu when asked if he had looked at his side of the draw after defeating fourth seed Chou Tien Chen in 83 minutes