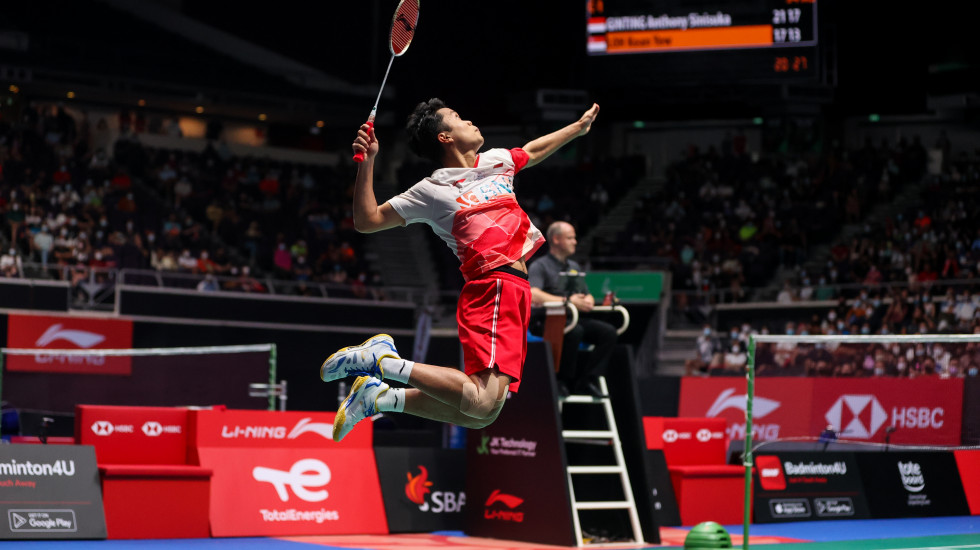 Playing against the world champion and the vociferous Singapore Indoor Stadium, Ginting kept his cool to seal the deal 21-17 21-14 in 37 minutes. In doing so, the world No.6 ended his own long wait to appear in a showpiece bout since winning the 2020 Indonesia Masters.

“Grateful that I’m back in a final. I waited many months for this but I have one more job to complete,” said Ginting matter-of-factly post-match.

On his takedown of Loh, the 25-year-old revealed: “The plan was not to let him dictate the match. We are both fast players so it was a lot about neutralising him, attacking first and staying patient.

“Loh looked a little bothered, maybe by the crowd’s expectations. It’s not easy to deal with that, I know the feeling because I’ve been there myself.”

For Ginting to be champion, he must find a way to subdue surprise finalist Kodai Naraoka, who saw off Zhao Jun Peng 21-18 25-23. The Japanese world No.43 had defeated higher-ranked Jonatan Christie and Prannoy H. S. en route to the final.

“We don’t know each other’s game but I will chat with my coach to get an idea of the type of player he is,” said Ginting. “I cannot take him lightly, looking at the calibre of players he has beaten.

“I watched a bit of his match against Zhao, it’s going to be a tough and exciting battle. Let’s see how it plays out.”

Lai said: “We didn’t capitalise on our points cushion at 14-11 so they took advantage and reached match point first. We got a little nervous at that moment and lost.”

The women’s singles final will be between world No.7 Pusarla V. Sindhu and Asian champion Wang Zhi Yi, who is into her first HSBC BWF World Tour Super 500 title match following a 21-14 21-14 win over Aya Ohori.

Pusarla, on the other hand, has won both her finals this season – the Super 300 Syed Modi International in January and Swiss Open in March – although the Tokyo 2020 Olympic bronze medallist has not progressed further than the last four stage in her six most recent events.

“It’s going to be special because I’m in the final after a long time. One match left and I’m going to give 100 per cent,” promised Pusarla after beating Saena Kawakami 21-15 21-7.