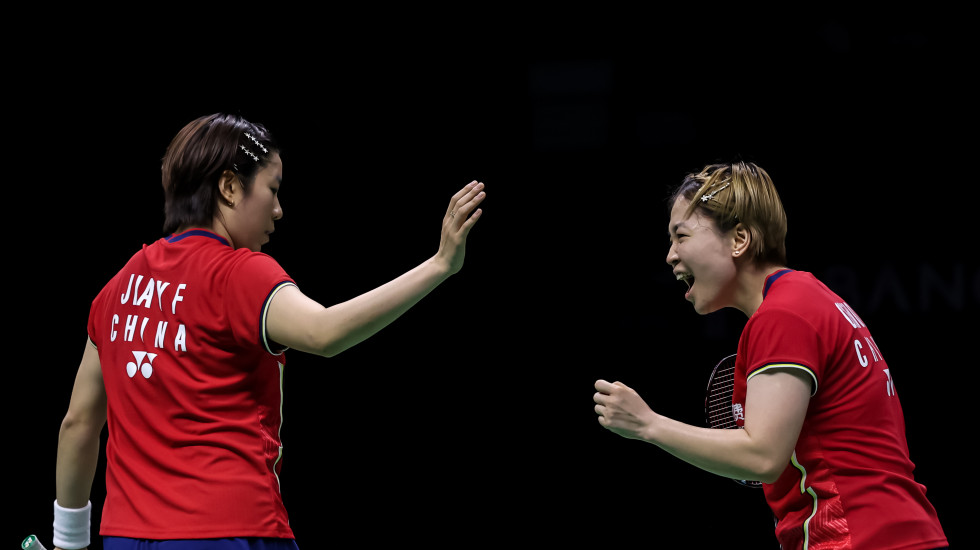 “Before the match we were nervous about meeting the French pair. We got into a tempo and then stuck to our strategy,” said Zheng.

“They have a good serve and once we caught their shuttles, it gave us confidence to continue,” added Huang.

Chen Yu Fei denied Ratchanok Intanon a third title at the Istora as the Olympic champion defeated the Thai 21-16 18-21 21-15 in 74 minutes – the longest match of the day.

On winning their third title of the year, Jia said: “It has given us confidence to move forward. We knew Apriyani had a new partner, and the attack was very fast. Our strategy worked well.”

Fajar Alfian/Muhammad Rian Ardianto stepped up to the big occasion on home soil as they defeated Liang Wei Keng/Wang Chang 21-10 21-17 for their second title this year after victory at the YONEX Swiss Open in March.

“I’m so grateful for this title,” beamed Alfian. “It’s my first time playing at the Istora. This is really special and gives us motivation to get better.”

Asked how they plan to celebrate, the pair revealed: “With our family and friends, but there’s preparation to do for the Indonesia Open.”

World No.1 Axelsen’s fine form continued as he collected his second title on the HSBC BWF World Tour this year, defeating Chou Tien Chen 21-10 21-12. It was his 15th win in 17 meetings with the Chinese Taipei shuttler.

“I didn’t sleep that well last night,” revealed the Dane. “The adrenaline from the Istora wasn’t winding off as I would have liked, so it was a short night of sleep. However, I managed to play a good match.

“Chou is always a tricky opponent, we’ve played each other many times and I’m happy to come out as the winner.”

Asked if he feels unbeatable, Axelsen replied: “I just try to do my best and deal with the cards I’m dealt.”