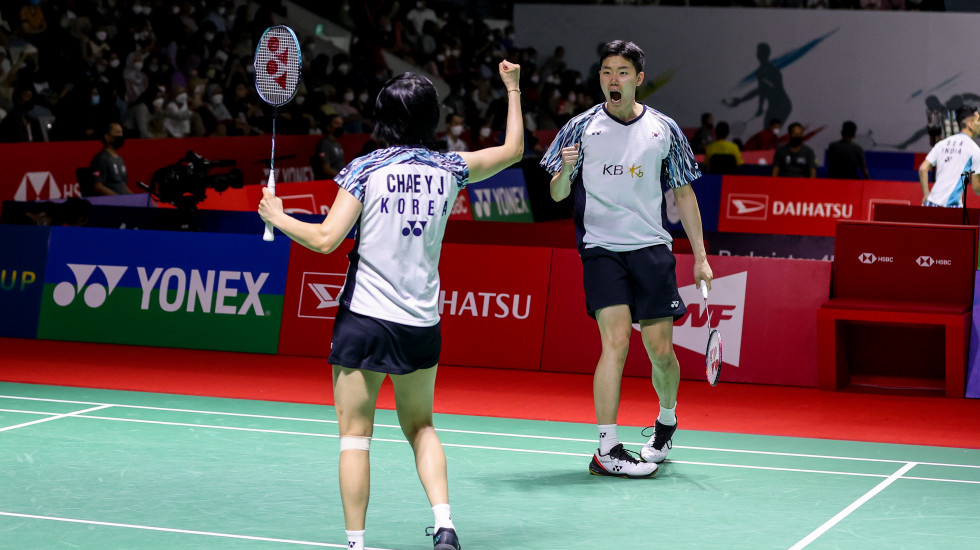 Seo/Chae collected their first wins over the Olympic champions.

Two Olympic champions fell in the quarterfinals of the DAIHATSU Indonesia Masters 2022 today.

For Seo/Chae, it was their first victory in five meetings over Wang/Huang, landing the the Koreans a coveted spot in the semifinals.

“We had a plan going in and although we had a lead in the opening game that got away from us, we came back fighting,” said Chae.

Wang/Huang had seen off Seo/Chae in the last eight of the Tokyo 2020 Olympic Games en route to their gold medal, but that loss was not a motivating factor for the Korean pair.

“I didn’t think too much about what happened last year or our head-to-head. I haven’t been playing for a while. I’ve been recovering from an injury and I’m feeling much better. I feel comfortable on court with Seo and that was a big factor in our win.”

They face another big hurdle when they take on Olympic silver medallists Zheng Si Wei/Huang Ya Qiong.

Local heroes Alfian/Ardianto were also thrilled after their win.

“We’ve avenged our previous loss to them,” said Alfian of their first defeat to the Chinese Taipei pair at the Thomas Cup in October.

“We are excited to play the semifinals in front of our home crowd and looking forward to taking on He and Zhou,” added Ardianto.

Apriyani Rahayu and Siti Fadia Silva Ramadhanti made the semifinals of their first tournament as a new partnership, coming from a game down to outlast No.2 seeds Lee So Hee/Shin Seung Chan 15-21 21-16 21-16 in 73 minutes.

“This new partnership is working out pretty okay,” laughed Rahayu post-match. “The crowd was going crazy cheering for us and that really helped. Greysia (Polii) has been in touch and is giving me tips on how to get better.”

Ramadhanti added: “This is all amazing. It’s my first time in a semifinal. It’s such a wonderful experience and a learning process for us both.”

The Indonesians will contest Pearly Tan/Thinaah Muralitharan for a final spot.