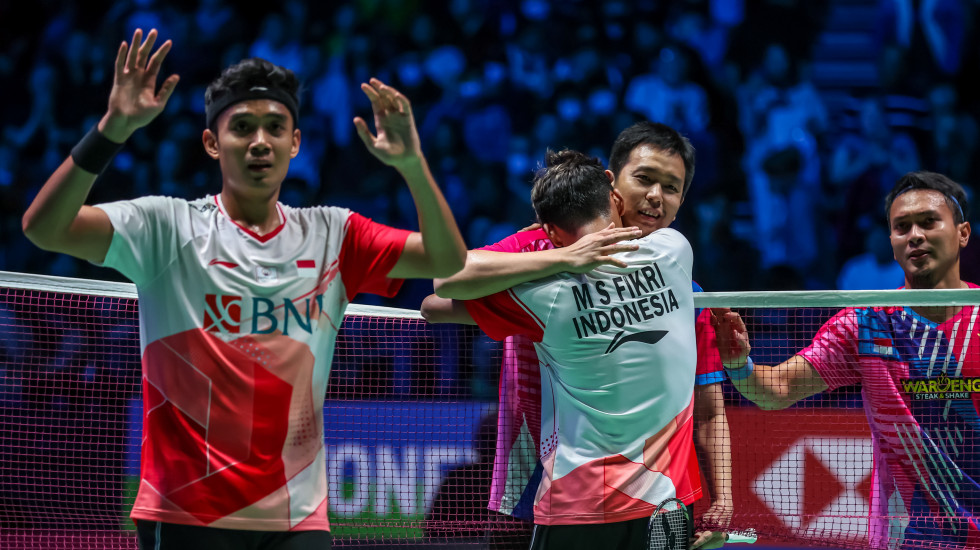 A new pair have burst into reckoning on the world stage. Muhammad Shohibul Fikri and Bagas Maulana’s electric run at the YONEX All England culminated in a dream victory as they outplayed their senior compatriots Mohammad Ahsan/Hendra Setiawan in the final.

All through the week, with the unseeded pair taking down one formidable pair after another, the intensity of their emotions in victory has been evident. Today, after Maulana buried the last kill, Fikri fell to the floor in a flood of tears, and while his partner was more composed, their bear hug at the end showed how much this meant to them. Before this week, they had not even made the final of a World Tour Super 300 event.

“I just went blank,” Fikri said later. “I’ve dreamed of this moment since I was nine.”

Ahsan and Setiawan were grizzled veterans of this stage, and quite creditably stayed in the match despite Ahsan being hampered by injury to both calves. The ‘Daddies’ had the first game in their grasp, but misfires by Setiawan and Ahsan caused the game to slip away; and with the challengers unrelenting in pace, the veterans fell behind.

They were gracious in defeat, with Ahsan refusing to blame his physical condition for the defeat: “I don’t want to talk about my injury. They deserved this win. We congratulated them and we hope they can be consistent.”

As for Fikri and Maulana, who have dreamt of winning the All England since they were nine and ten, there was a dreamlike quality to the whole experience.

“Yesterday we were so nervous, I felt butterflies in my stomach,” said Fikri. “Yesterday we imagined that we would win the title. As soon as we got on court today, I was able to get calm. We tried to remind each other to be brave and consistent until the end.”