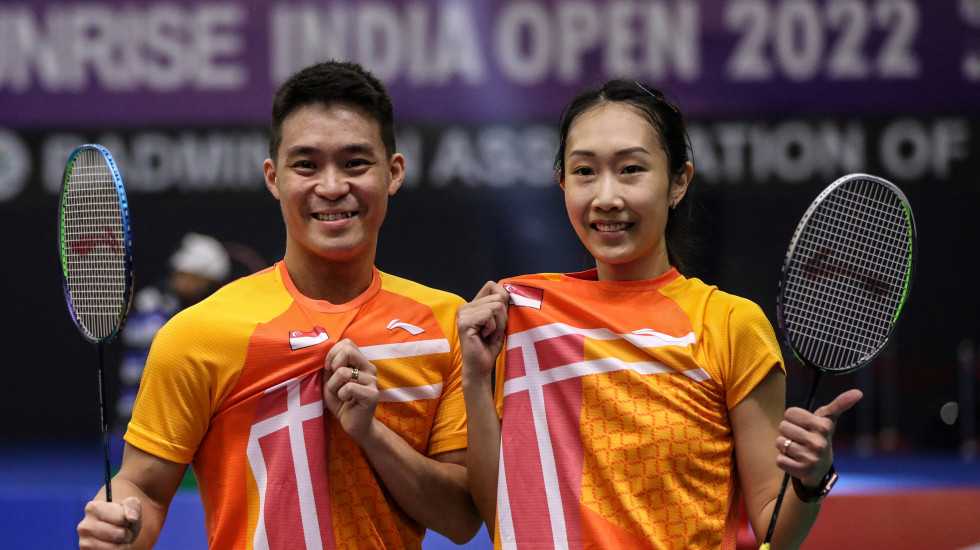 Badminton couples have always been a special feature of the sport – from the days of, for instance, Herbert and Betty Uber in the 1920s, on to recent times which have seen Chris and Gabby Adcock, Liu Cheng and Bao Yixin, and Christinna Pedersen and Kamilla Rytter Juhl, among others.

The first HSBC BWF World Tour event of the year – the YONEX-SUNRISE India Open 2022 – saw the husband-wife team of Hee Yong Kai Terry/Tan Wei Han claim the mixed doubles. It was, they acknowledged, a wedding gift of sorts after they tied the knot last October.

Hee and Tan have had a good run since their wedding. They were semifinalists at the Dutch Open, won the Czech Open, and were again semifinalists the following week, at the Belgian International.

It got better in 2022, despite Tan having a shoulder injury just before leaving for the India Open. They clinched their biggest title, winning the Super 500 event beating Malaysia’s Chen Tang Jie/Peck Yen Wei in straight games.

Both Hee and Tan prefer to foreground their achievements as athletes rather than on their status as an off-court couple.

“The marriage doesn’t really make a difference on court because we both are professional athletes, and we know how to separate work and personal life. We discuss the game professionally and we work hard together,” says Hee.

“Before we got married we were partners,” adds Tan. “We got pretty good results earlier too. I guess the chemistry and understanding has been built over time.”

The Singapore couple were dating for over a decade before they entered wedlock late last year. Having been familiar faces as an effective partnership on the Superseries circuit, they combined with others in the early years of the World Tour before Hee reported for national service in 2019. COVID struck the circuit when they were ready to return.

“What kept us motivated was that we felt we hadn’t reached our maximum potential before I went into national service,” said Hee. “So when I returned, I tried to get back where we left off and we kept working hard. Finally it’s paid off and we’re happy and we hope there’s more to come.

“It was very tough because every day without competition was very dry and mundane. We had to keep motivating each other.”

The title has been a huge morale-booster for them; that it came so soon after their wedding added to its significance.

“It’s a big title for us, because we’ve been out for quite some time and it’s very hard to get back to where we were previously. We were trying hard, and of course with some luck we came into the final, but we played a great game, and we’re happy about it.

“We haven’t had any tournament the last two years. We were just training hard, we were hoping that when the opportunity came we could grab it. We’re happy we could take our chances at this tournament.”

“It takes a lot of discipline and dedication and you always have to strive to be better,” said Tan. “Like during Covid, when there was so much uncertainty, but we still had to do our best every day and train like normal.

“From there to here, it’s a great journey.”