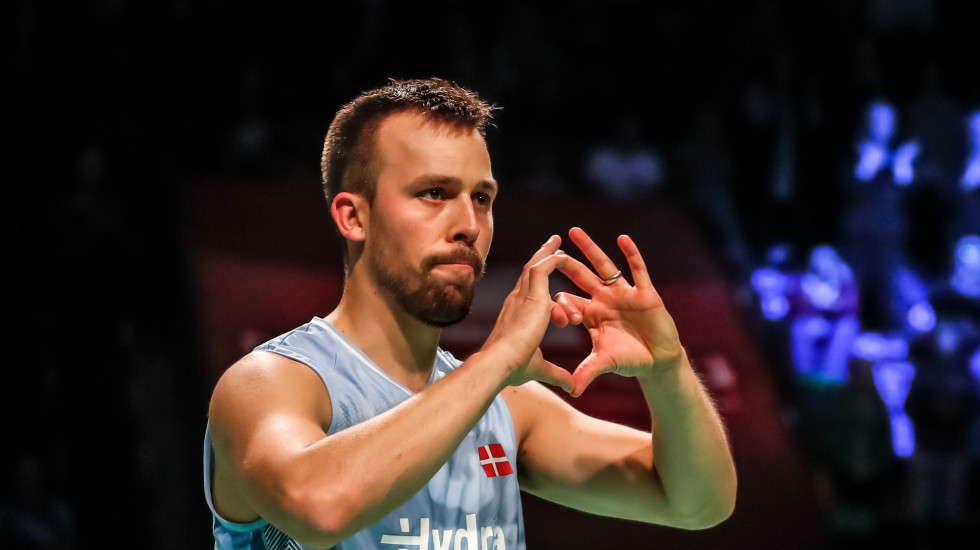 ‘Losing This… Would’ve Followed Us Forever’

Strangely, there was no celebration. Kim Astrup and Anders Skaarup Rasmussen, otherwise known for their unique post-victory war dances, temporarily withdrew into their own worlds after a roller-coaster semifinal at the VICTOR Denmark Open 2021.

It wasn’t just that this was their first Denmark Open final on their ninth try; not just that, a year ago, at this very event, they were at a low point in their career after crashing out to their juniors in the second round.

Rather, it was due to their shock at how close they had come to squandering a dream victory that was in their hands, against Malaysia’s Goh Sze Fei and Nur Izzuddin. As Rasmussen was to say later, a loss “would have followed us forever”.

“I’m used to doing a good celebration but today my thoughts went home to my family,” said Rasmussen, who sat in stunned silence after a line call on match point went their way. “It kind of shocked me in a way and I was very emotional after the match. I still am. There wasn’t dancing or anything, but it was overwhelming in every sense. I’m very grateful. We threw it away in the second game. I don’t know what we would have done if we had lost the match. That would have been… epic, in a way. I’m glad we turned it around because that (loss) would have followed us forever.”

The Danes were flying in the semifinal, against Goh and Izzuddin. Astrup was delivering unreturnable serves and the Danes streaked ahead 13-5 in the second. They were sniffing victory, but a few indecisive moments later, the Malaysians had forced a third game.

The pattern repeated all over again in the third, and when the Danes had finally won the last point, Rasmussen stared blankly into space; Astrup had his head in his hands.

“That moment when you feel like it’s slipping through your fingers, it’s a tough feeling,” said Astrup. “We were so close to standing in the final and you can see it melt away. And there’s literally nothing you can do except try to do better. So I’m very proud of how we handled it and we put everything into it and left it all out there and got a great start in the third game and a little bit of luck in the end.”

Just a year ago, Astrup and Rasmussen had despair written all over them after falling to junior compatriots Rasmus Kjaer and Joel Eipe in the second round. That loss led to a lot of soul-searching, with Astrup revealing that they had even contemplated calling it quits.

“That was a low point. It got us thinking — is it really worth it, is it worth all the trouble? Sometimes you’ve got to go very deep to get really high. But this is an insane high for us. We are insanely happy.

“We feel like we have possibilities to play the very best again, and I’m pleased with that. A lot of injuries and difficult times have made it difficult for us to play our best, but I’m so satisfied with our level this week.”

Astrup and Rasmussen thus made it to their first Super 1000 final since the China Open in 2018, which they won. That victory was followed by several ups and downs. It was at the Swiss Open in March this year that they struck form once again, following up with semifinals at the All England and the European Championships.

“It isn’t always easy being an elite sportsman,” said the emotional Astrup. “It’s easy and difficult at the same time, because there’s so much pressure on you. You put so much pressure on yourself. Today we got a dream come true again. I was not sure we’d get into a Super 1000 final again, but now we have a chance and we are satisfied with that.”