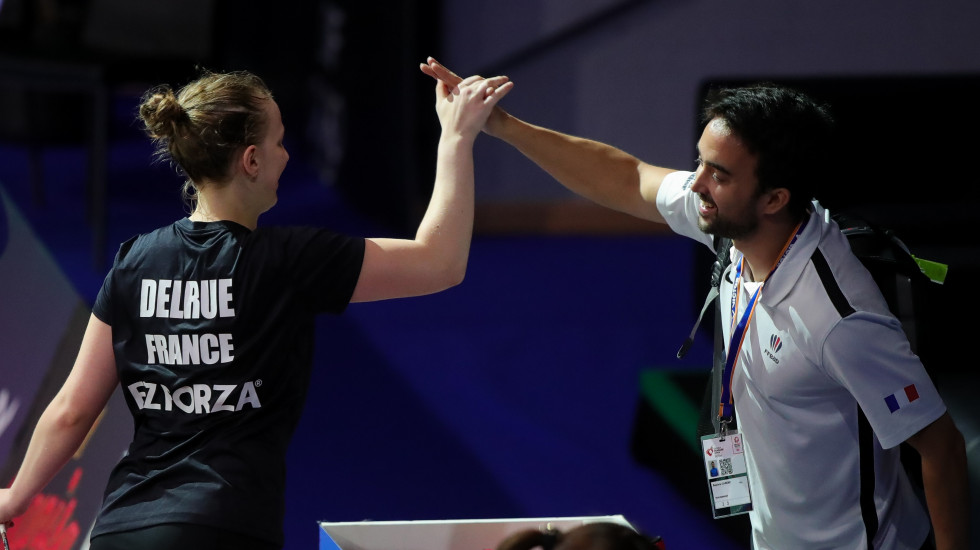 Careme: Thom and Delphine Have Ingredients to be World’s Best

In part 2 of the interview, French doubles coach Baptiste Careme speaks about the rapid rise of Thom Gicquel and Delphine Delrue, currently No.10 in the world, and his belief in their abilities.

Thom Gicquel and Delphine Delrue have stormed to the top 20 in quick time. What makes them such a good pair?

The first thing I think about them is that they have all the ingredients to be the best in the world, that if they are not in the top five in the world, I’m doing a sh** job. They have adaptation skills and they can see the game so well, their reaction times are so crazy, so they’re really talented in a lot of areas.

Are you surprised that they rose so quickly?

I was hoping for that, of course. Surprised? No. They give a lot to the badminton project. Thom, in his head, he wants to be No.1 in the world, so he’s doing everything he can to be No.1. Delphine is the same. And they live badminton, they think badminton all the time.  They’re really really into it, and they’re talented. That’s a good mix, and for me it’s just logical that they can reach the top five. 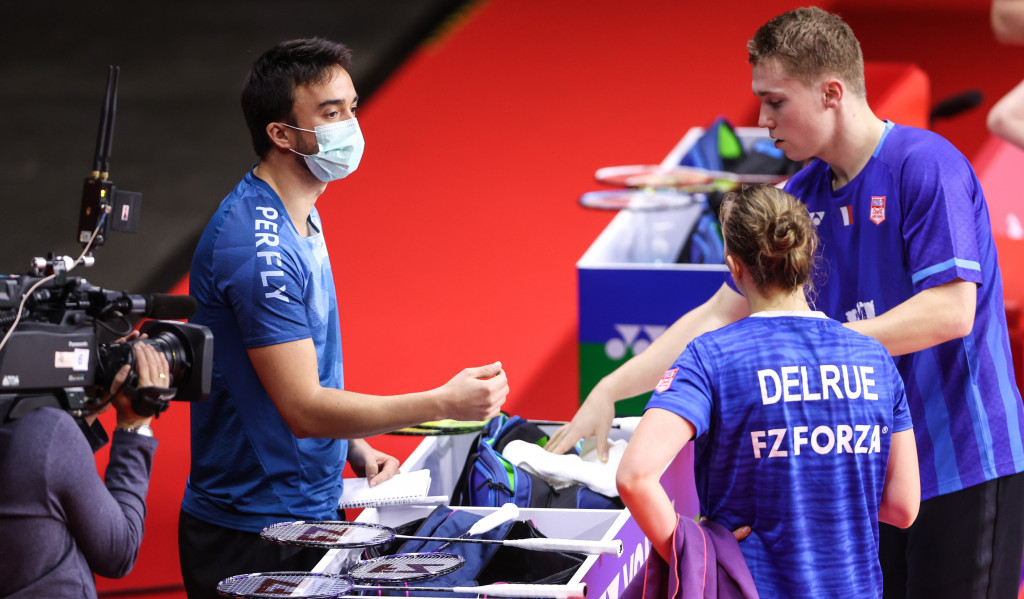 They’re almost there. Quite often, they are beating very good pairs. They know they have the level to do that. Now it’s getting quite obvious. They need this confidence and we need to make them ever better for the Olympics, in order for them to get a medal. We worked a lot with them on the physical areas since the lockdown in March (2020). You can see that on the court. Thom is more powerful, faster on court; Delphine is everywhere now. They’re really confident in their physical abilities now. They have this way of seeing the game, and their technical abilities that can bring them to the top five.

France now have a lot of young players who are performing well at the senior level. How did that come about? 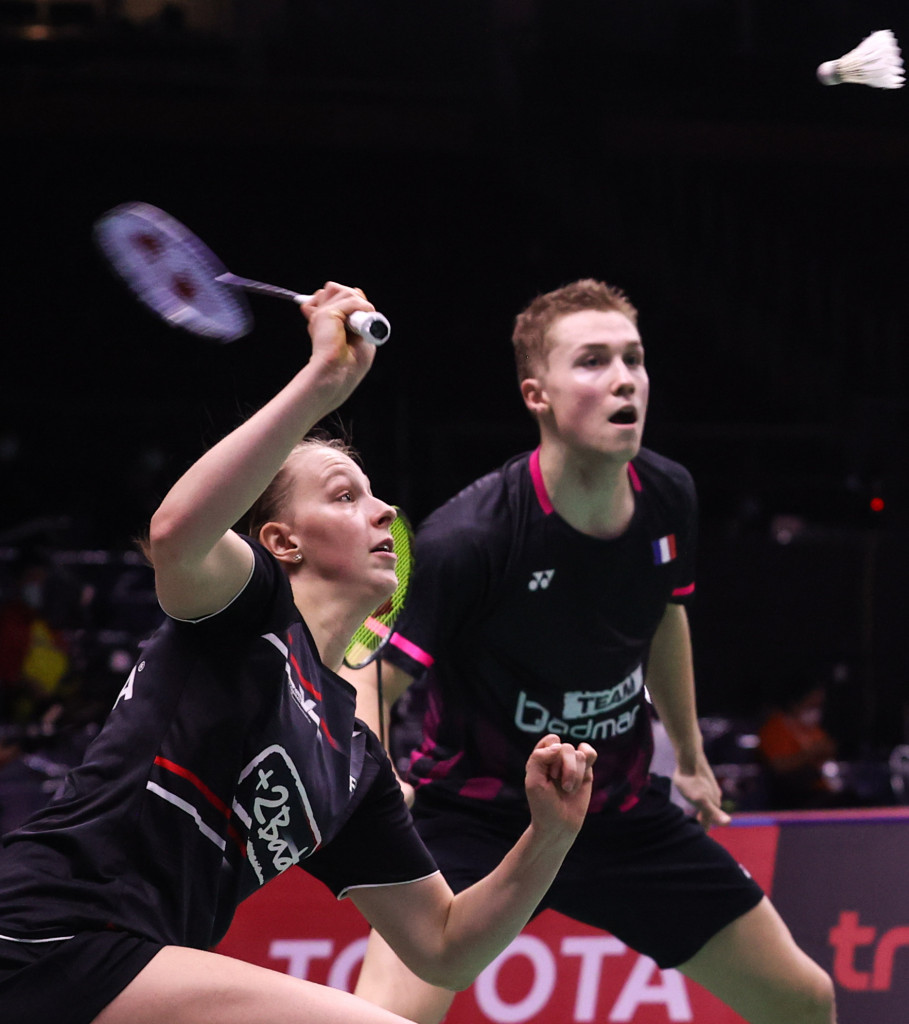 It’s not a surprise now for us to have good senior players because for ten years now, every year we have European champions in the juniors. So France made a big improvement in the young players and now we can see that very good players are joining the senior squad, and most of them have won European tournaments, so they’ve discovered what it is to win tournaments already. The whole group is committed to the badminton life and are training really hard. They know they need each other to improve. And now we have 12 doubles players when I trained in INSEP (France’s national sports institute), and all of them are really competent.

What Thom and Delphine are doing now, is a good example for younger players coming up. They can see that they can do it also, if they follow the same path. Of course everyone has their own path. We have some really talented young players. Maybe for them it will take more time.

The main challenge is that no one in France before has done this. Also, as coaches we need to discover these things, but there’s no magic in this. We just need to work a lot on analysing what’s happening in the top 10, and then you can see it’s not really magical. Just players going quick on court, hitting hard, and I’m pretty sure we can be a bit smarter. Like the Danish play against the Asians, they know they can’t go as fast or hard, so the small areas like the midcourt and front, we need to be better at that game. Thom and Delphine are doing that really well. When they’re playing good, their level in the midcourt and net area is really top five in the world.

What are your immediate goals this year?

Thom and Delphine proved they can beat everyone. The Chinese pairs aren’t here (Asian Leg); but Thom and Delphine played Wang (Yi Lyu) and Huang (Dong Ping) twice and lost twice. I think they’ve improved lot since then and am sure they have the ability to beat these kinds of players. They beat the Indonesians, the Thais, the Japanese, so… everything’s possible. They’re still young, but I don’t think it’s too early to hope for a medal.

For the rest of the team, I’m really confident in their abilities. The most important thing for me is for them to be aware of that and use their abilities to reach the top 20. Of course it’s really complicated, not everyone reaches the top 20 but what I want is that they give everything they have. So they have no regrets later.

We’re really lucky to have this group. And I’m sure the ones joining us in future will have the same psychology.

Is the emergence of new talent a result of a broad-based system?

That’s the kind of thing France has been doing well for the last 10-15 years. Most of the European countries are jealous of that (laughs). They’re trying to see what’s happening in France because they can see it’s working. It’s something we need to go a bit deeper, but this is a good way, I think.

There’s still a lot to do with the seniors. Some things take time but it’s exciting, especially when you work with these players who are committed and talented, and you have the staff behind you working a lot. It can only go well.

Catch Thom Gicquel and Delphine Delrue in action at the YONEX All England starting Wednesday 17 March.