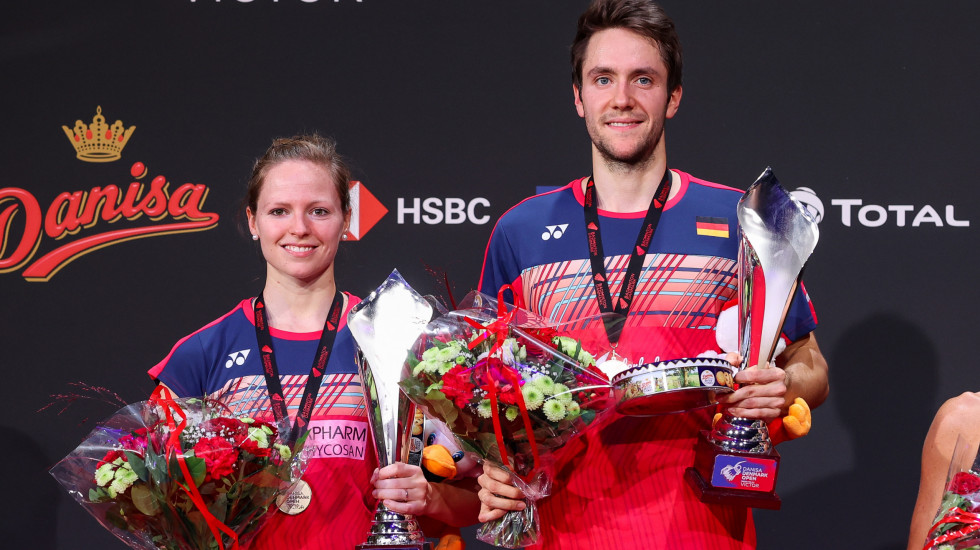 The German duo with their third title together.

Clinching the win, the pair became the first German success story at the competition in mixed doubles after almost half a century. Wolfgang Bochow/Marieluise Wackerow were the last to be champions in 1971.

“It’s extra cool. There were some good European pairs we beat to get this far. We showed we did something right in the summer and it’s just great playing for Germany. I wear the flag on my shirt with pride,” said Herttrich with a big smile post-match.

Lamsfuss added: “I don’t know what to say. It’s just incredible and feels so good. We knew we could win this match but I didn’t expect to win a Super 750. It’s not a normal 750, (but) we beat some good pairs and it’s just great.”

The strategy going into the final was always going to be thorny. Both pairs were quick at the net with attacking shots.

Lamsfuss revealed: “The tactic was to attack as always, we tried to be really aggressive mid-court and play steep shots, waiting for the smash, with Herttrich in front and this worked really well.”

Things were on cruise control as Herrtrich seemed to grow in confidence as they levelled up and pushed the Adcocks to a decider.

“In the beginning, I was a little nervous, a bit shaky. So I tried stepping it up by going to the front from the second game,” said Herttrich.

The Adcocks put a lot of pressure on the Germans, with Chris continuing to display an electric attacking performance at the back court.

“We tried to play as much attack as we can, that’s our strength, and that worked in the first game, but unfortunately we couldn’t quite keep it going for the full three games,” said a disappointed Chris.

Credit where credit is due

The camaraderie between the pairs, who have battled many a time, was apparent as the they shared a chuckle on the podium.

“I didn’t plan a celebration. We’ll drive back home, that seems boring but we’ll have some drinks with the team that helped us get back to playing at this level. The ones who have been with us the whole time,” said Lamfuss.

“But not too big at this time,” intercepted Hertririch, “given the Coronavirus, just a small party.”