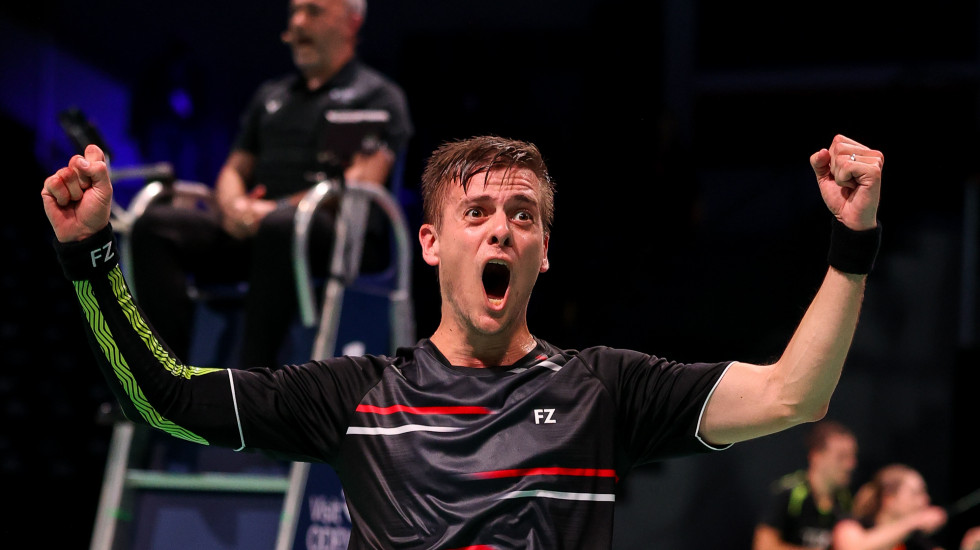 Hans-Kristian Solberg Vittinghus made his first Denmark Open quarterfinal in a long career after a rollercoaster second round at the DANISA Denmark Open 2020 in which he demonstrated great reserves of mental strength.

His opponent Lakshya Sen’s strong show in the opening game gave little hint of what was to follow, for his game unravelled in the second with a succession of errors, allowing Vittinghus to go 18-4 at one point.

Vittinghus was cramping in his right leg but hid his condition well, and Sen aided his cause with a terrible second game in which he totally lost control. The Indian gave up the game too early, and admitted later that after his errors in the beginning, he had decided to play for the third game. It was a tougher contest in the third, with Vittinghus displaying great heart in defending stoutly and taking the opportunities he created.

“I was basically in no condition to play. For the last one and a half months, I’ve trained for one week, and I feel terrible right now, but Lakshya gave away the second game. He should never have done that; had he played full out in the second game I would’ve been carried out. My right leg is gone. I started cramping at 1-0 in the second game and was struggling from then on but I felt Lakshya was not confident on court. To prolong the adventure for one more day is so nice. For the first time in my career I’m in the quarterfinals here. I’ve never performed well here.”

Sen’s compatriot Kidambi Srikanth however made no mistake in shutting out Jason Anthony Ho-Shue 21-15 21-14.

Talking of his next round against Chou Tien Chen, Kidambi said: “He’s been playing well the last few years. It’s definitely a match where I can understand where I’m at. That’s the whole idea of playing this tournament.

“He hits hard, he’s someone who has an overall game, he has a hard smash, he knows when to attack and when to defend. He has matured. It’s always good when you play a top-four player.”

The 24-22 22-20 meant the England duo entered the quarterfinals, the furthest they have gone in a World Tour Super 750 tournament so far.

It was tight all the way. The Germans pulled ahead from 18-20 in the opening game, but Lane and Vendy denied them two game points and took the lead. The pattern replayed in the second game, with the England pair saving a game point and taking the match on their first opportunity.

“They had game points in the first and one in the second, and we managed to wrap it in two, which we’re really happy about,” said Lane.

“They’re ranked above us, we always knew it would be a hard game. Like Sean said, we’ve worked really hard the last couple of months, and that definitely showed today.”

Talking about their preparation, Vendy said the work over recent weeks had showed.

“We’d taken the time to relook at our training, and get better physically, and try to improve. The feeling on court was good. Obviously, many of the top pairs are missing, but it doesn’t take away from the fact that it’s a good feeling. And an achievement in itself. We’ll play tomorrow like it’s the first round.”