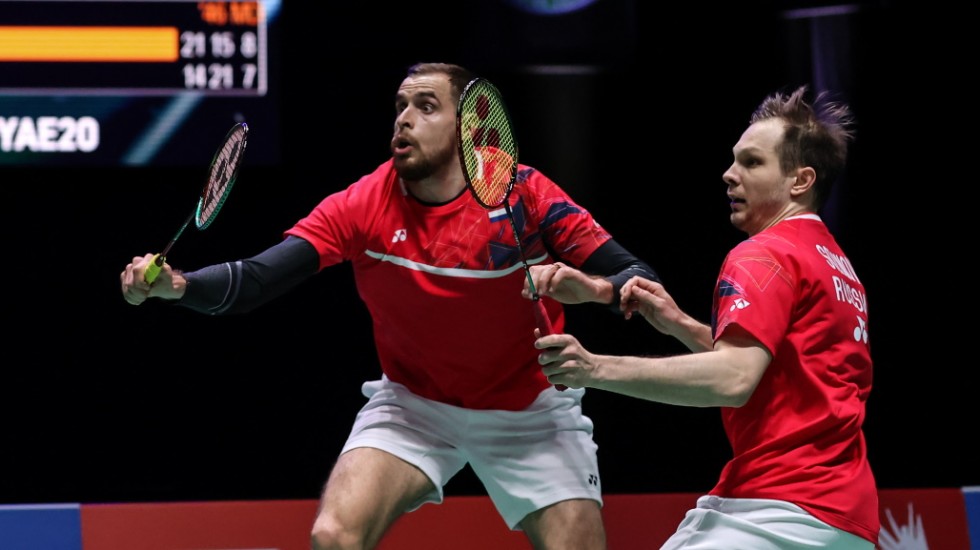 Having reached the quarterfinals of the lone major tournament that they’ve won previously, Vladimir Ivanov and Ivan Sozonov couldn’t avoid the inevitable question. What was the feeling like to find form once again at the scene of their most famous triumph?

The Russians had pulled off a terrific win over familiar rivals Takeshi Kamura and Keigo Sonoda in today’s second round match at the YONEX All England 2020. Their entry into the quarterfinals marked a welcome break from their sequence of modest results over the last two years.

“We didn’t have a good couple of years,” acknowledged Sozonov. “Of course once you play the top level and make the top 10, it’s very difficult mentally to stay there. But now we’ve reached the quarterfinals of the best tournament in the world, and that will give us confidence. And maybe we will find our best game.

Ivanov/Sozonov and Kamura/Sonoda have been involved in some close contests over the last six years; the Russians had won the first three and the Japanese the last two.

It was another crackling match today, with high-intensity attack and defence from both sides, before the Russians shot past at the very end, 21-14 15-21 21-19. It will be their first top-tier quarterfinal after the French Open in 2018.

“Today it was a tough match, we’ve played them six times. Every match has been tough against them. Today we had great defence in the first and third games, and sometimes it was just luck.”

The All England triumph of 2016 is the sparkling gem in their resume, but the Russians weren’t in the mood to dwell on the past. Having achieved their biggest result in a while, they are determined to make it count.

“We’re not thinking about the past. We want to just think about the next match, our minds will be focussed on tomorrow. We’re just so happy to be in the quarterfinals.

“The All England has great atmosphere, it’s a great arena. We love playing here, because we feel the people here like badminton, and we feel the energy and they give us the confidence. It’s a great feeling.”