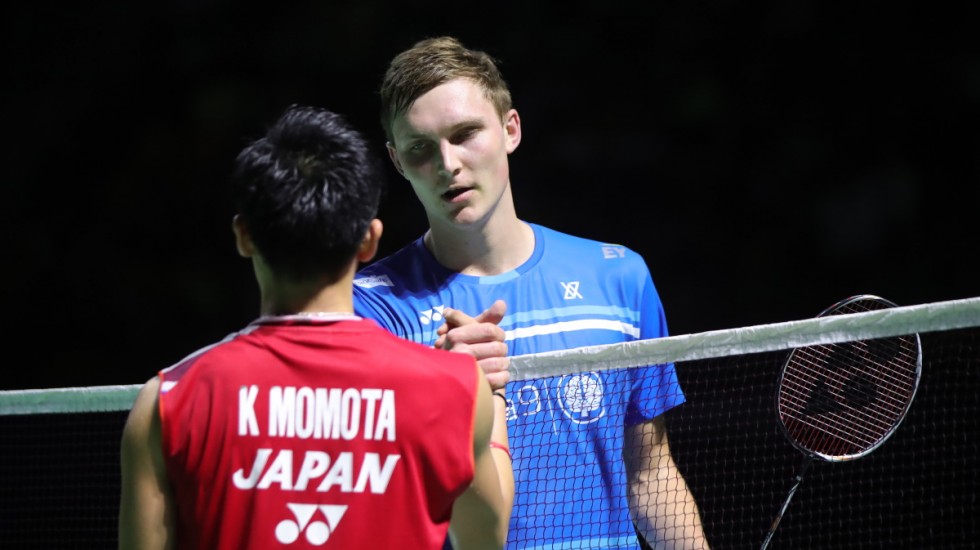 The Wait Continues for Axelsen

A 12th straight defeat to his nemesis, but Viktor Axelsen chose to look at the bright side.

“I’m getting closer and closer,” he said.

He was, and yet the elusive win over his nemesis Kento Momota remained somewhat distant. Momota drew on his exceptional brand of rock-steady badminton to haul past the Dane 21-18 12-21 21-16 in 77 minutes to enter the semifinals of the Fuzhou China Open 2019 today. Their career record now stands at 13-1 for Momota, with Axelsen’s lone victory dating back to February 2014.

There was some similarity with their All England final this year, with Momota racing ahead in the first and Axelsen pulling himself level in the second. Things were poised on a razor edge before Momota’s miserliness in giving openings got the better of Axelsen once again.

This was their first clash since Axelsen’s injury break that saw him sit out the circuit between May and September. He had worked himself quickly back to form, making the semifinals of the last two tournaments in Denmark and France.

After a quick second game win today, Axelsen might have wondered if the freshness of the break would propel him past an opponent who has stubbornly defied him all through his still-young career.

The Dane’s wickedly steep angles had created trouble for Momota; the Japanese responded by converting each rally into a running game. There were few openings for Axelsen to exploit, with the smooth-moving Momota easing the shuttle gently over the net or to the deep corners. It was steady, unadventurous, and a constricting pace, and although Axelsen showed plenty of character to hang in during the rallies and unveil some dazzling play of his own, the sheer unrelenting nature of Momota’s game caused him to slip ever so slightly to give Momota a 9-6 lead in the decider.

Rather against the run of play, Momota returned the favour with a couple of uncharacteristic errors, taking the break at 11-9.

Axelsen had smelt blood and waited to pounce on his opportunity; Momota doubled down on his favoured rhythm of extending the rallies and making no mistakes; when he sensed a chance he exploded into attack. When under pressure, with Axelsen bearing down on him, he had the positional awareness to play the unanticipated shot.

Late in the game came a rally that was classic Momota, he stayed the course for 52 shots until Axelsen let it fall unchallenged. He had come through once again, like he has done in 59 previous matches this year.

“I’m getting closer and closer, like if you look at the All England final, I was pretty close,” said Axelsen. “Now I’m even more close, I think. I just have to find that extra per cent. I have been injured for a long time, so I still have confidence to build in the long run, so we’ll see what happens in the future.

“You have to also give credit to Momota. He’s a really really good player. He’s so hard to beat. He’s shown that for a long time now. You have to aim towards this level and see what you can do to beat him, and hopefully I will be a good contender in the future. It’s just how it is, he’s better than me at the moment, and I have to see what I can do about that.”