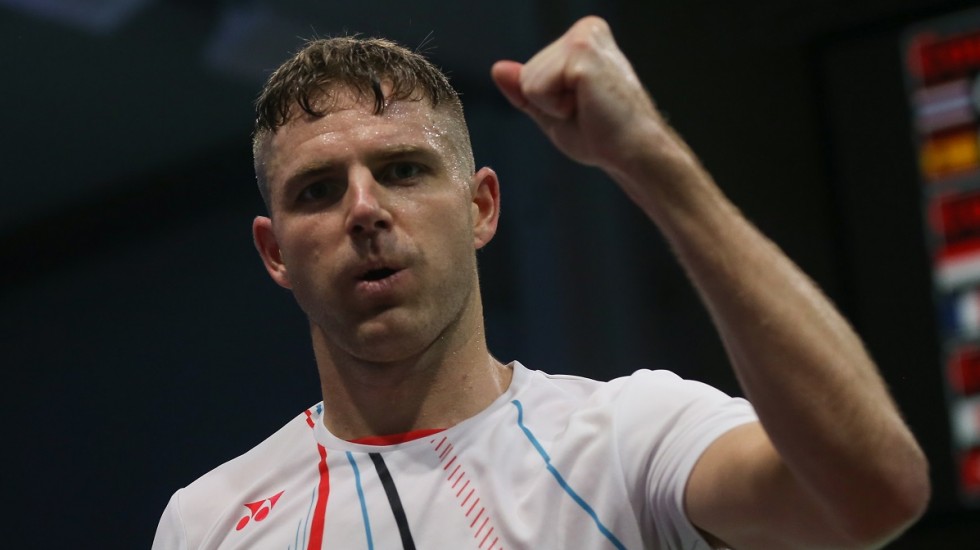 Veteran Brice Leverdez relished feeling fit and free again as the 33-year-old Frenchman rolled back the clock to dispose of eighth seed Anthony Sinisuka Ginting 16-21 21-19 22-20 in round one of the DANISA Denmark Open 2019 in Odense on Tuesday.

Leverdez secured his first victory on the HSBC BWF World Tour in seven months (round one at the India Open in March), revealing it had been a difficult period since injury derailed his campaign post-European Games.

“I was injured since the beginning of July so I didn’t play much and when I played, I wasn’t 100%. I would lose by a big margin and it was not good for my confidence.

“I told myself I had to train hard again. So, in the last three weeks, I’ve been practising very hard.

“Today I am so happy because the work has paid off. It’s like a new beginning for me,” he said.

Those dark months included easy defeats in Indonesia, Japan and China. His season-best silver medal at the European Games in Minsk in June seemed a mile away.

“After the European Games, I had such a hard time for three months. But it’s amazing to come here at the Denmark Open and win against a big player today,” he said.

“It was a bit of a struggle at the end of the third but I’m so happy to get the victory.

“My goal is to now get back to the top 30 by the end of the year. I need to keep playing like this and even better than I did today.

“The start of each tournament is always difficult for me but I’m pretty sure that on Thursday I will be even better than today.”

The world No.2 has battled injury since claiming back-to-back titles at the Indonesia and Japan Opens in July.

It has severely hampered her performance with the 22-year-old recording early defeats at the World Championships, China Open, Korea Open and now Denmark Open.

Alarm bells are surely ringing for the Japan coaching staff, who critically need to get their charger healthy and firing ahead of the HSBC BWF World Tour Finals in December and the all-important climax to the Tokyo Olympic qualifying period in the first quarter of next year.

Cheung, who played her role in the victory with a series of delightful plays at the net, takes on the resurgent Carolina Marin in round two on Thursday.

Marin produced more of the magic that saw her triumph at the China Open in Changzhou in September with an emphatic 21-16 21-19 over the dangerous Pornpawee Chochuwong of Thailand.