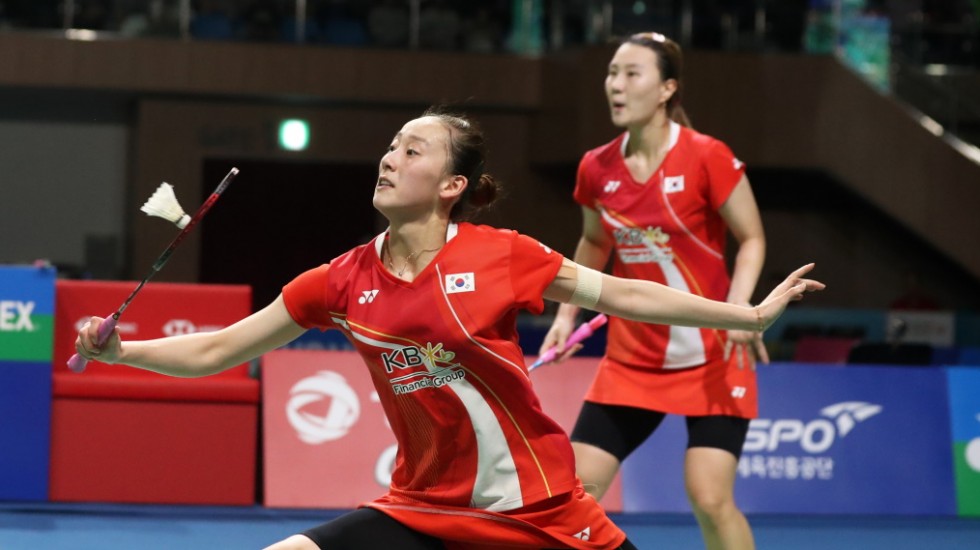 Korea’s women’s doubles pairs showed their prowess on home soil as they ensured an all-Korea face-off in the Korea Open final for the first time in over two decades at the event.

Kim So Yeong/Kong Hee Yong and Lee So Hee/Shin Seung Chan will meet in the title clash of the Korea Open 2019 tomorrow after both outplayed upcoming Japanese pairs.

Both were long affairs, going over 70 minutes, but the conclusions were in contrast. Lee/Shin surged ahead from 17-15 in the third, while Kim/Kong decimated their opponents after Sakuramoto/Takahata had fought their way back in by taking the second game. The decider saw the Koreans pulverising their opponents with their attacking game, allowing the Japanese no leeway for a recovery.

After the recent exploits of their compatriots Gideon/Sukamuljo and Ahsan/Setiawan, it was the turn of Indonesia’s Fajar Alfian and Muhammad Rian Ardianto to make their presence felt. The Swiss Open champions, who have had an uneven season, edged third seeds Li Jun Hui/Liu Yu Chen 27-25 22-20.

The men’s singles final will pit two players who between them have won all top-tier events from the Singapore Open onwards – Kento Momota and Chou Tien Chen.

Momota played well within himself in his semifinal against India’s Parupalli Kashyap, only sporadically turning on the pace as he chalked up a 21-13 21-15 victory. Chou overcame early trouble against compatriot Wang Tzu Wei but came through comfortably in the end, 12-21 21-13 21-11.

Highlights | He Bing Jiao displays a convincing win earning her spot in the women's singles final. Can she go all the way? 🏸#HSBCBWFbadminton #HSBCRaceToGuangzhou pic.twitter.com/WnDlSz2Ewi

The women’s singles final will pit Ratchanok Intanon against He Bing Jiao – both seeking their first Korea Open title. Intanon was always on top against a listless Tai Tzu Ying, while He Bing Jiao needed just 31 minutes to outplay Canada’s Michelle Li, 21-9 21-15.

Getting into their year’s seventh final were Zheng Si Wei/Huang Ya Qiong, who won the quickest match of the day at 29 minutes, against home pair Seo Seung Jae/Chae Yujung, 21-11 21-16.

Having won all their other six finals this year, the odds will be against their opponents in the final, Dechapol Puavaranukroh/Sapsiree Taerattanachai, although the Thais are one of the few pairs to have beaten the Chinese.

Puavarnukroh/Taerattanachai blew four game points in the first against upcoming Indonesians Rinov Rivaldy/Pitha Haningtyas Mentari but didn’t let that affect them as they drew level in the second.

“My preparation wasn’t good. My movements were very poor. My right ankle was a bit sore… it’s been a lot of tournaments, so I’m looking forward to going home and rest. I’m not happy with my performance today but the results this week were good.” – Michelle Li.