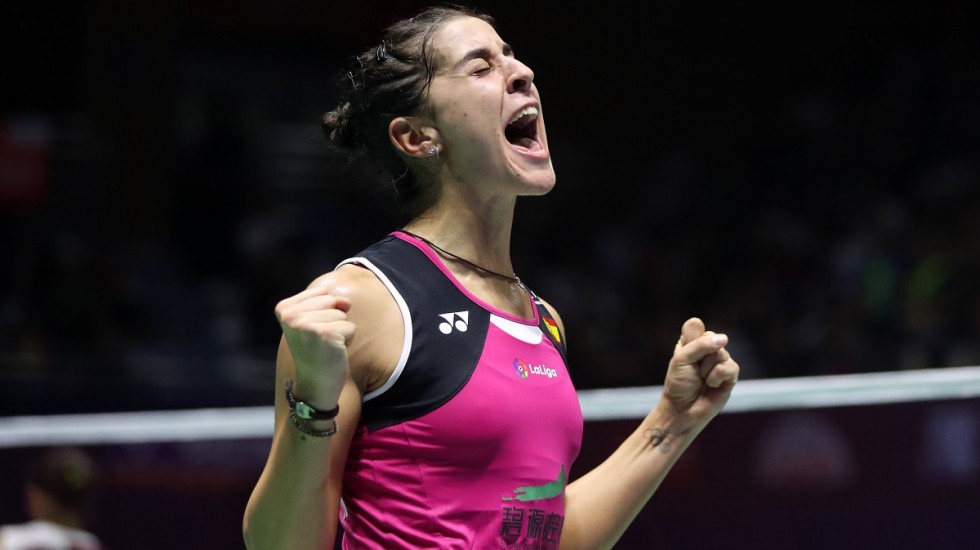 Her peers think Marin has come back even stronger.

Should We Have Ever Doubted?

It’s like she had never left. Spain’s Carolina Marin is once again the toast of badminton.

Not just for her stunning win at the VICTOR China Open 2019 in Changzhou on Sunday – almost eight months after injuring her anterior cruciate ligament (ACL) in her right knee at the DAIHATSU Indonesia Masters in January.

But for her incredible feat of returning to the winner’s circle just two weeks into her comeback. The Rio 2016 Olympic champion broke down in tears immediately after sealing the 14-21 21-17 21-18 victory over Chinese Taipei’s Tai Tzu Ying in the final of the HSBC BWF World Tour Super 1000 event.

“It’s unbelievable. I couldn’t imagine during my rehabilitation that I could win in my second tournament back.

“But I did and I feel so happy with myself.”

It was only two weeks ago on 10 September that she played a nervous and tentative opening round match at the Vietnam Open as she eased her way back into competitive play. There was no pride lost in the defeat.

After her first-round victory in China, Marin said: “In Vietnam, of course, I felt some nervousness to win my first game. That made me feel the tension in my body and I couldn’t think about what I had to do with my opponent.

“I just want to forget about my injury. I missed a lot of tournaments and playing at a high level with good players. My physical condition is really good, my knee is really good, and I don’t have any pain. I feel more confident about that.

“I just have to keep focused on my mental game. Because when you play a top player it is tough to be focused through the full game.”

Forget her injury she did.

In Sunday’s final she surprised the entire badminton world, not least herself, by defending her China Open crown and securing her first title exactly a year to the day she last tasted success on the World Tour.

Most had thought it would take some months until we saw the best of Marin again. But it’s clear the 26-year-old has come back stronger, fitter and more skillful as ever. Even her vanquished opponent Tai noticed the Spaniard had improved.

“I feel she is more skillful now. I noticed she maintained her speed in every match. She is also much better at the net and has more variety of shots,” said Tai.

It’s a warning sign to the rest of the world’s top 10. How much better can she get with more time on court? Only time will tell.

Marin pulled out of the Korea Open this week but is entered to play in tournaments in the Netherlands, Denmark, France, Germany, Hong Kong and India to close out the season.

Having first doubted whether she would ever make it back in time to earn enough points to qualify for the Tokyo 2020 Olympic Games, Marin knows she now has the confidence both physically and mentally to defend her Olympic title come August next year in Tokyo.

Her steely attitude that we have seen these past eight months stems from her reaction that very first day she received the bad news.

“When I heard that I’d broken my ACL, I was really sad. I was crying. Then I told myself ‘It’s ok. These things happen. Now I need to think positively. I need to be patient’. This is how I am thinking now.”

Should we be surprised? No, not really. We’ve been seeing this resilience and fortitude on court ever since she graced the scene earlier this decade.