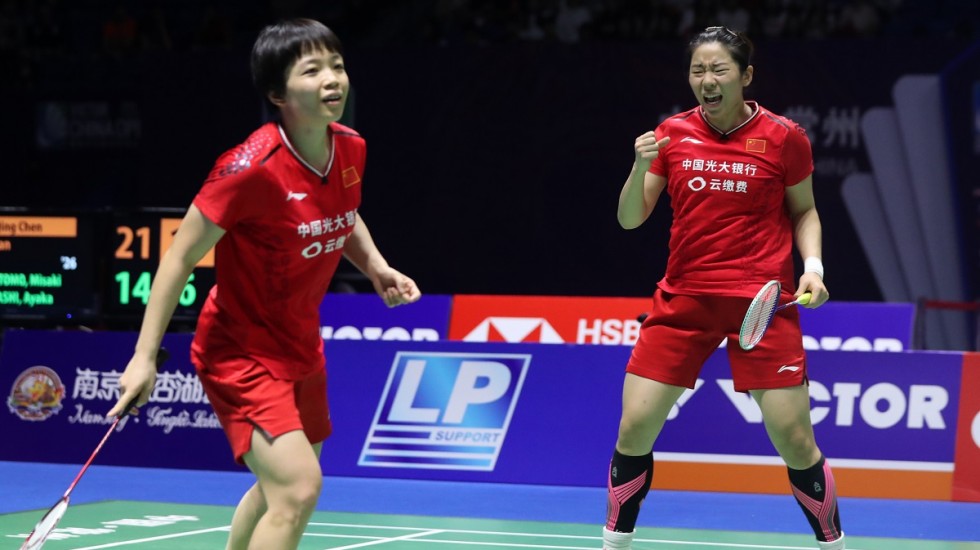 Another Super 1000 title for Chen and Jia.

For the second time this year at the Super 1000 level, China’s Chen Qing Chen and Jia Yi Fan have broken the dominance of Japan’s big three women’s doubles combinations.

On this occasion, they accounted for Rio 2016 Olympic champions Misaki Matsutomo and Ayaka Takahashi 21-14 21-18 in the final of the VICTOR China Open 2019.

While often in the shadow of the top three ranked pairs in the world – Mayu Matsumoto/Wakana Nagahara, Yuki Fukushima/Sayaka Hirota and Matsutomo and Takahashi – Chen and Jia have again shown they are a force to be reckoned with on the big stage.

In March, they knocked off both Matsumoto/Nagahara and Fukushima/Hirota en route to winning the All England Open title and this time it was the turn of the Olympic gold medallists to feel their wrath. They also did the same at the Asia Championships 2019 in Wuhan, defeating Matsumoto and Nagahara again.

Today, Chen and Jia ran through the first game 21-14. It was relatively tight at 14-12 only for the home team to take seven of the next nine points to jump ahead 1-0.

With their army of home support in full voice, they then closed out the contest 21-18 in comfortable fashion. Although thrilled with the result, Chen and Jia were quick to point out their opponents were not at their best.

“We were extremely lucky today. Luck was really on our side. Our opponents didn’t perform well today. They made many simple mistakes and gave us free points. So, it wasn’t just a case of us playing well, it was also our opponents underperforming,” said Jia.

“But our coach challenged us to play at our best and to display great fighting spirit. And we did that. He said it doesn’t matter whether we win or lose, what was important was to fight.”

A humble Matsutomo and Takahashi said they were all too aware of what led to their defeat.

“They were playing at home and had a strong desire to win. They also had many shots that clipped the net in their favour. Overall though we were lacking in many areas that our opponents performed well in,” said Takahashi.

Matsutomo added “I committed too many unforced errors. I need to work harder.”

Chen and Jia now lead the head-to-head against the Olympic champions 6-4. Interestingly, they also hold a winning record against Matsumoto/Nagahara (4-2) and are 6-7 with Fukushima and Hirota.

With Chen and Jia not pressurised by the tense three-way rivalry to qualify for Tokyo 2020 that faces the Japanese pairs, the Chinese should enjoy an element of freedom in their play as they build towards the HSBC BWF World Tour Finals and the end of Tokyo 2020 qualification.