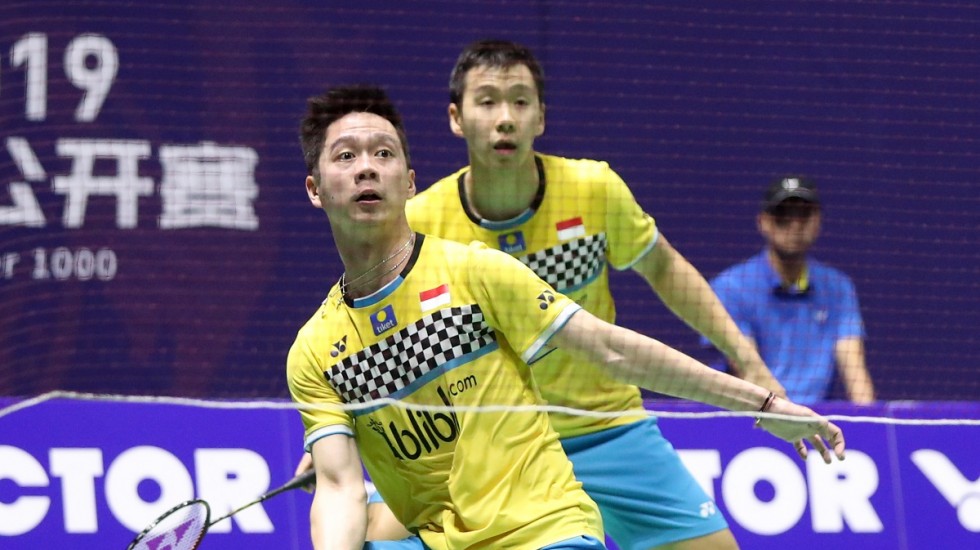 The 'Minions' get it right this time against Choi and Seo.

Come the latter stages of the third and decisive game during their second-round encounter against Choi Solgyu and Seo Seung Jae of Korea earlier today, Marcus Fernaldi Gideon and Kevin Sanjaya Sukamuljo – better known as the ‘Minions’ – must have thought ‘oh no, not again’.

In every aspect bar the final result, today’s clash at the VICTOR China Open 2019 in Changzhou was a mirror of their heated tussle at the World Championships in Basel last month.

On that occasion, Choi and Seo showed character to bounce back from a first-game loss and a 17-19 deficit in the decider to prevail over the tournament favourites 16-21 21-14 23-21 in 64 minutes.

It condemned the ‘Minions’ to yet another early exit at the World Championships.

Today could have played out very much the same way; and at the same stage of the tournament.

Gideon and Sukamuljo took the first 22-20, dropped the second 18-21 and despite leading at 15-12 in the third, managed to lose their way and concede six of the next seven points to trail 18-16.

In Basel, the Indonesians pointed to the gamesmanship of the Koreans in reference to their tactics on the key points. “They delayed their serves and that affected our rhythm,” Gideon said on that occasion.

The same tactics seemed to be in play again today. The mistakes crept in as the pressure mounted.

But luck was ultimately on their side as the world No.1’s rode the right side of a key Hawkeye call late in the piece to draw level at 21-21. They then eked out the last two points for a morale-boosting 23-21 win in the last.

Post-match Gideon and Sukamuljo discussed the similarities to the clash in Basel and expressed their relief at getting through this time.

“We were lucky today. The score was the same as in Basel, 23-21 in the last. At the end of the match we had many lucky points,” said Gideon.

“Our opponents played really well, they are very good in attack so we were always under pressure from them,” added Sukamuljo.