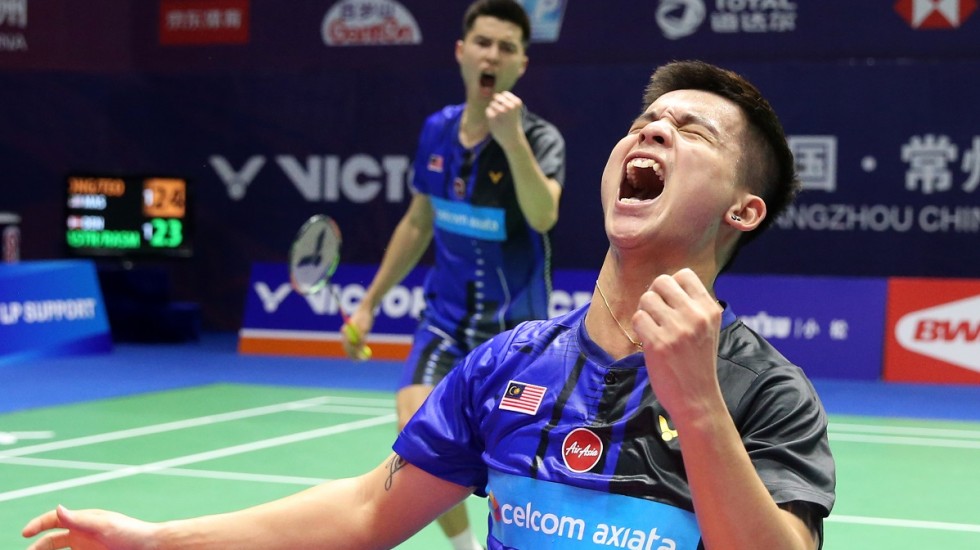 The feeling when you knock out the defending champions.

It was a fantastic day for Malaysia’s men’s and mixed doubles combinations at the VICTOR China Open 2019.

Playing side-by-side at the same time, both against Danish opposition, Olympic silver medallists Goh V Shem/Tan Wee Kiong and Ong Yew Sin/Teo Ee Yi pulled off nailbiting victories that both went to deuce in the third.

Goh said afterward: “The crowd was so crazy we couldn’t focus at the end with the other match.

“They know us well. We were lucky at the end that we were more on our game than our opponents. We are happy we managed to win and not give up,” added Tan.

There are concerns for Teo, however, who injured his left leg during play and will undergo a doctor’s inspection overnight.

It was another tight tussle in what is shaping as a close rivalry between the two pairs.

“Before 11 points, we were playing with the wind and that required a specific strategy. After we changed ends, we had to change our game plan, but both of us coordinated our play very well,” said Goh.

Poise, Power and Passion for Pornpawee

Another Thai, Pornpawee Chochuwong, secured one of the biggest wins of her career defeating recently-crowned world champion Pusarla V. Sindhu of India 12-21 21-13 21-19 to reach her first quarterfinal at a Super 1000 level.

A peak performance had been on the cards for Chochuwong for some time following an impressive run at the Thailand Open in late July where she reached the semifinals, as well as her opening round victory yesterday against the in-form Michelle Li of Canada.

Chochuwong said of her victory: “I’m really happy to get into a quarterfinal of a Super 1000.

“Last month she won the World Championships but today I just gave my all and fought for every shot that we played. Today is a very good day for me.

“The draft was different at each end, a bit side to side. I played on the same court last night and that helped me today, so I just tried to control my shots,” she said.

Chochuwong takes on local hope Chen Yu Fei for a place in the final four.

Highlights | Gloves are off for Carolina Marin, is she a contender for the title? 🏸#HSBCBWFbadminton #HSBCRaceToGuangzhou pic.twitter.com/Do3iWrHc4S