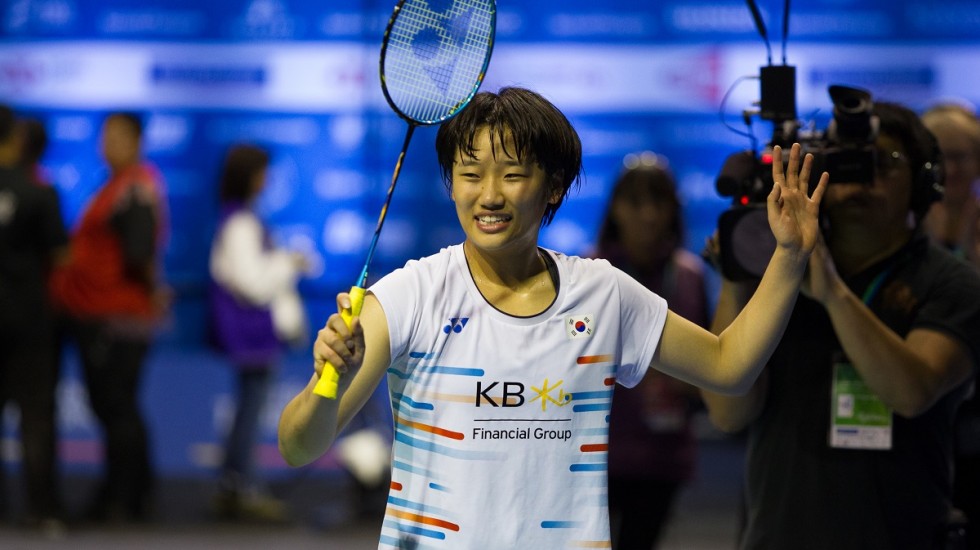 Korea unearth new starlet in An.

Korea’s 17-year-old phenom An Se Young showed no sign of nerves as she secured the biggest victory of her career defeating London 2012 Olympic champion Li Xuerui 21-19 21-15 in the women’s singles final at the BARFOOT & THOMPSON New Zealand Open 2019.

Showing great speed and court craft, An responded to everything her more experienced opponent could throw at her, taking an enthralling first game 21-19.

The two went point for point through the opening half of the second game before An made the crucial, and in the end match-winning break, to ease out to a 15-10 lead. From there she was never headed to seal it 21-15.

“I have been doing extra training by myself, but I didn’t expect to win so early,” said An.

“I am working hard and am already playing against the top players with more experience.

“I will continue to prepare the best I can and my aim is to go to the World Championships and the Olympics.”

Having never defeated a Japanese combination before this week, the Koreans followed up their marathon semifinal win over Yuki Fukushima/Sayaka Hirota with another gutsy display.

Kim credited their chemistry and tenacity for the win.

“Before we never thought we could, but yesterday we did and now we know we can do it. That was the difference mentally,” she said.

“Because my partner is quite young and can get emotional, I calmed her down and had faith in her power to win the points.”

Mohammad Ahsan and Hendra Setiawan continued their resurgence in 2019, claiming their second title of the season following their famous victory at the All England Open in March.

At 20-22 21-15 21-17, the match could have gone either way with Japan’s Hiroyuki Endo and Yuta Watanabe proving formidable opponents. The fixture produced some of the best exchanges of the week, with both sides showcasing superb defence.

“It is important to get a good start Tokyo 2020 Olympics qualifying,” said Ahsan.

“Our opponents were very strong and provide a different challenge. We had to be patient all the time with our attack.”

How best to describe this great rally? We are speechless 🏸🔥

Chan said of the performance: “Even when we were behind, we never gave up and kept on going. Jordan is a powerful player. He is very strong. So, we tried to not let him dictate too much.”

Ng was in his first HSBC BWF Tour Final and may well have emptied the tank in his shock win over Dan yesterday. Christie was delighted with his victory and has high hopes for the rest of the season.

“I am very excited with this being my first time as a champion on the HSBC BWF World Tour at the Super 300 level. I now hope to be champion at the Super 500, Super 750 and maybe Super 1000 level.”

Great drop shot from Christie as he sees off threat from Ng 🏸 #HSBCBWFbadminton #HSBCRaceToGuangzhou pic.twitter.com/qcg5ATvaaq