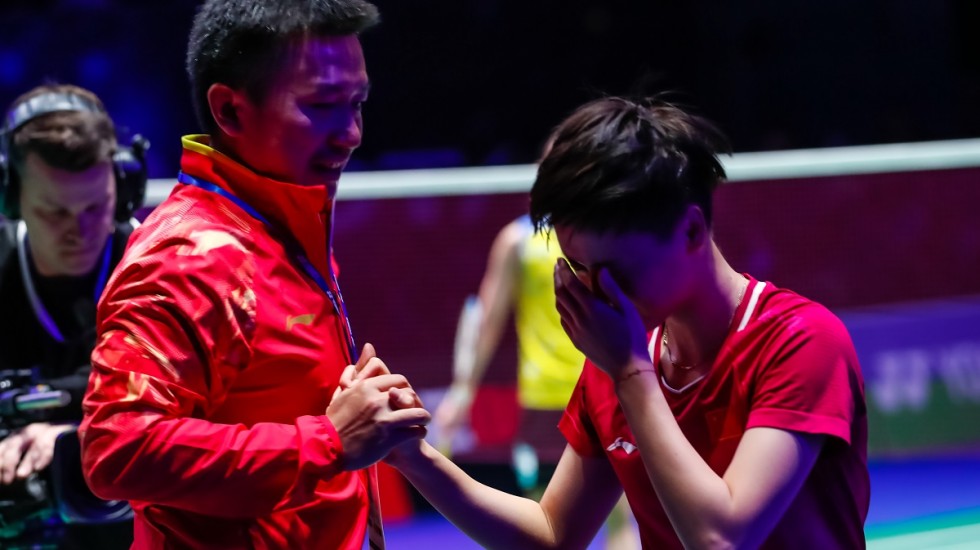 Tears of joy for the champion.

If you fail, try and try again they say.

That was the case for China’s Chen Yufei who overcome an 11-0 head-to-head record against World No. 1 Tai Tzu Ying of Chinese Taipei to capture her first All England crown and first Super 1000 victory on the HSBC BWF World Tour.

It gave China a winning double to start Sunday’s proceedings after Chen Qingchen/Jia Yifan came from one game down against Japan’s Mayu Matsumoto/Wakana Nagahara to win their first World Tour title in over a year.

The emotion on Chen’s face post-victory said it all. Three of their last outings had all gone the distance – an indication she had been getting closer and closer – but Tai Tzu Ying was able to get better of the 21-year-old on each occasion.

This time though, Chen was not going to allow her opponent to claw her way back into the contest. A spate of uncharacteristic errors from an impatient two-time defending champion handed Chen a 17-9 lead in the first game.

Tai struggled with her depth control, knocking a number of back-court exchanges long. As she was forced to push the limits, she then began to hit wide.

Naturally, the top seed found her range, winning eight of the next 10 points to close to 19-17. But Chen showed experience beyond her years to slow the match down and regain control to close out the game 21-17.

It was much of the same story in the second game as Chen jumped out to an early lead and held that advantage to record a memorable win at the YONEX All England Open Badminton Championships 2019.

“It is a great honour and a huge success in my career,” Chen said.

“I didn’t expect to win in straight games. When I expressed my joy, I totally lost it and that’s why I fell on the ground to celebrate.

“I think I’m more mature now mentally and physically compared to last year and that’s probably the reason why I won.”

She became the first All England women’s singles winner from China since Wang Shixian in 2014, and in doing so, denied Tai Tzu Yin her own slice of history in becoming just the seventh person to win three All England Open titles in a row.