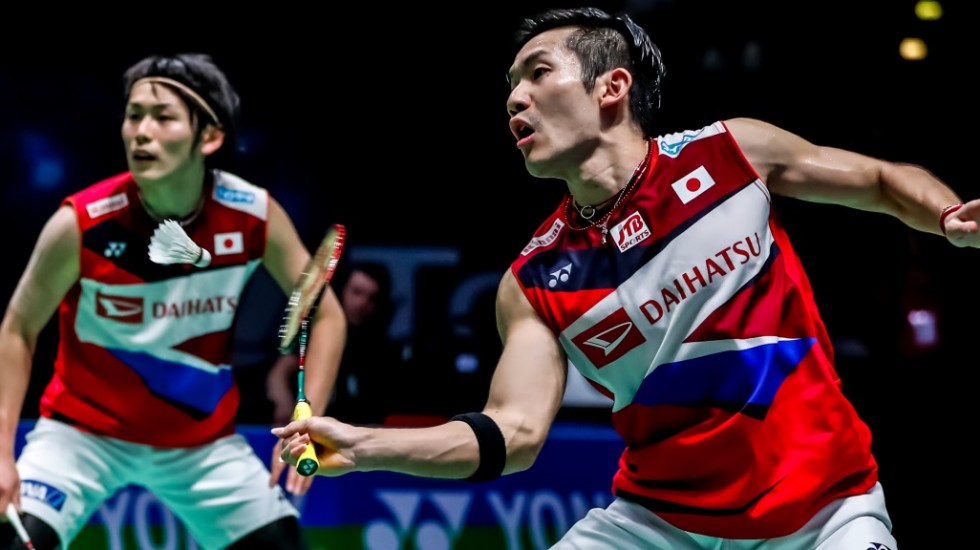 Mathias Boe and Carsten Mogensen’s 15-year fruitful partnership came to an end today as the Danes crashed out of the second round of the YONEX All England Open Badminton Championships 2019. It was the second blow to Danish hopes in men’s doubles after fifth seeds Kim Astrup/Anders Skaarup Rasmussen fell to Malaysia’s Aaron Chia/Soh Wooi Yik.

The closest match of the session was between young Chinese Han Chengkai/Zhou Haodong and Chinese Taipei’s Liao Min Chun/Su Ching Heng. Liao and Su fought off a match point in the second to take the match to a third game. The Chinese survived a late charge at the end to emerge winners at 21-14 20-22 21-19.

There was plenty of attention on the Boe/Mogensen versus Takeshi Kamura/Keigo Sonoda second round match, for it pitted the two-time All England champions against the World Championships runners-up. The Danes had announced earlier that this was their last tournament together, and that added to the sense of anticipation.

However, Kamura/Sonoda stayed sharp all through the 40-minute encounter, defending astutely and pressuring the Danes with their energetic presence at the net. Mogensen did not have one of his better days, and the former champions were shut out 21-14 21-16.

“It has been 15 great years, and we’ve won a lot of times. I had a crazy accident in Russia and we fought back and won titles and became No.1 again; we’re the most winning pair in Danish history, so that’s something to be proud of,” said Mogensen.

“Of course it’s not nice that we lost today, but that’s how it is,” said Boe. “We won a lot and it’s time to be proud of what we’ve achieved. We’ve a lot of respect from our opponents around the world and that’s something to be proud of.”

Boe/Mogensen had beaten Kamura/Sonoda the last time they met, and had a 4-2 record going into the All England.

“We’ve beaten them twice before, but beating them here gives us greater confidence because this is the All England and we are now in the quarterfinals. Hopefully we can keep going and beat the other top pairs,” said Aaron Chia, after the Malaysians beat Astrup and Rasmussen.