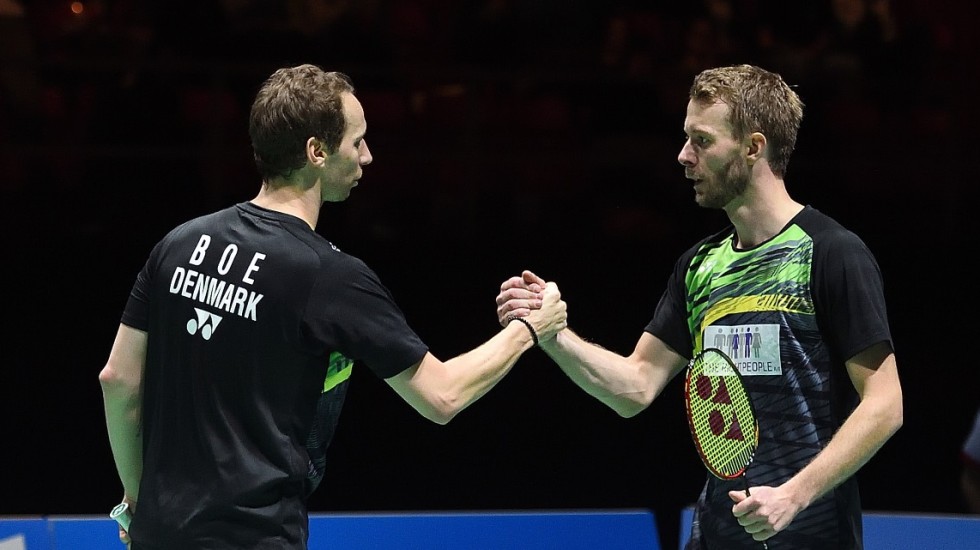 Boe (left) and Mogensen were among the most successful pairs in Danish history.

It wasn’t the kind of end they would’ve wanted to their partnership, but Mathias Boe and Carsten Mogensen preferred to dwell on the positives of their eventful 15-year partnership.

The Danes, having fallen in the second round of the Yonex All England yesterday in straight games to Takeshi Kamura/Keigo Sonoda (21-14 21-16), will start a new phase in their career with different partners.

“We haven’t been on a good strike the last six-seven months,” said Boe. “We’ve been struggling and

had a lot of good conversations about what to do. Both of us feel we have more to give to the sport and to achieve and aim for the big victories. But sometimes you have to make a decision to see what you want to do and we talked about it and decided that we don’t have that much to lose in splitting up and continuing our career with new partners to try a new challenge.”

It was significant that they decided to go their separate ways after the All England – an event they have excelled at. Having won twice in four finals, the All England, Boe said, was their favourite tournament. Their favourite memory, they said, was in bouncing back from defeat in the 2010 final to their compatriots to claim the title the following year.

“We enjoy playing here and we reached four finals and many semifinals and won it twice so of course it’s the best tournament on earth. One of the worst nightmares was the final in 2010 when we lost to our practice partners Lars (Paaske) and Jonas (Rasmussen) in the final. Ove the year we bounced back and won the title. We were trailing 15-11 in the third set and by a miracle we won it (over Koo Kien Keat/Tan Boon Heong). That first All England title was special,” said Boe.

The Danes have been among the most successful pairs in contemporary badminton. The highlights of their career would include silver medals at the Olympics (2012), the World Championships (2013), and multiple victories in major events all around the world – most notably a hat-trick of titles at the BWF Superseries Finals between 2010 and 2012. What made their recent achievements even more creditable was that after Mogensen recovered from a brain aneurysm in 2016, the Danes went on to capture titles in France, Singapore and Korea.

“We have had 15 amazing years. We struggled a lot but we also won a lot of titles. I have been injured and after that crazy accident in Russia we fought back and won titles again. We’ve been the most winning Danish pair in history, that’s something to be proud of,” said Mogensen.

Boe will start a new partnership with Mads Conrad-Petersen, while Mogensen will team up with Mads Pieler Kolding. It’s a new phase both experienced stars are looking forward to.

“Maybe we can put a bit more petrol on the fire and get a bit more motivated in practice and have something new to aim for. Great players can win with different partners and that’s what we’re both going to try,” said Boe.