A vintage performance by a Men’s Singles veteran; a first Tour semi-final for a fledgling Mixed Doubles pair and a sweet redemption in Women’s Doubles highlighted this afternoon’s quarter-finals at the Singapore Badminton Open 2018.

While the next generation of badminton stars have been making the most of their opportunity to shine in the Lion City, some seasoned campaigners are still in the mix and enjoying some unexpected success.

In Men’s Singles, Nguyen Tien Minh rolled back the years with an energetic display that was way too good for Ihsan Maulana Mustofa. The Indonesian was undone by a combination of slick racket skills, sharp attacks and deft touches around the net. It resulted in a 21-15 21-15 triumph that catapulted his Vietnamese opponent into the men’s solo semi-finals at Singapore Indoor Stadium tomorrow. Nguyen, 35, will battle Hsu Jen Hao of Chinese Taipei for a spot in the final. The latter outlasted China’s Huang Yuxiang (21-15 6-21 21-16).

“I’m happy. I played very well. I haven’t played in Singapore for a long time but, whenever I do, I play quite well,” said an ecstatic Nguyen, who had no special tactics today.

While thrilled to reach the semi-finals of the Super 500 event, the former top player was quite relaxed about the prospects of progressing further – all 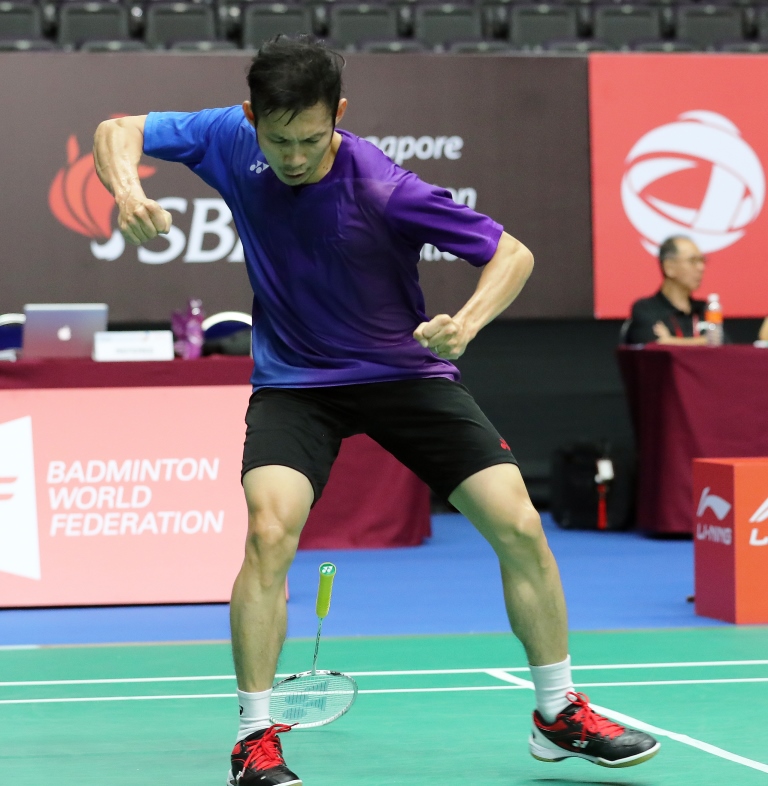 in keeping with his perspective on life these day.

“Tomorrow. I don’t know. I beat Jen Hao already but now I am older. I’m 35 so I can’t train that hard. I’m just enjoying my life and still playing badminton because I love it. I feel very fit in this tournament and I hope I can win it.”

There was also satisfying success for Germany’s Isabel Herttrich and Carla Nelte (featured image) who regrouped after blowing a 17-12 lead in the home stretch, to win in straight games. A day after their squad lost all its other second-round fixtures, the Women’s Doubles duo put smiles back on their team-mates’ faces, defeating Ng Tsz Yau/Yuen Sin Ying of Hong Kong, 21-15 23-21.

“After yesterday, this feels very good. We’re happy to be in the semi-finals at this level. We knew we could beat them but it got close in the second game after we were leading 17-12, but our coach kept us calm and we won. We’ll try to keep going,” said a beaming Herttrich.

Fate has decreed the Men’s Doubles title will go to either China or Indonesia. Two same-country semi-finals were confirmed as experienced partners, Mohammad Ahsan/Hendra Setiawan, overcame their young Thai rivals, Tinn Isriyanet/Kittisak Namdash, 21-19 21-19. That win guaranteed Indonesia a foot in Sunday’s showpiece as Angga Pratama/Rian Agung Saputro had advanced to the semi-finals earlier by walkover. 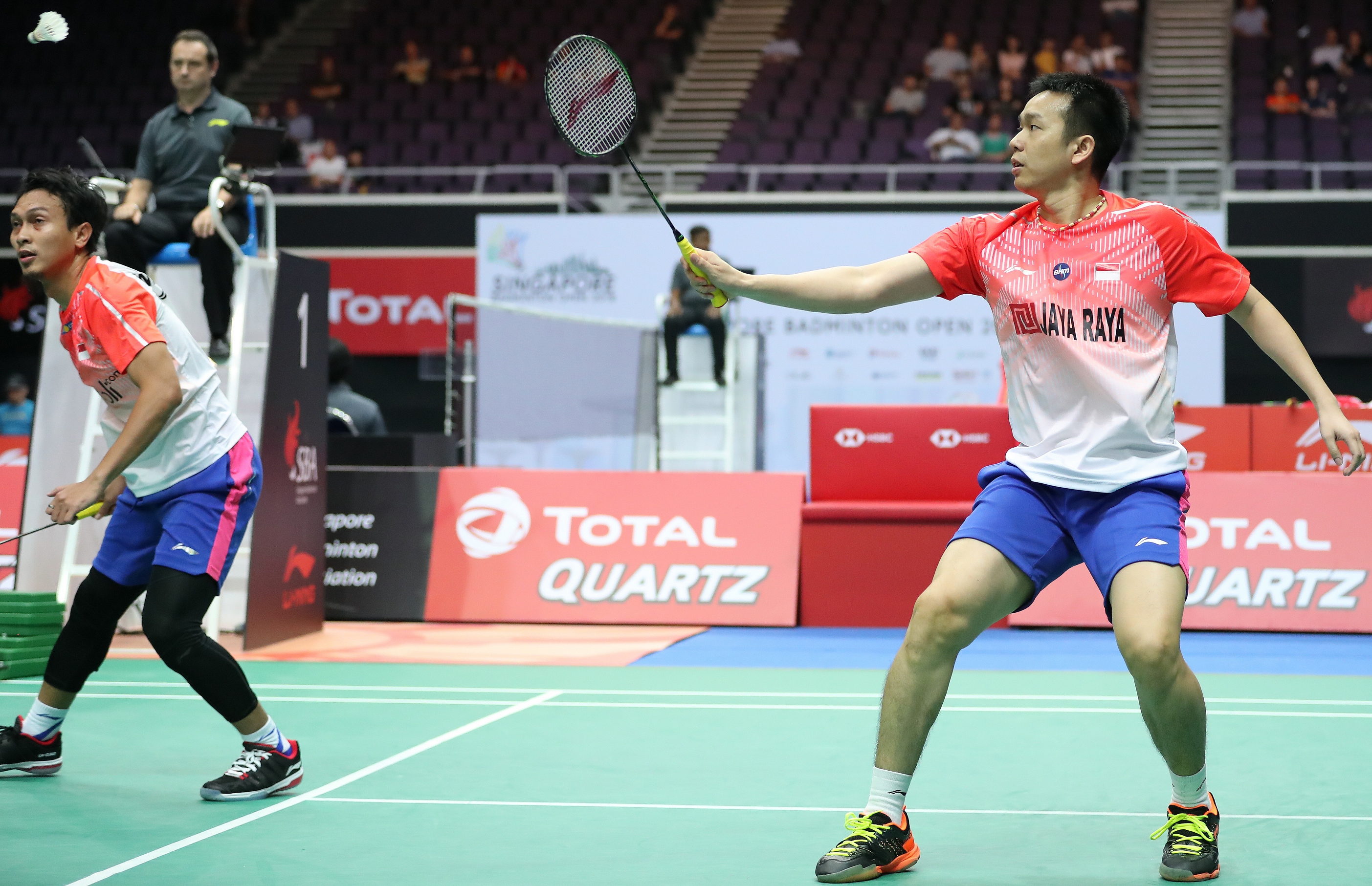 Two promising Chinese pairs – Ou Xuanyi/Ren Xiangyu and Han Chengkai/Zhou Haodong – will duel for the other place in Sunday’s finale.

“Our world ranking is higher than theirs so I think we would be more confident of winning,” assessed Han of the upcoming semi-final.

“However, since we’re very familiar with each other’s playing styles, tomorrow’s match will definitely be fierce so the result could be unpredictable. Whoever wins or loses will depend on how well we can adapt to the court conditions.”

“We’re very proud to be in the semi-finals. This is just our second tournament together. We were nervous but we fought hard because we don’t know when we will have the chance to reach a semi-finals again,” said Cahyono.

Meanwhile, Dechapol Puavaranukroh and Sapsiree Taerattanachai are eyeing their second successive final in Singapore, having been runners-up last year. Having gone the distance again today, the Thai tandem must get past Goh Soon Huat/Shevon Jemie Lai of Malaysia in order to play on Sunday.

In Women’s Singles, Nitchaon Jindapol of Thailand and Gao Fangjie (China) are set to reprise their Uber Cup showdown while the other semi-final pits young Chinese, Han Yue, versus Sayaka Takahashi of Japan.

Though other fancied contenders have fallen, second-seeded Jindapol has navigated the windy on-court conditions to reach the semi-finals. Today she overcame a stuttering start versus Chen Su Yu to advance, 25-23 21-16; saving three game points in the opener. Noting that she won because she played with “a lot of heart”, the 27-year-old vowed to “bring my best” against Gao – who won an all-China battle against Cai Yanyan – for a crack at the final.

Han, last year’s World Junior silver medallist, will be confident for her semi-final, having stormed past Indonesia’s Yulia Yosephin Susanto in the decider. From a 7-14 deficit, Han won 14 straight points to snatch an incredible triumph.

“It’s hard to reach the quarter-finals and further of big events so I wanted to give my all. I’m the underdog against higher-ranked and more skilful players. I’m just trying to challenge them,” said the young Chinese.

Takahashi, meanwhile, reached the semi-finals thanks to a 12-21 21-13 21-12 comeback against her team-mate, Minatsu Mitani, and will be seeking her third title this season.