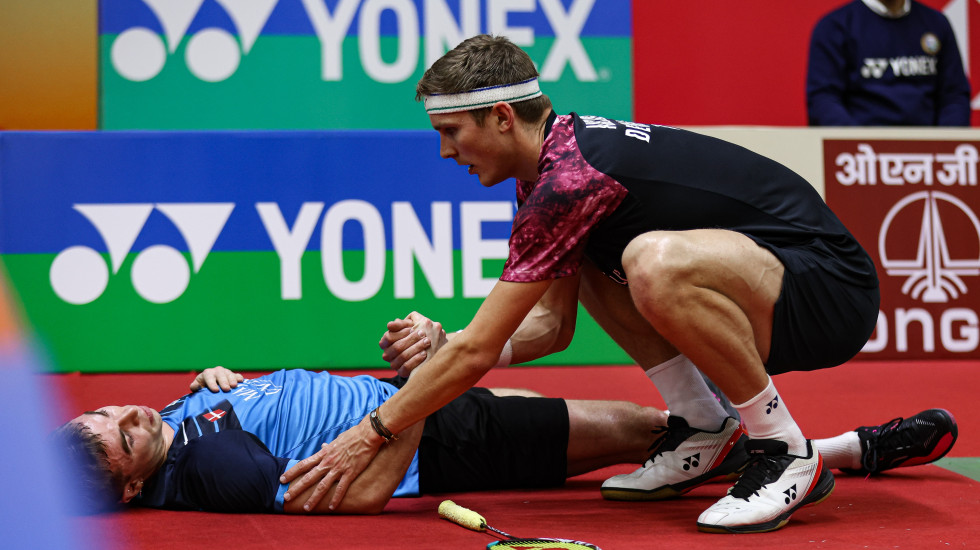 Rasmus Gemke was wheeled out of the YONEX SUNRISE India Open 2023 after appearing to hurt himself badly in his quarterfinal against Viktor Axelsen and will fly to Denmark for further assessment.

The injury was initially feared to be an Achilles rupture, but Denmark head coach Kenneth Jonassen said initial checks hinted at the likelihood of something less serious.

Axelsen was leading 15-8 when Gemke took a tumble and crashed into the side boards. Axelsen rushed to check on him, and appeared upset as he came off court.

“Gemke is a friend of mine, so it was tough to see him go out like that,” said Axelsen. “Not at all what I’d hoped for today. So at this point I’m a little bit shocked. I wish him a speedy recovery. For myself, I just need a few hours to digest it and then I know I will be ready for another match tomorrow.”

There was a walkover in women’s singles, with Olympic champion Chen Yu Fei reporting unwell for her quarterfinal against Supanida Katethong.

He Bing Jiao in Semis

The last time they played, at the Tokyo Olympics, both Beiwen Zhang and He Bing Jiao finished the match in tears. Zhang had been wheeled off with a serious knee injury; watching her opponent in pain, her opponent couldn’t hold her tears either.

Today it was a more straightforward affair, with the Chinese world No.5 making the semifinals after coming from behind in both games, 21-13 21-19.

Zhang needed no reminding of their last meeting.

“I feel like injury is scary for all players. At the Olympics I was totally fit and I wasn’t under pressure. This match was different. My training hasn’t been stable, but I’m happy that even if my timing was not right, I could handle the game, but I made a lot of mistakes.”