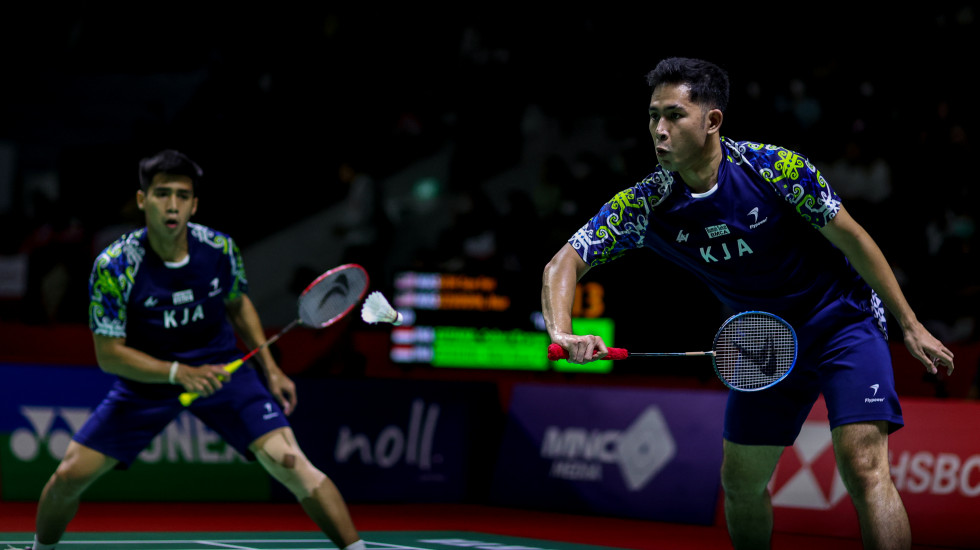 Singapore Open: ‘Nothing to Lose’ for Gutama/Isfahani

Perhaps the least known outside their country among Indonesia’s four men’s doubles semifinalists, Sabar Karyaman Gutama and Moh Reza Pahlevi Isfahani are unfazed by the challenge awaiting them at Singapore Open 2022 today.

To get through to their maiden HSBC BWF World Tour Super 500 final, the youngsters must outwit the country’s most in-form tandem – Fajar Alfian and Muhammad Rian Ardianto, who have three titles and three runners-up finishes this season.

“This is an unbelievable achievement,” said 26-year-old Gutama of making their first Super 500 semifinal. “We have nothing to lose as they are the pair ranked higher. We will just enjoy the game, give our best and who knows, we might just get another surprise result.

“We left the national team in January but we have been able to maintain a decent level since. We hope not to stop here, we want to strive for bigger things.”

The world No.72s made the last four after shocking Lu Ching Yao/Yang Po Han, who are ranked 48 places above them 21-16 21-17. Of Indonesia’s four men’s doubles semifinalists, only Gutama and Isfahani got the job done in straight games.

The duo have been together since 2020 and their best result is a second place finish at the Spain Masters last year.

Isfahani, 23, said: “Everything has been going great for us, I didn’t expect to do this well to be frank. The support from Indonesians in Singapore has been good too. But like Sabar said, we hope this will be the beginning of a better phase for us.”