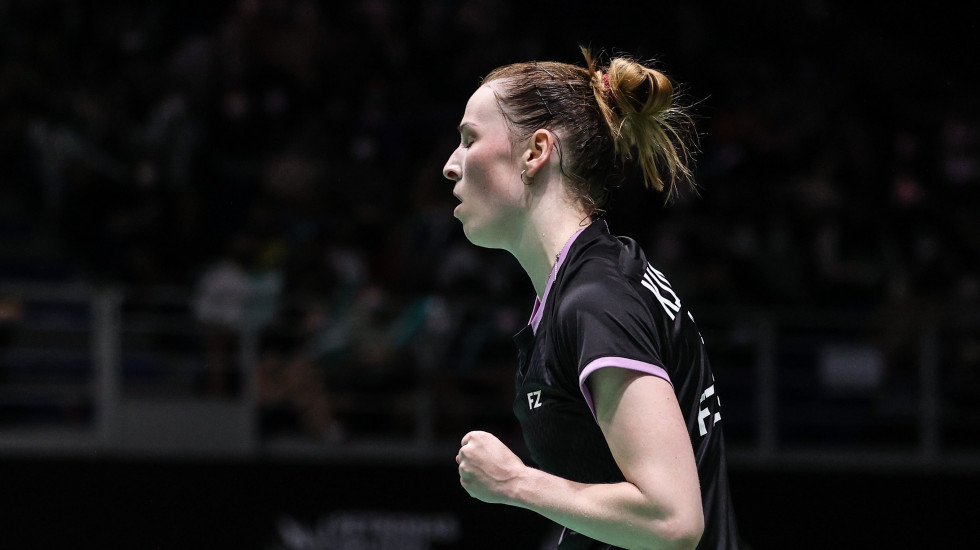 Line Kjaersfeldt finally got it right on her 11th attempt. In 10 previous encounters against Carolina Marin the Dane had never got past the Spaniard; today, in the second round of the PETRONAS Malaysia Open 2022, Kjaersfeldt achieved her long-sought triumph, 21-19 19-21 21-13.

And while Kjaersfeldt herself admitted that Marin wasn’t probably at her best, it was still a grand moment – her third consecutive quarterfinals after making the last-eight at the Indonesia Masters and the Indonesia Open earlier this month.

“I know that she’s just coming back from a really serious injury again, so I also knew that maybe she’s not in her best shape right now. But that’s my chance. And I took it and I’m so happy,” said Kjaersfeldt.

“Marin has set such a high bar in women’s singles, and I tried so many times and I finally beat her, it’s amazing. Two weeks ago I beat Ratchanok; I know I can beat the top players. I love playing her in Malaysia. Of course it’s tough conditions with the drift, but it’s amazing playing here, and I’m also growing mentally, that’s why I’m standing in the quarterfinals.”

“I’m pretty disappointed,” said Marin. “I couldn’t control the shuttle in the drift today. But this is life, it’s sometimes like this. You have to learn from the losses and push on.”

While 2015 champion Marin crashed out, 2016 champion Ratchanok Intanon looked set to follow her out before wresting control against USA’s Beiwen Zhang.

Zhang had a hefty lead at 16-9 but then it all started to go awry, with the conditions posing a challenge that she couldn’t surmount.

“My plan was pretty clear and it was working, but I just couldn’t control the shuttle,” said Zhang. “It was a weird feeling. Also, I’m not sure of my level right now. I should keep my mind clear and just keep doing what I should be doing.”

♦ However, Malaysia didn’t have much luck in the other two doubles, with Pearly Tan/Thinaah Muralitharan falling to Zhang Shu Xian/Zheng Yu, and Chen Tang Jie/Valeree Siow unable to pose much of a threat to Zheng Si Wei/Huang Ya Qiong in a 21-16 21-10 defeat.