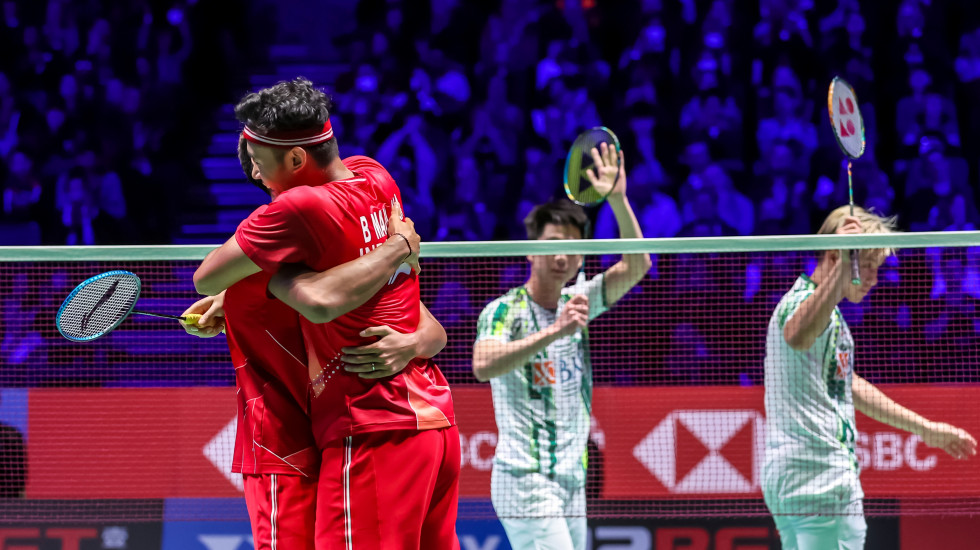 “We had to be brave,” said Muhammad Shohibul Fikri after he and Bagas Maulana overcame seniors and two-time champions Marcus Fernaldi Gideon and Kevin Sanjaya Sukamuljo in the semifinals of the YONEX All England.

Brave they were, for the young Indonesians had to survive an inspired spell from the Minions mid-match. Sukamuljo was nearly unstoppable in the second game, getting his racket on nearly everything, and the challengers had to keep their composure with the Minions sensing blood.

“We thought it was over in the second game the way they were playing, but we managed to overcome that phase,” said Maulana, whose heavy hits from the back complemented his partner’s creative work at the front.

“We are shocked that we are in the final and so happy.”

The world No.28 pair established a healthy lead in the third, and even though the Minions drew close, they shut the door on the first of four match points to make their first World Tour Super 1000 final. The final is a milestone for the duo, for they have never even made it this far in a Super 300 event.

“We train together so we just approached today’s match like we do during training,” said Fikri, who had a standout game at the front, opposite Sukamuljo.

“The most difficult thing was to control our emotions because we felt in a hurry to finish the game. Kevin is very good at the net, so we had to be brave, and try to keep the shuttle away from him.”

The Minions complimented their compatriots.

“They played very well today, congrats to them,” said Gideon. “We couldn’t find our best form and made some mistakes but it was difficult because they know our game and they had nothing to lose. We were always under pressure.”

Changing of the guard for Indonesia 🇮🇩 as Fikri/Maulana cause another massive upset!@HSBC_Sport