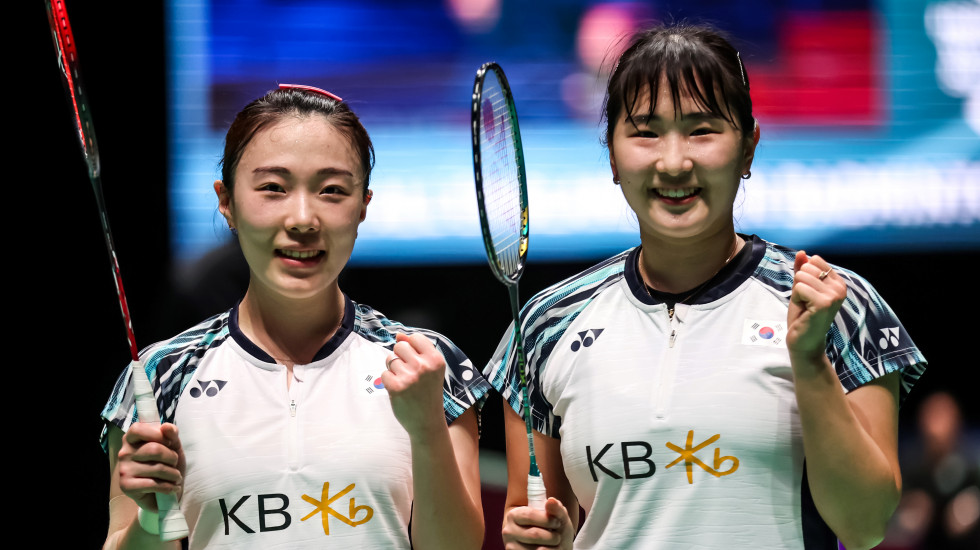 Jeong Na Eun and Kim Hye Jeong have come a long way in quick time; their entry into the quarterfinals at their maiden All England indicate that they are among the pairs to watch this season.

The world No.64 Koreans, who had beaten top seeds Chen Qing Chen/Jia Yi Fan in the opening round, held off a stiff challenge from Thailand’s Supissara Paewsampran/Puttita Supajirakul to make the last eight, where they face Malaysia’s Pearly Tan/Thinaah Muralitharan.

Jeong and Kim came together in October 2019 after stints with other partners. Having missed the whole of 2020, they shot into the final of the first tournament they played in two years – the DAIHATSU Indonesia Masters – where they beat several top pairs, including the Stoeva sisters, Jongkolphan Kititharakul/Rawinida Prajongjai, and senior compatriots Kim Soyeong/Kong Heeyong.

At last week’s German Open, they overcame in-form Japanese duo Chiharu Shida/Nami Matsuyama on their way to the quarterfinals. Having beaten five of the world’s top 10 pairs, the Koreans are building up a reputation as dangerous opponents.

“It might be to do with our attitude, we just want to put it all out there. That’s led to our wins over top 10 players,” says Kim Hye Jeong, who at 24 is senior to her partner by three years. The two claim they are “completely different”, with Kim Hye Jeong stating that her talkative behaviour, on and off court, contrasts with Jeong Na Eun’s introverted personality.

Given that they came together only in late 2019, and having played few tournaments together, the Koreans acknowledge that they have yet to get in sync with each other.

“Obviously we haven’t had time to learn each other’s style, we’re still trying to harmonise, so we try to talk more and play more together. At the moment we are not 100 per cent in sync,” says Jeong Na Eun.

The tournament that fuelled their self-belief was the Indonesia Masters, and Kim Hye Jeong hopes they can keep the momentum.

“It was the first tournament we’d played since Covid hit, and our semifinal performance made us believe in ourselves and we stayed hopeful and that motivated us to play better. We’ve only been able to come this far because we’ve been training very hard.”