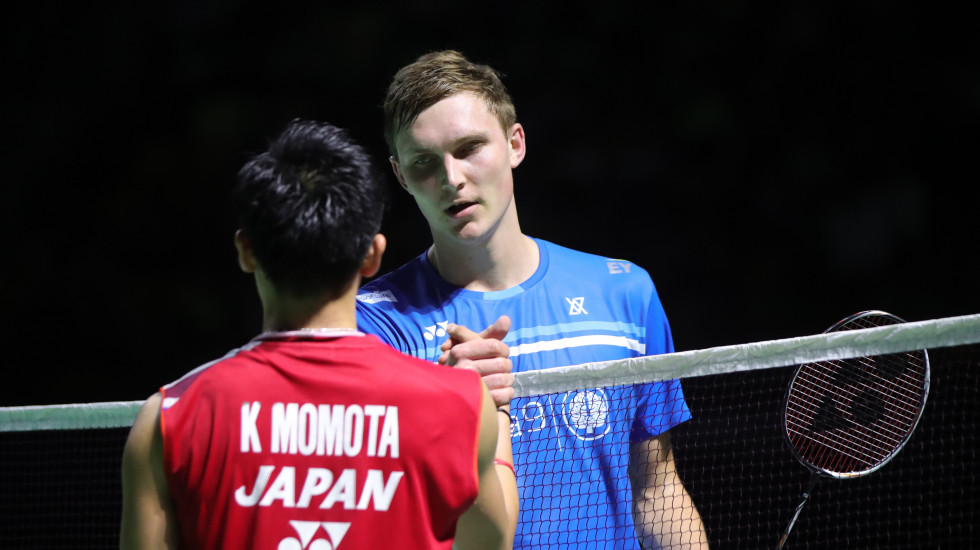 Momota and Axelsen, the two best players of this era.

Kento Momota is 14-1 in career meetings against Viktor Axelsen.

However, when the two meet today in the final of the VICTOR Denmark Open 2021, that will be no more than an interesting statistic. It will have little bearing on what transpires today, for so much has happened in their lives since that last meeting in January 2020.

The subtext to their final today will be how far the Momota of today is from the Momota from before his car accident in January 2020.

The world champion chose to look at the question differently.

In a sense, the final represents a clash between the not-too-distant past – the Momota of pre-January 2020 – and the present, the Axelsen of 2021, the Olympic champion, the man who has lost just two of his 50 matches this year. It will be a pointer to where Momota stands, how far he has come since the trauma of the accident and subsequent setbacks such as his shock loss at Tokyo 2020. Recent results have been a mixed bag; his performance against the nearly flawless Axelsen will be an accurate estimate of his current form.

The 14-1 statistic is mostly representative of the past that Momota doesn’t want to dwell on anymore. It was of a time when he was the one opponent Axelsen could never get the better of over a prolonged period. Axelsen needs no extra motivation, but it will be important for him that he is playing in his hometown, in the final of a tournament that he has never won.

With Axelsen having lost just two matches this year, even as he made his eighth final of 2021, most would have him as favourite. Momota could not but back himself.

“At this point, it will be very silly if I say Viktor is going to win. So I will say that I will win. I will keep my feelings strong,” said Momota.

“Finally, we get to play. I’m very excited. But now Viktor plays nearly perfectly, so I’m a bit concerned about that. But I will try to enjoy it as much as I can. We’ve been looking forward to this match. We respect each other as players so I will do my best.”

As for Axelsen himself, the Dane was his usual cautious self, only stating that he had to be at his best if he had to finally get the better of his former nemesis.

“For me, personally, it’s a great matchup. I’ve had a bit of a hard time against Momota, so tomorrow I want to do better. I want to see if I can beat him. I’m feeling confident, I’m looking forward to it. I have huge respect for Momota, he’s a really strong opponent, so it will be a fun experience for sure.”