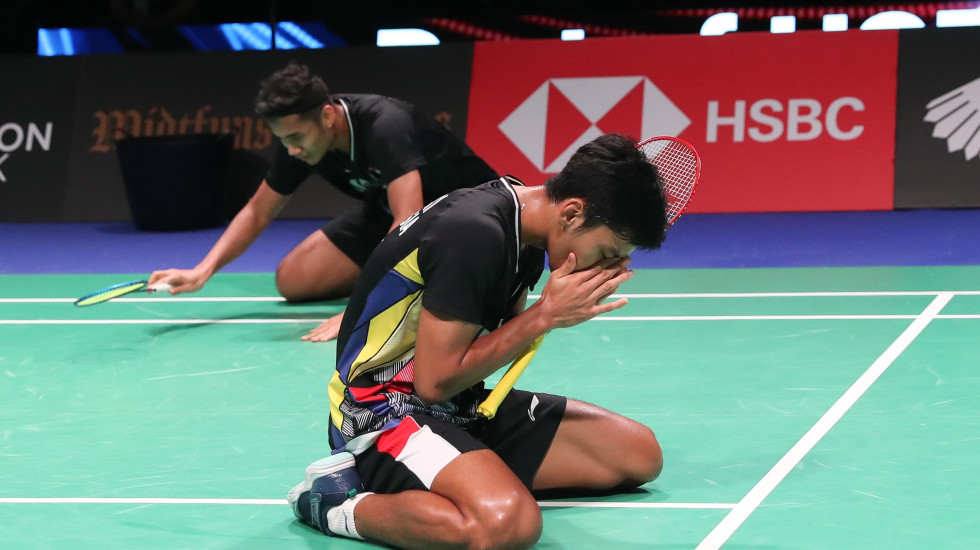 Indonesia’s young doubles pairs made an impression in the second round of the VICTOR Denmark Open 2021.

Fikri and Maulana never let their senior compatriots off the hook in a close third game; the Minions saved two match points before succumbing on the third.

“They played really well today, and we were not lucky at the end,” said Gideon.

“I’m thankful that we could beat them. We had nothing to lose and we tried to enjoy the game. Coming in, we were very nervous and playing our seniors, but we felt better once the match started. We’ve never beaten Marcus and Kevin during practice, this is our first win so we are very happy,” said Fikri.

Another young Indonesian pair, Kusumawardana/Rambitan, looked set to take the second game against eighth seeds Kim Astrup/Anders Skaarup Rasmussen with an 18-12 lead. The Danes however ran up a winning streak from that stage, taking the next nine points to win 21-15 21-18 to enter their first quarterfinals in nine attempts at the Denmark Open.

“Sometimes when you are behind and think this set is lost you find some kind of relaxed state of mind. We pushed through all the way. Usually you have a stop at 18 or 19, but we kept on going and they made some mistakes for us; I think they struggled with Kim’s serve. We really impressed ourselves,” said Rasmussen.

“The last eight times we’ve never been through to the quarterfinals, this is our first time. That means a lot to us. We’ve never been able to give our home crowd the level they deserve so we were both shaking a bit after the match. We had goosebumps,” said Astrup.