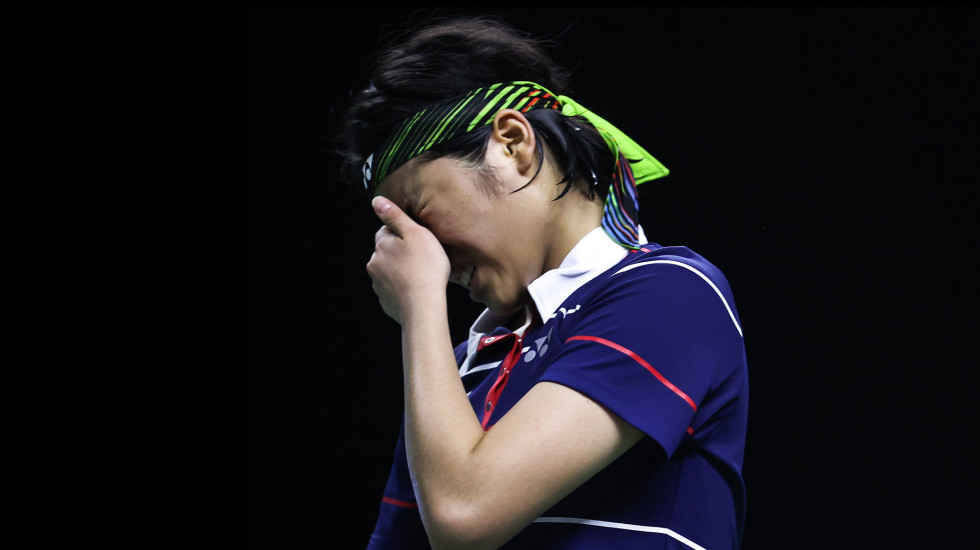 An Se Young was outplayed by Carolina Marin.

A youthful charge into the finals of the YONEX Thailand Open was very much on the cards today, but it was stymied by craftier, more experienced hands.

First it was Thom Gicquel and Delphine Delrue. Then followed Leo Rolly Carnando and Daniel Marthin, and finally An Se Young.

Gicquel and Delrue, both 22 and knocking on the doors of the top 10 – a remarkable achievement illustrating their rapid progress – had Praveen Jordan and Melati Daeva Oktavianti in discomfort all through their 46-minute encounter. The French were annoyed with themselves for what they considered a sub-par performance, but in fact they had stood up well against the formidable skills of their Indonesian opponents, so much so that Jordan got few smash winners in the entire second game.

It was a sticky affair, full of jabs and placements rather than rapid-fire exchanges, with Delrue and Oktavianti vying for dominance of the net. Jordan’s smash, usually a sure-shot winner, was handled well by the French duo.

Gicquel was harsh on himself:

“It was 50-50 for me, if I had served better we could have won this match. We came here to beat the top five and we’re looking for these kind of matches and we’re not happy with the way we played.”

World junior champions Carnando and Marthin raised visions of an upset against Goh V Shem and Tan Wee Kiong when they nearly climbed level from being 10-17 down. Once the veteran Malaysians clinched the opening game, it was all one-way traffic.

“Even though we lost, we are grateful to have reached the semifinals,” said Marthin. “At the same time, reaching this stage is not enough. I didn’t play well and made a lot of unforced errors because the drift was strong. It made it awkward. Our strategy didn’t work out and we weren’t able to follow our plan.”

An Se Young had beaten Carolina Marin once, in the French Open 2019 final, and matched her throughout the opening game. Her solid defence game challenged the Spaniard to come up with answers, and it was touch-and-go before Marin edged ahead at 21-18. It was easier passage for Marin from then on, with An Se Young unable to sustain the quality of her shots towards the closing stages of the second.

The Korean teenager was clear about what had gone wrong for her, and promised to do better next time.

“I think I wasn’t feeling confident today. I was being too careful so that was the problem. It’s a little disappointing that I couldn’t do as well as I wanted to. What I have learned today about my opponent is that I need to be faster. I guess these learnings come with more experience.

“If I get to play against her again I will be more active and go in with more confidence. She is fast so I will do my best to prepare both my defence and attack in order to win next time.”