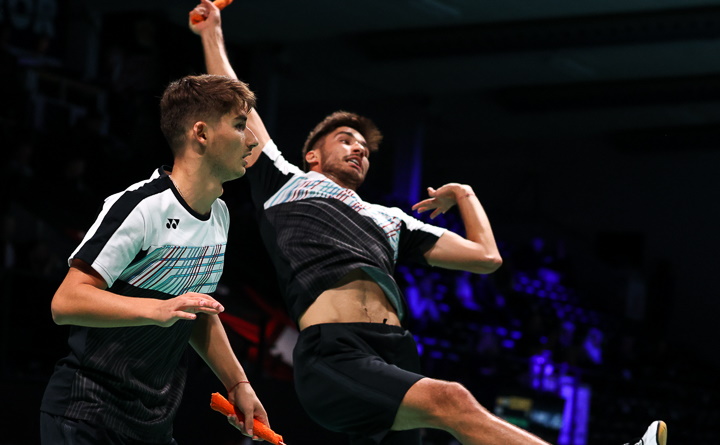 Popov Brothers: On a Badminton Journey Together

The Popov brothers – Toma Junior  and Christo – consider themselves singles specialists, so it was with some surprise that they found themselves in the doubles quarterfinals after early singles exits at the DANISA Denmark Open 2020.

Luck did play a part, for their second round opponents and top seeds Takeshi Kamura and Keigo Sonoda had withdrawn, and a first round win sufficed for their best placing at a World Tour Super 750 event.

“We just play doubles for fun. If we win, it’s a bonus, but we never train doubles,” said Toma Junior, 22, Christo’s senior by four years. “This is our first doubles since the Barcelona Spain Masters in March. So we needed one game to get into the (first round) match.”

With their father Toma as coach, the Popovs are a deeply committed badminton family. Pairing up with one’s brother has its benefits, said Christo.

“It’s not the same if we were not from the same family. Our confidence is better. We can count on each other. And our father is our coach, so it’s like a triangle, with the family,” said the younger Popov, 18, who last year was runner-up at the World Junior Championships and the first medallist at that event for France.

Both brothers have significant accomplishments – mostly in singles, but also in doubles. Toma Junior had a terrific season in 2018, winning five singles titles, including three back to back, and a double at the Bulgarian Open with his brother. Last year saw him win the singles at the Bulgarian Open and the Irish Open.

Meanwhile, Christo has also rapidly made his way up as one of Europe’s brightest prospects. He won the Hungarian International, was runner-up at the World Juniors, and semifinalist at the Scottish Open. At the Italian International he won the singles and was doubles runner-up with his brother.

There are times when they run into each other in the singles draw.

“It’s awkward to play each other during a tournament,” Christo admits. “Last year we played three or four times. As long as one of us goes ahead, it’s ok.”

Being a badminton family – their father, a former player, has set up an academy at which the brothers train, badminton is a constant, inescapable part of their lives.

“Sometimes we need a break from badminton, but our family is into it – our uncle, mother, and both of us,” says Toma Junior. “We’re used to it, it’s our life to play badminton, so it’s normal for us to talk badminton all the time.”