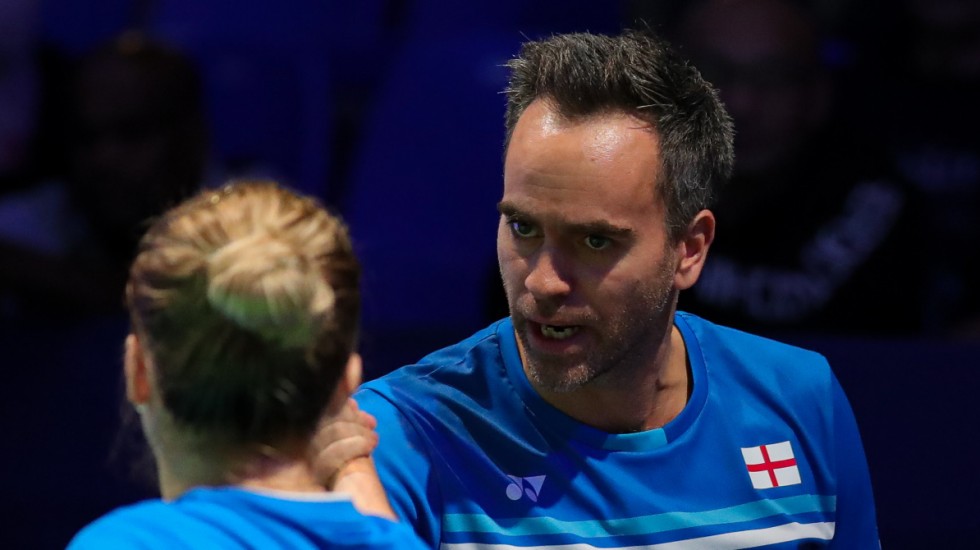 Joachim Fischer Nielsen in his new role as England coach.

Until he finished his career at the Hong Kong Open in 2018 a week short of his 40th birthday, Joachim Fischer Nielsen was renowned for his intensity and intelligence on court.

The Danish left-hander had a stellar career with numerous accolades, the most significant of which were bronze medals at the London Olympics and two World Championships, besides a number of Superseries titles.

After a brief hiatus, Fischer is back – as coach with the England team, where he will assist, among others, a pair he frequently competed against: Chris Adcock and Gabrielle Adcock.

In part one of this interview, Fischer talks about his foray into coaching, and his analysis of what ails European badminton:

Can you talk about your new role with the England badminton team?

I needed to get a long way from badminton, the first half of the year at least. Then I got talking with the England association. I’ve been fighting them in mixed doubles for a long time and I’ve always had respect for them, I like the way they set up stuff and they’re professional. It was natural when we started talking, that this could be a solution.

I still live in Copenhagen. I’m hired eight days a month. I go there (UK) every second weekend for four days, and then I take care of most of the mixed doubles, but I’m also looking at the singles and giving feedback for the coaches and they can take what they want.

What aspects of training do you hope to address?

I’ve been hired as a consultant. Mostly my eyes are on Chris and Gabby and other players on the Tour. I started at the French Open in 2019, and we have a five-month contract to see how it’s going. Chris and Gabby played well at the French Open, so that was a good start. Now we’re here, trying to get Chris and Gabby to put up a few new things, which will take some time. I want them to change their game a little bit, but we’re in a bit of a hurry, as this is the Olympic season. And there are other pairs also.

My contract is until the end of March, depending how it goes. For me it was fine not to make the contract longer. I wasn’t sure I wanted to come back to badminton, I felt like I did my stuff in life, but with Chris and Gabby, I’ve competed with them for many years, it was interesting with them and a lot of the others. To be honest I like to work with the best players, that’s why I think I’ve been hired as a coach. I want to see what we can improve in England right now.

European players aren’t challenging for medals in all categories like they used to not so long ago. What, in your opinion, has changed?

I follow the singles also, and there is a big challenge for the Europeans right now. The Asians have got stronger and stronger, so we need to step up even more. We need to be better at analysing the game, I think too many of the Europeans are just… playing. We need to find the weakness in the Asian players, and right now we’re not that many. I need to get the players to understand where the gaps are. And I hope I can help them do that.

Traditionally, in European badminton – or at least Danish badminton – there was emphasis on tactics, on the mental side of the game. Are you saying that players aren’t thinking as much?

To be honest, I feel that we’ve lost it a little bit, the Europeans. We were good at thinking and reading our opponents. I feel the Europeans are struggling in reading the game now. It’s also faster, it’s also crazy in this way – we need to be better taking our fights in the right timing. Right now we’re fighting too much in speed with them, and we cannot beat the Asians in speed. We can beat them with control I think. Of course it’s easier said than done. But I think there are opportunities. We need to change the mindset a little bit, get back to old school, the way we played years ago. That’s my job to get it going.

You retired in 2018. It’s been just over a year. Has the game become faster in this short period?

The thing is also, that it’s the Asian players playing now, there are not that many European pairs fighting with them. I think the men’s doubles has become faster. In mixed doubles those two Chinese pairs (Zheng Si Wei/Huang Ya Qiong and Wang Yi Lyu/Huang Dong Ping) play really fast, but I think if you have the European style against them, you still have a chance. Not saying you can win, but you have a chance. But as soon as you play speed against them, you’re going to get killed on court. And too many players are doing that right now.

With the Adcocks, what specific areas are you working on?

Chris is of course left-handed like me and I’m trying to put some things in to their game that me and Christinna were using. I cannot say much, but we’re trying to set up the rallies a bit more than what they were used to. That’s of course a challenge, because once again we’re fighting against time. We need to change their mindset, they’re working hard, they’re trying their best. I hope they will get some good results because they deserve that.