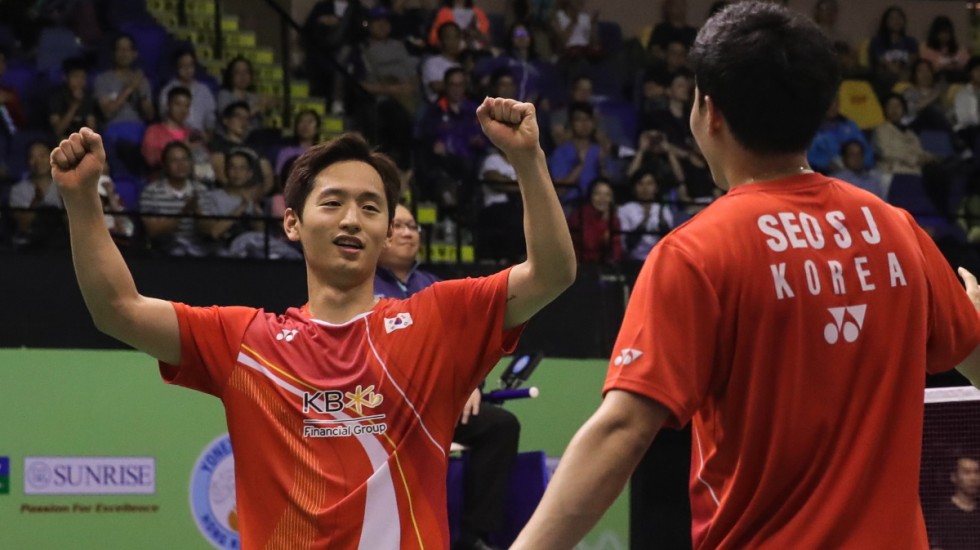 Choi Solgyu (left) and Seo Seung Jae showed they have arrived on the big league.

The Koreans, who were in their first major final, survived a torrid opening spell to eventually haul past the world champions, 13-21 21-12 21-13.

Through the early part of the match it appeared the ‘Daddies’ would run through their opponents. The Koreans were left stranded on most rallies with Ahsan and Setiawan excelling in the quick exchanges.

Things turned in the second; the Koreans were able to open up the game rather than be caught in their opponents’ constricting style. On the other hand, the Indonesians, against the run of play, committed a succession of errors. Setiawan first, and then Ahsan, blew winning shots into the net, helping the Koreans revive their morale. Choi turned into a menacing presence at the front, while Seo was able to clip winners when the shuttle was lifted high.

Ahsan and Setiawan briefly recovered in the decider, but they never could get a grip on the match. Ahsan was particularly wayward; the day was summed up for the Daddies when Setiawan played a weak shot into the net match point down.

“This is our first big title and we are very happy,” said Choi. “The opening game was embarrassing for us because they controlled the net exchanges so well. We were able to overcome that and get ahead. This means a lot, but first we will have to get ready for the Korea Masters next week at home.”

Setiawan, explaining the ununsual sequence of errors by the Indonesians, said the physical effort had taken its toll.

“Our stamina must have decreased, it was most apparent in the second and third games. Our opponents didn’t give up. They found their game, their defence was tight,” Setiawan said.

Japan’s Yuta Watanabe and Arisa Higashino, who had started the year with a Super 500 title in Malaysia, captured the year’s last Super 500 as well.

The fourth seeds pulled off an impressive escape against China’s He Ji Ting/Du Yue from 12-17 down to take the opening game, and pressed on from there to wrap it up 22-20 21-16.

There were some sensational rallies that earned prolonged applause from the crowd. The Koreans battled on even terms until 13-all in the deciding game, after which the Koreans slipped just that little bit and the Chinese pounced on the opening to complete their victory for their fifth title of the year.

Play of the Day | 122 shots in a single rally pushed the players to the absolute limit 🔥#HSBCBWFbadminton #HSBCRacetoGuangzhou pic.twitter.com/NWtTqBMylF