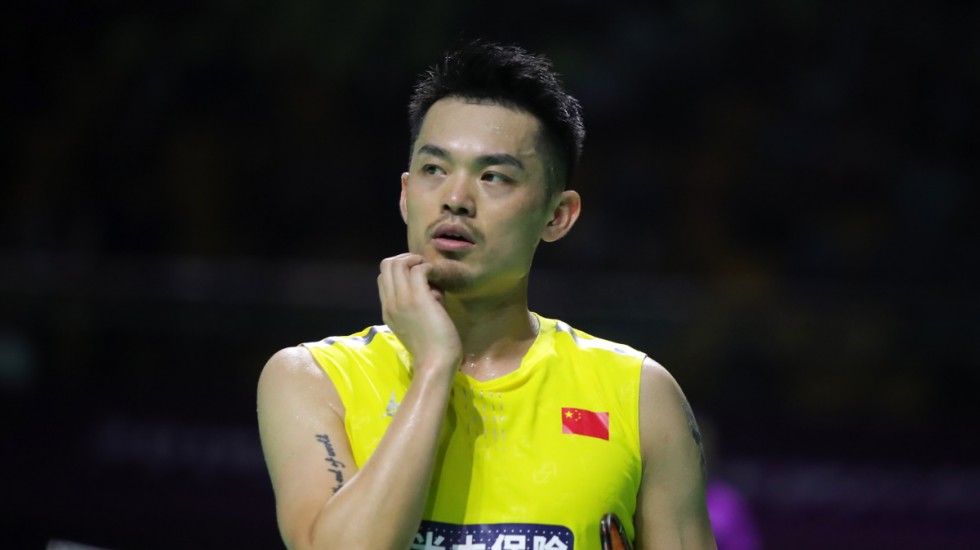 Lin Dan has plenty to ponder following another first round loss.

Lin Declares He Will Fight On

It wasn’t the result he wanted, but Lin Dan’s opening round loss to Chen Long at the Fuzhou China Open 2019 wouldn’t be his last appearance, the two-time Olympic champion asserted.

Lin was scotching feverish speculation in the media that he would call time on his eventful career at the China Open in the case of his ninth opening-round exit this year.

The rumours of his retirement had gained currency with Lin currently in the 18th spot of the BWF world rankings, way behind compatriots Chen Long (No.3) and Shi Yu Qi (No.4). With a maximum of two players from each Member Association eligible to qualify to the Tokyo Olympics if they are in the top 16 (as of 30 April 2020), Lin’s chances have receded, but he stated that he would continue his attempts to qualify.

“Qualifying to the Tokyo Olympics is my biggest challenge; I will continue to do my best and try to get better results out of competitions,” Lin said, following his 19-21 21-12 21-12 loss to Chen. “I feel some regret that I couldn’t win today.”

Given that he hadn’t crossed the second round of his last seven tournaments, and that he was taking on fellow-Olympic contender Chen Long, there was a buzz in the air when the two clashed in the first round.

Lin was quick and sharp, using his deft wristwork to stay ahead of his younger opponent and showing greater initiative than he has in the recent past.

And when he drew Chen to the net and slapped the shuttle past him, he celebrated with a vigorous fist pump.

Among those keenly watching was Kento Momota, seen by many as Lin’s possible successor. Momota frequently let out gasps of admiration and shadow-played Lin’s shots as the veteran drew on his considerable resources to outplay his rival in the opening game.

Chen, with the relentlessness of a machine, continued to play at a high pace and gave little away. Lin saved his breath for the third game, but Chen never let him get close. Still, the tension of the occasion was apparent, for Chen glared at his rival – and then apologised – when Lin missed a kill at the net close to the end. His celebrations were more animated than usual.

For now, fans will be reassured that Lin has entered two tournaments in the next two weeks – the Hong Kong Open and the Gwangju Korea Masters.