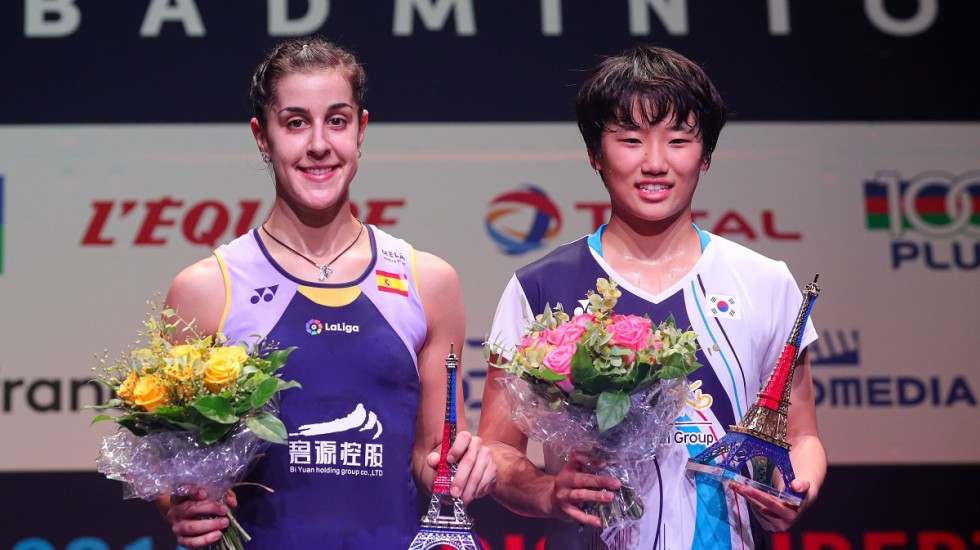 An Se Young’s Day in the Sun – French Open: Finals

An Se Young’s time has arrived. No longer is she just the next big thing in badminton. From the way she played today, she’s now one of the most feared athletes on tour.

The Korean was simply too good for Olympic champion Carolina Marin in the French Open final. The 17-year-old’s superior skills on the flat exchanges and ability to dominate the net bode well for her. Marin simply had no answers with her usual steely spirit broken.

“The fact I’m young helps me a lot because I don’t fear anything.”

An is the youngest women’s singles winner of a Super 500 tournament or above on the HSBC BWF World Tour and joins the likes of Akane Yamaguchi, Tai Tzu Ying and Ratchanok Intanon as teenage winners of tournaments of such billing.

She’s also the first Korean player since Sung Ji Hyun in 2015 to win a Superseries or World Tour title at this level.

An clearly took learning points out of her three-game loss to the Spaniard last week in Denmark. On that occasion, she failed to capitalise on a 13-8 buffer in the decider. Today, she adjusted her playing style and used the slower speed of the Paris hall to her advantage.

At 0-2 down in the third she raised her level and won the next eight points to unsettle the 26-year-old Spaniard. The final exchanges were a mere formality as the Korean struck winner after winner to secure her first Super 750 title.

“I learned from Denmark that I should not be as aggressive as her. That’s what helped me today. To control my speed and be less attacking,” she said.

“In the first game, I was a bit too quick. But at the break, my coach told me to slow it down and that enabled me to get the advantage in the second and third.”

Marin paid credit to her opponent and said it was still a good week for her.

“I tried to win in two games because I knew going to a third would be tough. But she played really well and I just made too many mistakes in the second and third.

“It’s still a good week for me. I beat three top players in [Nozomi] Okuhara, Ratchanok [Intanon] and Tai. I will now analyse what happened and continue to improve my play.”