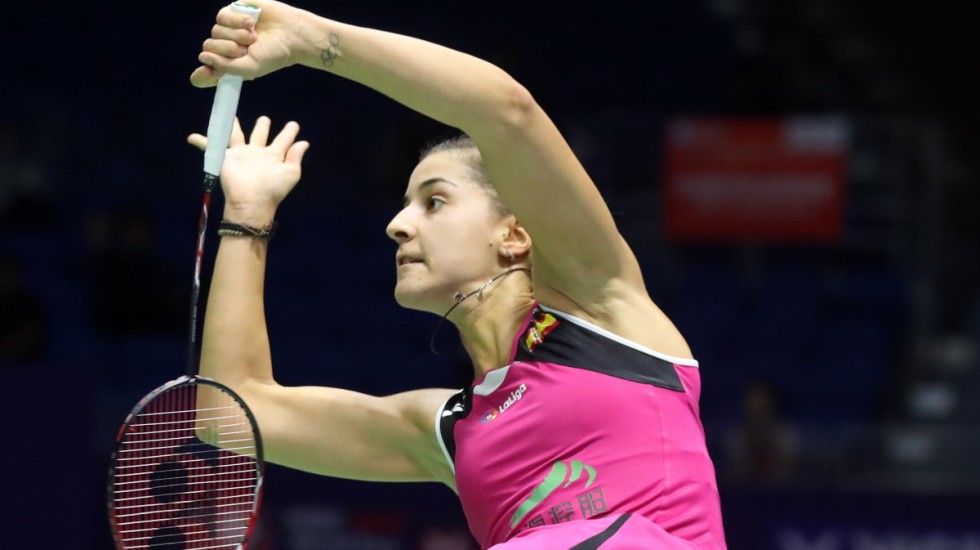 Carolina Marin’s form showed no sign of letting up as she won the third straight match of her comeback – muscling aside He Bing Jiao to enter the semifinals of the VICTOR China Open 2019.

What might further enthuse her was the upset of Ratchanok Intanon, who was due to meet her in the last-four, for Intanon has a 6-3 career record over Marin. The Thai was stunned by Sayaka Takahashi in a thriller, 14-21 21-14 22-20, in the top quarter.

He Bing Jiao had beaten Marin only once in five previous clashes, but the Chinese started smoothly, powering to a first game win with 11 of the last 12 points. Marin though was not disheartened and quickly recovered her poise. With her speed and sharp angles she established her dominance of the rallies, and after 6-all in the second game, the Spaniard was on top.

The Chinese made a great comeback in the third, levelling at 12 after trailing by seven points. A tremendous 38-shot rally followed, with He Bing Jiao sensing her chance to go ahead and Marin staying steady as a rock. The Spaniard caught the Chinese with an attacking clear that she failed to anticipate and the match quickly turned from that point, with Marin running away with it: 11-21 21-14 21-15.

“I knew it would be tough, as she was playing at home. Sometimes for me it was difficult.  I just wanted to keep thinking about what I had to do,” said Marin.

Takahashi conjured a stunning comeback against Intanon from 4-12 in the third game. The Japanese caught up with Intanon at 13 and held narrow leads, only for Intanon to climb back level. The Thai saved two match points but Takahashi converted her third opportunity to seal her place in the Super 1000 semifinals.

“I was trailing by a lot but I managed to bounce back so I’m extremely happy. This is not the final, I’ll continue to work hard. I was playing against the wind in the third game, that’s why it felt like my opponent’s attack was very strong. But I was able to defend well,” said the Japanese.

“I was really motivated to go in there and get the win today. Before this match I was 0-5 to Chou so wanted to make sure that that win streak ended right here today. Most of all, I had to play at a high pace and play an attacking style,” – Anders Antonsen.