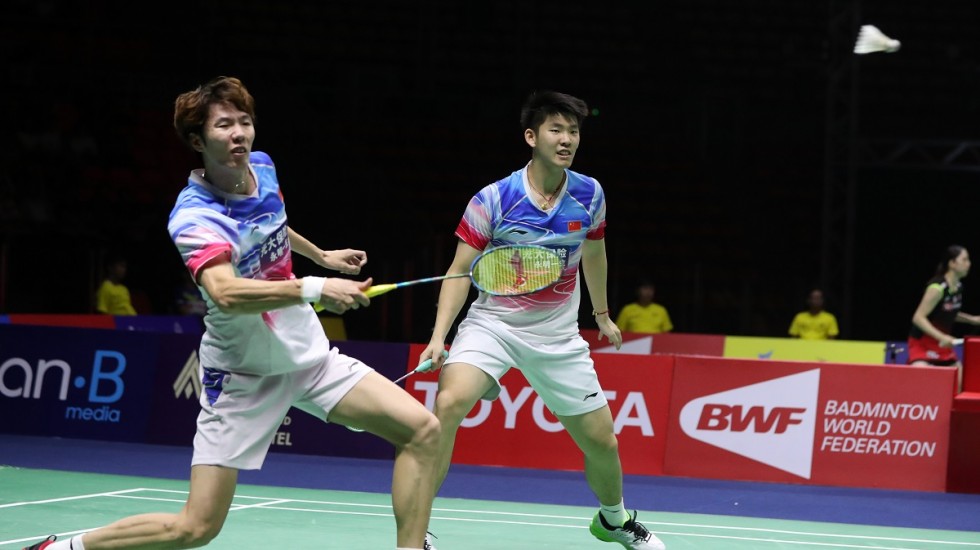 Li Jun Hui and Liu Yu Chen are one step away from the win.

China’s Li Jun Hui/Liu Yu Chen were the first to book their place in the final of the TOYOTA Thailand Open 2019 when they beat Hiroyuki Endo/Yuta Watanabe 21-13 22-20 in the men’s doubles.

Li said: “Today we felt the venue was windy. We had to play in the direction of the wind and finally we managed to win. I felt satisfied with our performance because we both attacked and defended well. The atmosphere in the arena was good because there were many fans who cheered for us. It made me feel happy.”

Evaluating their performance, Yuta Watanabe said: “The Chinese pair play very high-level badminton not just in strength and fitness but skill and strategy too. We’ll have to go back and look at ways to improve ourselves on all that.”

“After the last point I was so emotional and started crying,” said Rankireddy.

Shetty said: “I grew up idolising them, watching them play and now I’ve just beaten them on the court.”

While the first game was not a breeze but went the Indians’ way, the second had them rattled. Despite trailing 13-19, the Indian pair caught up to force a deuce at 20-20 but an over-eagerness to finish saw them hand it to the Koreans. In the third, in their usual calm and confident style, they sealed their final spot with 21-9.

Shetty and Rankireddy, who are in their first final of a Super 500 event do not seem deterred by the almost fearsome on-court reputation of their Chinese opponents.

“It’s been a difficult first four months of the year because Satwik was injured and we only started to play again in May so we never expected to be in the finals, but I think that if we play the way we’ve been doing the last few days, we have as much chance as them to win,” said Shetty.

With Ko and Shin’s loss, Korea will no longer be represented in the tournament as both the women’s doubles pairs were defeated in their semifinal matches.

Du and Li will face Japan’s women’s doubles of Shiho Tanaka and Koharu Yonemoto who made easy work of Chang Ye Na and Kim Hye Rin, 21-9 21-9.

Intanon will face China’s Chen Yu Fei who is in the final after defeating Japan’s Sayaka Takahashi, 21- 21-19.

While eager to please her fans and reward them with a win for their support, Intanon believes it will not be easy as Chen has been in top form all week. “I’m glad today is over but now I need to study Chen’s game and prepare for tomorrow.”

“First of all, I would like to say thank you to my friend Du Yue because last night she played almost 60 minutes in the mixed doubles.

I really appreciate her support. Today we were not comfortable playing against the opponents right until the end.

I felt our performance today was normal but we managed to keep going in a difficult situation. We will play against the Japanese tomorrow and we have never won against this women’s doubles pair. We’ve lost twice.” – Li Yin Hui

In the men’s singles, Lee Zii Jia’s stinging smashes stunned Chou Tien Chen of Chinese Taipei a few times but experience prevailed in the end as Chou took control of the match, winning 21-14 22-20.

Yuta Watanabe may have missed his chance at the men’s doubles title but he has a shot at the mixed doubles with partner Arisa Higashino after they ousted Hong Kong China’s Tang Chun Man and Tse Ying Suet, 21-14 21-9.

Thailand’s Dechapol Puavaranukroh/Sapsiree Taerattanachai couldn’t get over the line for their adoring home fans as they succumbed to China’s Wang Yi Lyu/Huang Dong Ping 22-20 11-21 14-21 in the mixed doubles.