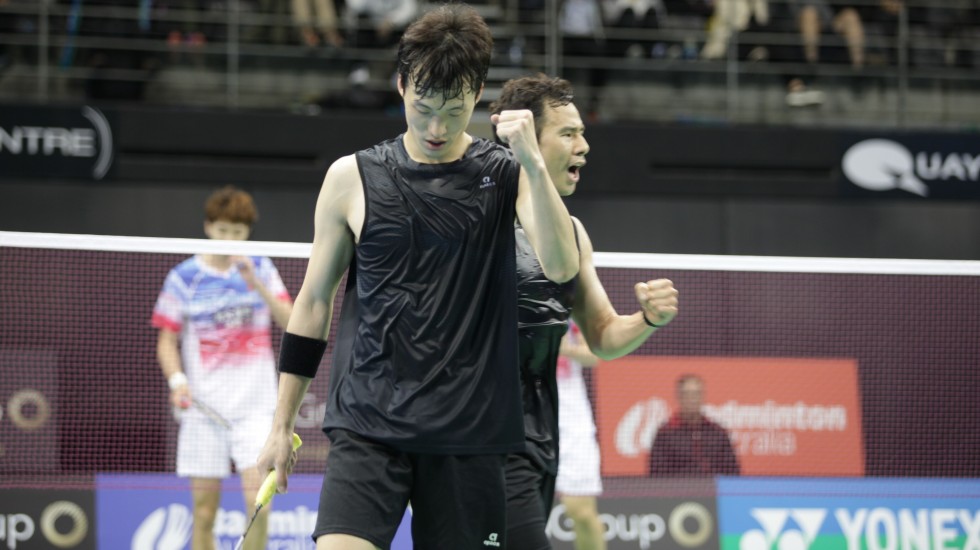 The 2014 world champions from Korea, who retired from the national team after Rio 2016, proved to be more than a match for the current world champions as they won in 55 minutes: 21-11 14-21 21-17. Although they had beaten the Chinese four times previously, all four wins were in 2015-2016 when Li and Liu were still emerging prospects.

“I think we did lose the momentum for a while after we had won at the first game. We tried to focus again and did our best at the second game, which led to our victory,” said Shin.

“Before we retired, we had won four times against the Chinese who were not high-ranking players back then.”

They face top seeds Takeshi Kamura/Keigo Sonoda who got past another Korean pair, Choi Solgyu/Seo Seung Jae, in a close contest, 23-25 21-19 21-14.

“Well, our opponents won the first game. In the second, at first they were in the lead. But we stayed positive and patient. Then we were caught them in the middle. In the final, we were in the lead, that was a good situation,” said Sonoda.

“I think we can win the final if we concentrate enough until the end. We would like to work on that and to be prepared well,” said Kamura.

The tightest contest of the day was in women’s doubles, with Yuki Fukushima/Sayaka Hirota getting the better of senior compatriots Misaki Matsutomo/Ayaka Takahashi after trailing 15-19 in the decider: 15-21 21-15 23-21.

They face Chen Qingchen/Jia Yifan, who also prevailed in a close battle against Greysia Polii/Apriyani Rahayu, 21-13 14-21 21-18.

“Praveen Jordan was really strong in this match and I think we gave him too many opportunities to attack,” rued Watanabe.

“I feel like I am playing better. I am not rushing to win but trying my best to be patient,” said Okuhara, who is looking for her first title this year.

“It’s not easy to win these tournaments so I’m very proud of myself to be here. I haven’t won a final in the last six months so I would like to challenge and win so that I can prove myself more stronger and that will give me more confidence.”