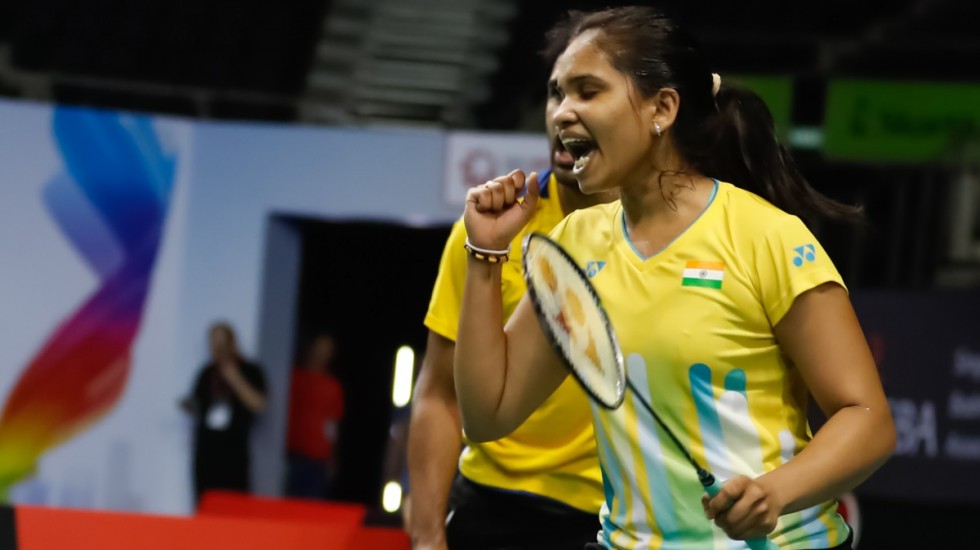 Pranaav Jerry Chopra and Sikki Reddy recovered from a second game hammering to get the better of fifth seeds Tang Chun Man and Tse Ying Suet and entered the mixed doubles quarterfinals of the Singapore Open 2019 today.

“We’ve watched them and knew it wasn’t going to be easy as they’re two left-handers, which you never get to play in practice,” said Reddy.

“It was going to be tricky, but as I’m a lefty, we have a good understanding of that game and knew how to catch them. In the second game we lost the flow because of the drift. We couldn’t understand what was happening. By the time we got the hang of it they had a big lead. So we decided to start afresh and start intercepting more at the net.

“The angle becomes different,” added Reddy, on the challenges of playing their left-handed opponents. “As a left-hander, I know that the angles are sharp and it’s not going to be the Asian style of fast rallies, it will be crosscourt drops, half-smashes, half-smashes down the centre, while at the net too they can intercept quite well. We were prepared for that.”

Tse, coming back from a shoulder injury, said she was still rebuilding her strength. The Hong Kong duo played last week’s Malaysia Open, where they crashed in the first round.

Kidambi Srikanth recovered from a near-hopeless position in the second game against Hans-Kristian Vittinghus, erasing deficits of 3-12 and 9-17 to get past the Dane, 21-12 23-21.

Kidambi’s compatriot Parupalli Kashyap proved a handful for Chen Long, but the fourth-seeded Chinese kept his foot on the pedal to take the match 21-9 15-21 21-16.

“This is my fourth time meeting Li Zii Jia, I think we know each other’s weaknesses and strengths. But I am not sure why in the last two matches that I have faced him, it seems he is under a lot of pressure. He is a very good player, he has a very good attack and defence but he made a lot of unforced errors. His spirit has been quite down in the last two matches” – Jonatan Christie, after beating Lee Zii Jia 21-13 21-12.