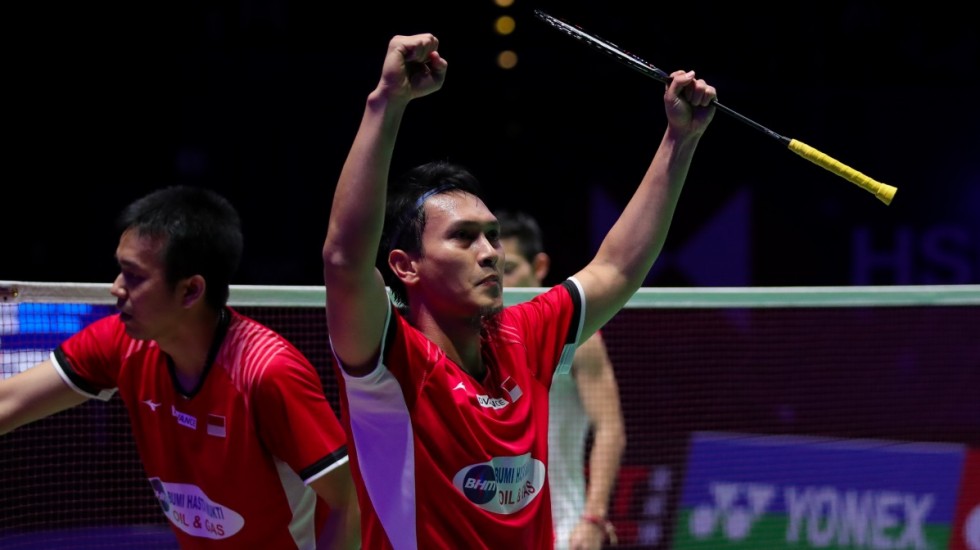 Veterans Mohammad Ahsan and Hendra Setiawan rolled back the years to earn a title shot at the Yonex All England which they last won in 2014.

With their surprisingly one-sided 21-19 21-16 victory over third seeds Takeshi Kamura/Keigo Sonoda, the Indonesians are one win away from their biggest title in years. Not since the Dubai World Superseries Finals in 2015 have Ahsan and Setiawan made the final of a tournament of this level.

The other matches of the first session on semifinals day followed seedings, with Kento Momota in men’s singles and Tai Tzu Ying in women’s singles staying on track to create history.

Ahsan and Setiawan continued on their road to revival of their glory days, bringing back glimpses of their vintage style. The Japanese, so sharp yesterday, just couldn’t get into rhythm against the soft touch and quick changes of pace of the Indonesians. After losing a close opening game, the Indonesians hit a breezy spell, picking off winners at will even though Setiawan limped with a strained right calf.

With the Indonesians policing the net effectively, it was heavy going for Kamura and Sonoda as they trailed 5-11. The lead started to slip with some erratic play; the Japanese inched close before the Indonesians shut the door in time.

“They were trying to slow down the tempo and keep the shuttle deep, but we changed our pattern of play, with Hendra a lot deeper,” said Ahsan.

For the History Books

World champion Kento Momota will aim to become the first Japanese men’s singles winner of the All England after fighting off Hong Kong’s Ng Ka Long Angus in the semifinals today, 21-19 21-11.

In women’s singles, Tai Tzu Ying has the opportunity to emulate Xie Xingfang, who was the last women’s singles player to win a hat-trick 12 years ago. Tai overcame dogged resistance from Akane Yamaguchi, 21-13 10-21 21-8.

Angus had Momota in trouble with his searing pace in the opening game, forcing Momota to dig deep. At 19-all Momota showed some quicksilver reflexes to prevent his opponent from gaining game point, and he converted at the first opportunity.

“I was able to stay close to him in the opening game, but my stamina dipped in the second,” said Angus. “He’s a very steady player and defends very well, and that makes it hard to score points.”

Momota is the third Japanese in the men’s singles final after Masao Akiyama in 1966 and Kenichi Tago in 2010.