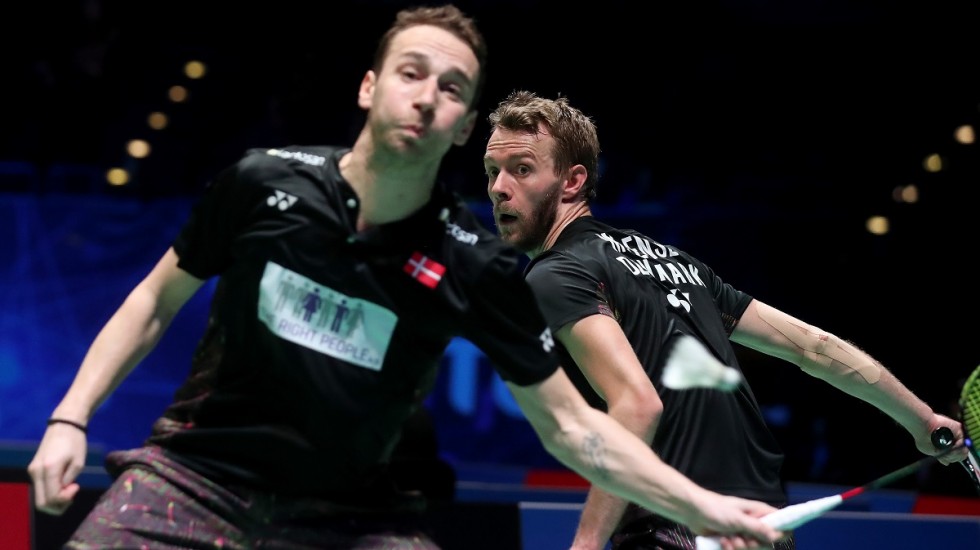 Boe and Mogensen in unison at last year's All England Open 2018.

Boe and Mogensen Set For Swansong at All England

The pair announced the decision on Facebook on Friday.

The 2012 Olympic silver medallists and former World No.1’s have seen their ranking plummet outside the top 20, and have suffered a string of first or second round defeats since contesting a fourth All England final last year.

It brings an end to a 15-year partnership – one of the most successful in men’s doubles – which includes six All England semifinal appearances and gold at the inaugural European Games in Baku, Azerbaijan in 2015.

Boe, 38, told allenglandbadminton.com that this week was always a special one for the pair.

“The All England is our favourite tournament and we are really excited and looking forward to coming to Birmingham,” he said.

“Even though we’ve played there so many times, it’s still a super thrilling excitement.

“I’m really happy that I’ve been good and lucky enough to win it twice, but to win it three times would be a dream come true,” he added, in regards to a possible fairy tale result.

Boe and Mogensen will play Korea’s Choi Sol Gyi and Seo Seung Jae in round one of the YONEX All England Open Badminton Championships 2019.

Badminton Denmark announced new men’s doubles pairings for after the All England Open, with Boe to reunite with Mads Conrad-Petersen, having previously played together at the Thomas Cup, and Mogensen to commence a new partnership with Mads Pieler Kolding at the Singapore Open 2019.

Boe and Conrad-Petersen will play a number of European tournaments in an effort to increase their ranking, with the YONEX Polish Open 2019 on 28 March their first outing together.