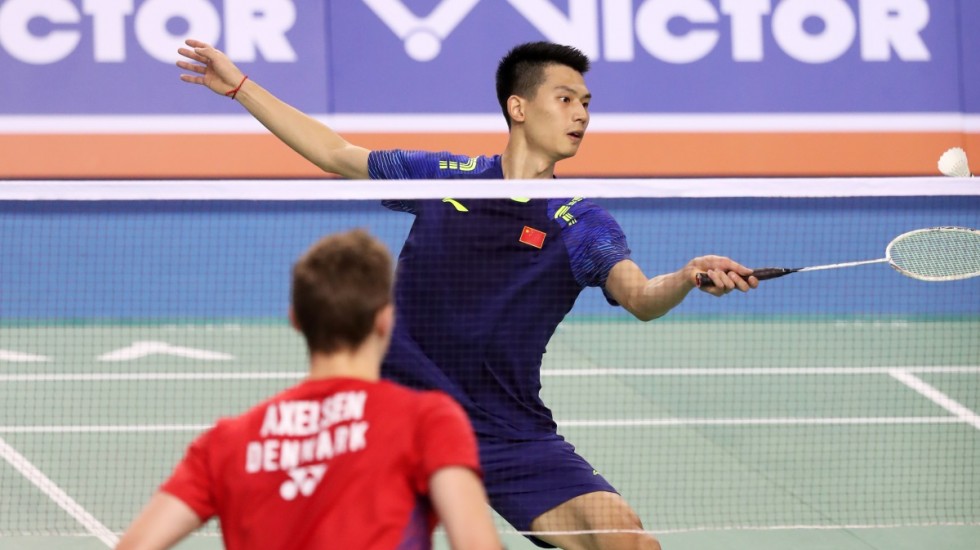 Top seeds in two categories crashed out in the second round of the VICTOR Korea Open 2018 today.

It was first the turn of Men’s Singles top seed Viktor Axelsen, who looked rather listless as he went down to China’s Zhao Junpeng (featured image) in straight games. 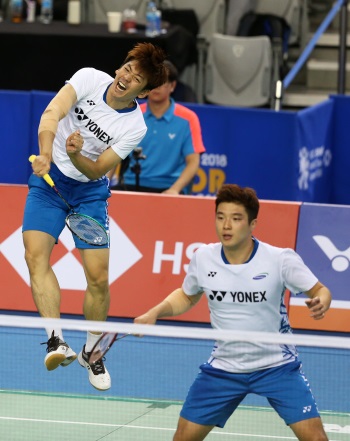 Then Men’s Doubles top seeds Takeshi Kamura and Keigo Sonoda – silver medallists at the World Championships – fell to a pair who has been the talk of the event. Home duo Lee Yong Dae and Kim Gi Jung, who are playing only their second international event of the year, were on fire again today as they took down Kamura and Sonoda in comprehensive fashion, 18-21 21-10 21-9.

From the start, it was apparent that the Koreans would be a handful for the World No.4 Japanese. They kept a lead until the end of the opening game, after which Kim blew a couple of winning shots and the game swung Japan’s way.

But Lee was unflappable, and soon his high-quality play – in defence and the serve-return situations – started to wear down the Japanese. Calmly driving back whatever was thrown at him, and creating vacant spaces with the angles and variations of his return, Lee was masterly, allowing Kim the openings he could fire his big smashes into. Kim, for his part, rushed a few shots, but overall the Koreans simply blew away the Japanese in the second and third games. Kamura crumbled under the sustained pressure of the Korean defence that barely did a thing wrong.

Asked if, having beaten the World Championships runners-up, the Koreans were already on par with the best, Lee said: “Of course, we too were once top-ranked players so we know what it’s like and we have the experience in these kinds of matches.  Also, this Japanese team in particular is a team we have a lot of experience playing against, so this win comes against that backdrop.”

His partner acknowledged he was still struggling to find his best form: “This is my first Korea Open in two years and at the beginning of the first game today I was really nervous and made a lot of mistakes. I was rushing things. Then I managed to settle down and play the rest of the match more comfortably.

“Yong Dae has a lot more experience than I have and he is so good at managing the game and controlling the flow. This seems to make up for my weak points and it makes it easy for me to partner him. I’m not really a back-court player by nature but because he is so much better in the front court, I tend to stick to the back and our game works pretty well that way.”

Lee and Kim take on another Japanese pair – Takuro Hoki and Yugo Kobayashi – in the quarter-finals. 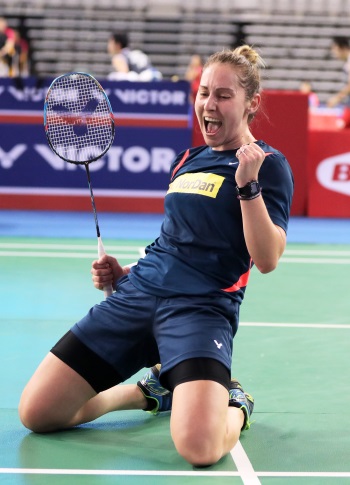 and earn four game points – but once Zhao saved all four and snatched the first game, the Dane’s play went steadily downhill. The capitulation was so abject that even Zhao came away nonplussed: “I can’t consider it a big upset because Axelsen made a lot of mistakes in the second game. I just stayed calm. I’d lost twice to him and I learnt from that. I haven’t done well in the top tournaments over the last two years as I was under pressure. Hopefully I will get better from now.”

Sixth seed Beiwen Zhang (USA) also had her back to the wall against another young Chinese, Cai Yanyan, who refused to buckle despite trailing in the second and third games. Zhang shook off her pursuer 15-21 22-20 23-21 and let out a long sigh of relief.

“It was so bad! I just couldn’t keep the shuttle inside,” the USA player exclaimed. “I was nervous! Her defence – I didn’t expect she could return so well. I was a bit shocked. I can’t find my rhythm now, I will just try to play my best and try to keep the shuttle inside. I’m a bit tired, so I’m not expecting too much.”

“The hall came into play a bit, it’s a bit windy in there and that means it’s anyone’s game,” said Gilmour. “The person who can control it a tiny bit better will take it. I think the trick was not to think about it too much, just try to play as free as possible.

“I’ve played Beiwen a few times, most recently the Indian League. It’s going to be interesting tomorrow, she’s very skilful. No match in this tournament can be easy. It’s when I start getting ahead of myself that’s bad news for me.

“My season has had ups and downs. The Indian League was a high and then the Commonwealth Games was a high, and then a couple of Asian tours where you become a member of the first round losers’ club. That’s tough, but when you start to link things like this, it proves it’s worth all the travel and everything.”