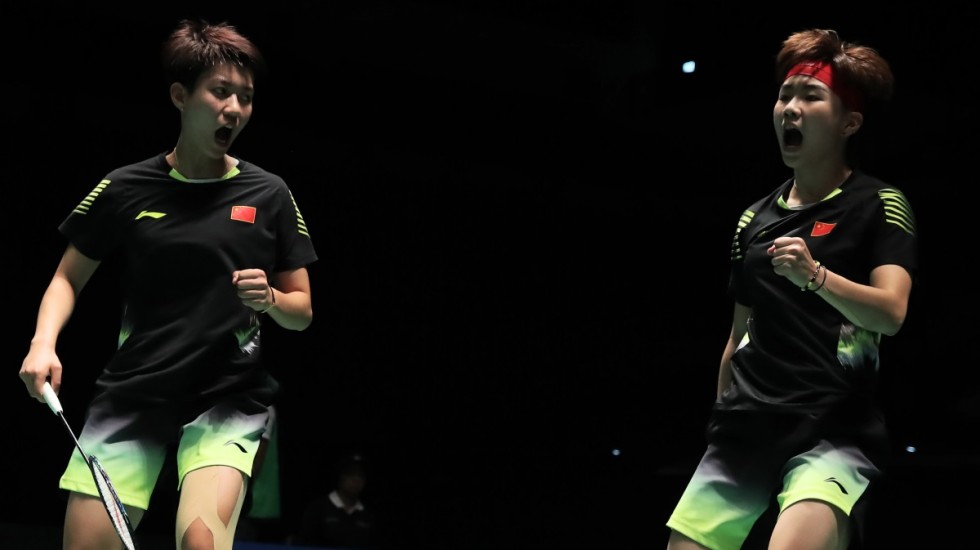 Khosit Phetpradab’s dream run at the DAIHATSU YONEX Japan Open 2018 continued, as he made his

first semi-finals at an event of this level today.

He will take on another surprise semi-finalist, Korea’s Lee Dong Keun, who got the better of seventh seed Kidambi Srikanth, while in the top half, defending champion Viktor Axelsen faces World champion Kento Momota (Japan). Momota will be bidding to become the first Japanese Men’s Singles champion at his home event. 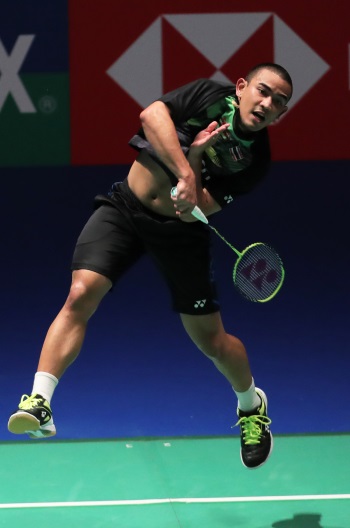 Phetpradab, who’d beaten All England champion Shi Yuqi in the opening round, continued in the same vein, showing tremendous reflexes on either flank and pouring on the pressure when he won the attack. Still, Chen appeared to have the opening game under control with a 17-11 lead before it all went wrong. The Thai then enjoyed a breezy spell, reeling off nine points in a row to overhaul his opponent; he earned match point with another terrific defensive shot off a kill that Chen would never had expected returned.

The Thai stayed tough in the second; full-stretch defence on either flank frustrating Chen as he went 13-17 down. Still, the Chinese did well to catch up and even had game point, but Phetpradab stood up to the challenge in a spellbinding rally. He finished off with a wicked smash that left Chen stranded mid-court.

Momota’s encounter with Lin Dan promised plenty for the connoisseur – after all, here was the sparkling new talent versus a wily legend. Their only previous meeting was three years ago, when Lin prevailed in straight games.

But it was a different Momota here, on the crest of a wave that has swept nearly everything in its path. Lin was at the receiving end of Momota’s youthful energy and masterly control – the Chinese found himself fighting a rearguard action all the way. Lin was in danger of losing in single digits in both games as Momota gave nothing away; his deep clears pinned Lin to the lines, and he had sufficient ammunition to pick points whenever he chose to. Lin just about got to double digits in the second: 21-8 21-10.

“I knew there were going to be a lot of long rallies,” said Momota. “I had to ensure I didn’t panic, and focussed on getting into my pace. It all went as I planned. Playing in Japan is special to me and there’s extra motivation to win.

“Lin Dan has been my idol since I was a boy. Before the match, I had two feelings. One was that I was very excited to play with him. Another was that I need to try to win. I had to manage both feelings. When I came inside the court, I tried to believe strongly I play better than my opponent. I kept the strong mental approach during the match. So I was able to play patiently through the match. I have been watching Lin Dan’s matches since I was a boy. While studying his game, I try to anticipate his tactics and move smoothly and fast. This win has made me confident. I want to keep this feeling for a while, but I have another tough match tomorrow. So I will prepare for it as my best.”

Lin Dan said his previous matches had slowed him down and promised a better showing in their next clash: “I didn’t have much stamina for today because of previous two matches. He was faster. Momota played very well with few mistakes. I think it was good for me to play him here because I was able to judge his game. We will play more often in the future. Next time I will play faster.” 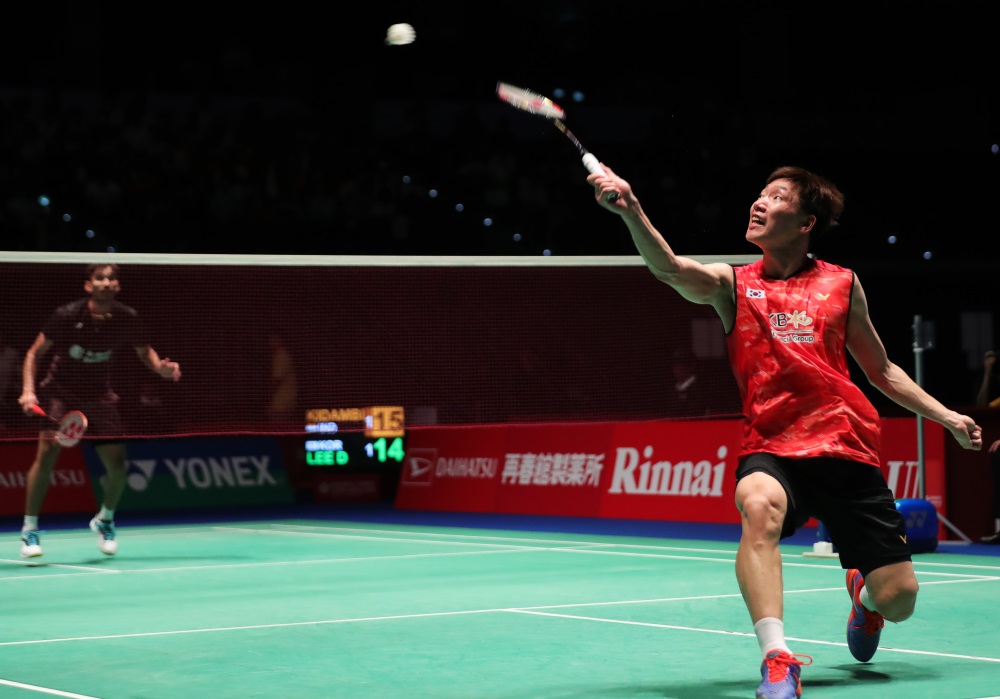 The big surprise in Women’s Doubles was the capitulation of World champions Mayu Matsumoto/Wakana Nagahara to China’s Du Yue/Li Yinhui (featured image). The eighth seeds, despite the home crowd rooting for them, were blown away, 21-16 21-10. The bottom half will be an all-Chinese affair, with Asian Games champions Chen Qingchen/Jia Yifan making their way past compatriots Tang Jinhua/Yu Xiaohan. Japan’s hopes will be shouldered by top seeds Yuki Fukushima/Sayaka Hirota, who take on Indonesia’s Greysia Polii/Apriyani Rahayu.

Women’s Singles will see an all-Japanese semi-final as Nozomi Okuhara and Aya Ohori made their way through in straight games. Okuhara was typically stubborn against attacking youngster Chen Xiaoxin, who had surprised top seed Tai Tzu Ying yesterday. Chen packed plenty of punch, but Okuhara had the experience to weather the assault. From 12-15 in the second, aided by a misjudgement by Chen, Okuhara stormed to the front: 21-17 21-16.

“She’s been in good form, she beat Tai Tzu Ying yesterday and I knew I was in for a hard match,” said Okuhara. “I was able to execute my game plan quite well.” 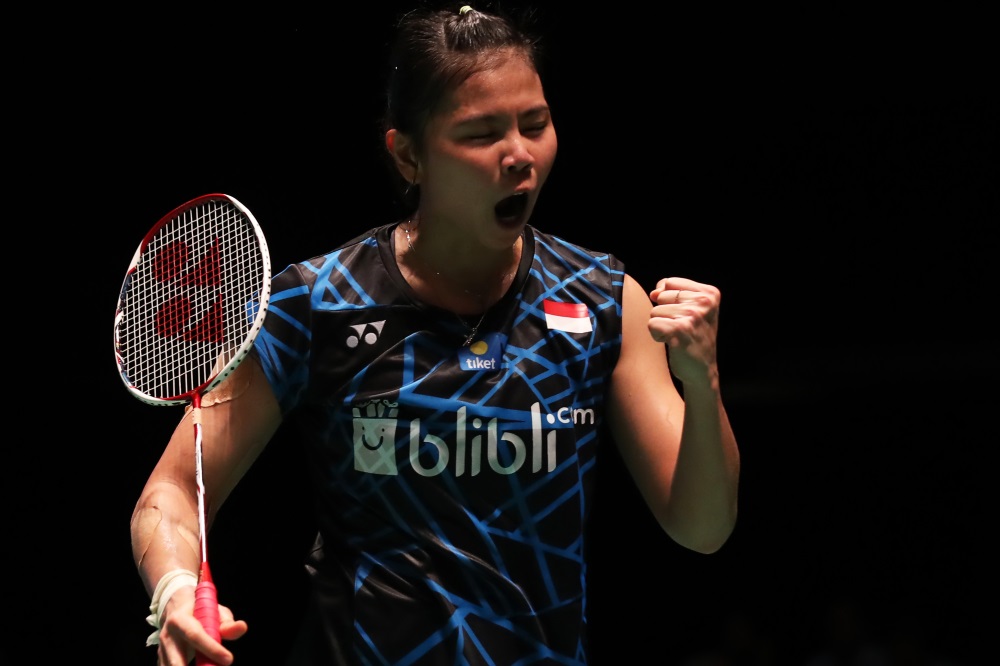 Still, China could take solace from Chen Yufei, who made the semi-finals with a gutsy 21-13 15-21 21-15 result over home heartthrob Akane Yamaguchi. Chen’s semi-final opponent will be World champion Carolina Marin (Spain), who held off Thailand’s Ratchanok Intanon 21-18 21-19.

Yamaguchi explained that she wasn’t at her best today: “I’m disappointed I lost today. Actually, I felt my body was heavy. In the first game, I couldn’t run as fast as I normally do. I got the second game because I tried to speed up but I couldn’t keep my speed in the deciding game.”