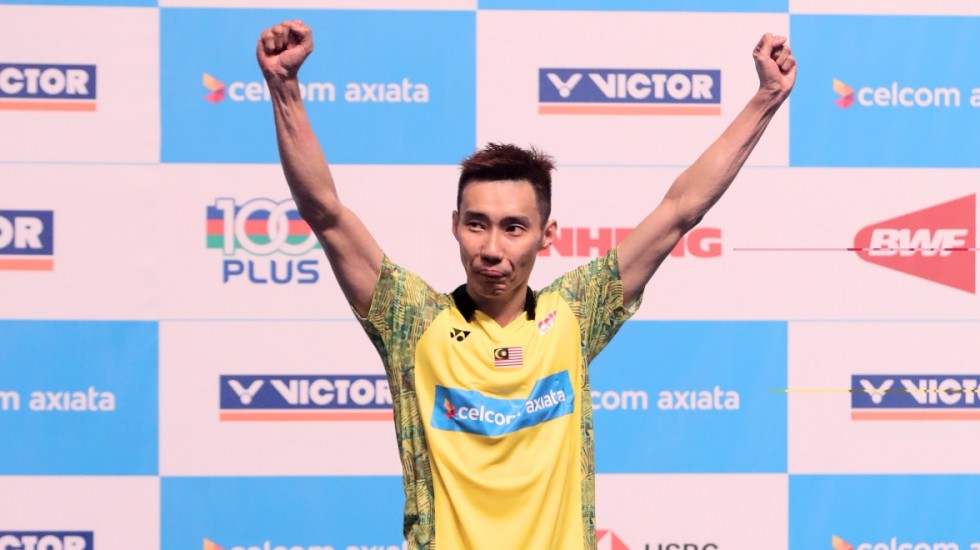 A dozen titles. Incredible as it sounds, the 12th title on home soil fell in place for Lee Chong Wei, continuing a saga that can rival any in sport for the magnitude of achievement at any single event. The final point in the riveting Men’s Singles final of the Celcom Axiata Malaysia Open 2018 was referred to the Instant Review System. The graphic showed that his rival Kento Momota’s shot had fallen long by a few millimetres. And then Lee Chong Wei collapsed on the floor, face down, and lay there a long time even as the crowd went delirious with joy.

Lee might have had 11 titles in the run-up to the final, but it was Momota who had captured most of the attention. The manner in which the Japanese dismantled his earlier challengers, and his unbeaten 21-match winning streak since March, boded ominously for the Malaysian, particularly as he was one of Momota’s victims at the Badminton Asia Championships. Recent form suggested that Lee would have a stiff fight on his hands.

And yet, it was Lee who kept a mesmeric hold of the game. The Japanese was prevented from unleashing his whippy, sharp smash; he was kept off-balance and guessing with the variations in pace and angles. On a couple of occasions the Asian champion was left stranded, unable to guess the soft shots that Lee alternated with his bread-and-butter jump smash.

Having pocketed the first, Lee stepped on the gas and Momota was looking out of it at 6-12.

The Japanese, though, wasn’t done. Lee was too casual with a backhand and that helped Momota to a good run of points, helping him catch up at 18. Two misjudgements by Lee gave Momota two game points, but each time Lee came up with brilliant attacking badminton. Luck smiled his way when his rasping shot took the net tape and died on the other side; luck smiled a second time when a Momota shot fell near the line. Lee took a gamble and let it fall; the line judge called it in and Lee challenged the call. The packed stadium chanted “out” in unison. And that’s what showed up on screen as the shuttle was seen to land a hair’s breadth wide of the line. “It’s sort of a record-filled year,” said Lee. “Winning a 12th Malaysia Open title in front of your home fans is never easy. I was under so much pressure coming into this tournament. Momota had a 21-match winning streak and I’d lost to him in our previous meeting, so it wasn’t easy. But this is my own challenge. I always challenge myself, because I’m no longer 26.”

Momota was all admiration for his vanquisher: “He changed the game today, compared to our last meeting. Today he played several variations at the net, and he was fast and powerful in his smashes. Even though he is 13 years older than me, he is still very strong and I have a lot of respect for him.” Chinese Taipei’s Tai Tzu Ying pocketed her fourth straight title this year, repelling an initial burst from China’s He Bingjiao before breezing through, 22-20 21-11.

The Women’s Singles final began with a flurry of punches as neither He Bingjiao nor Tai held back. It was fast and attacking badminton from both ends, with Tai’s trickery conspicuously missing. The Chinese held her own and was within grasp of the first game with a 20-17 lead.

Tai stayed composed and fired one winner after another, drawing level with a held-back shot that unsettled her opponent. With the first game in her bag, the World No.1 stepped up a level – suddenly the wristy trickery was back, and He Bingiao was left flailing hopelessly as the shuttle enticingly kept dropping just beyond her reach. It was a decimation at 15-3, but the Chinese managed to make the score respectable thanks to her opponent who was generous in her errors.

“I’d given up when I was 17-20 down in the first game; I told myself to just stay in the game,” Tai said. “I made too many errors and fell behind, but fortunately I could steady myself.”

Kamura and Sonoda were unchallenged throughout, leading from start to finish. The experienced duo needed just 30 minutes to complete the 21-8 21-10 rout. The Women’s Doubles final, a battle between the Olympic champions and the World champions, was one-way traffic in favour of Matsutomo and Takahashi from the start. The Japanese were, true to nature, rock-solid in the rallies and drew the errors from their exasperated opponents, who just couldn’t find a way past them today.

The feature of the Japanese performance was their symphonic movement, with instinctive understanding of the other’s position and the opportunities that opened up. Chen and Jia were left contemplating one of their worst defeats in recent times: 21-12 21-12. China were assured of the Mixed Doubles gold, with Zheng Siwei and Huang Yaqiong taking on compatriots Wang Yilyu and Huang Dongping.

Asian champions Wang and Huang stayed close to their opponents in the opening game, but as the match wore on, Huang found it increasingly harder to parry Zheng’s smashes directed at her. She was given no leeway at the front either, with her opposite number Huang Yaqiong a picture of steadiness as she calmly controlled the net and put away any errant shuttle.

Almost inevitably, it was a Zheng smash at Huang Dongping that gave the fourth seeds match point, and yet another smash that clinched the issue: 21-19 21-18.